480 BC Spartan soldiers made an heroic last stand against the Persians at the pass at Thermopylae. 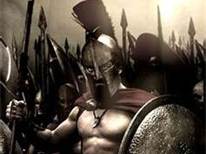 43 BC Octavian, later known as Augustus, compelled the Roman Senate to elect him Consul.

312 Roman emperor Constantine the Great supposedly saw a vision of a cross and the words, "In this sign conquer," which caused him to eventually embrace Christianity.

1274 Edward I was crowned King of England.

1561 An 18-year-old Mary, Queen of Scots, returned to Scotland after spending 13 years in France.
Posted by Mary Ann Bernal at 8:19 AM