On October 14
222 Pope Callixtus I was killed by a mob in Rome's Trastevere (west bank of the Tiber River) after a 5-year reign in which he had stabilized the Saturday fast three times per year, with no food, oil, or wine to be consumed on those days. Callixtus was succeeded by Cardinal Urban I.
530 Boniface became sole pope. The brief schism that had resulted from both Boniface II and Dioscorus being consecrated as pope ended with Dioscorus' death.
996 Hugh Capet, the French king and founder of the Capetian line, died in Paris at age 56.
1066 Norman Conquest: Battle of Hastings – In England on Senlac Hill, seven miles from Hastings, the Norman forces of William the Conqueror defeated the English army and killed King Harold II of England. 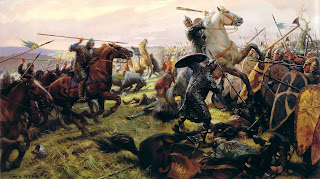 Battle of Hastings
1322 Robert the Bruce of Scotland defeated King Edward II of England at Byland, forcing Edward to accept Scotland's independence.
1586 Mary, Queen of Scots, went on trial for conspiracy against Elizabeth I of England.
Posted by Mary Ann Bernal at 6:05 AM