December 19,
211 Publius Septimius Geta, co-emperor of Rome, was murdered.
324 Licinius abdicated his position as Roman Emperor.
1075 - Edith of Wessex, wife of Edward the Confessor of England, died.
1154 Henry II of England was crowned at Westminster Abbey. 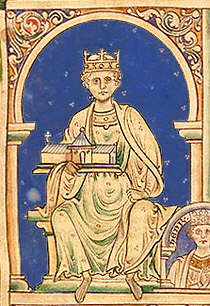 Henry II
1187 Clement III became Pope. The fall of Jerusalem to Saladin in the Third Crusade occurred during his pontificate.
1490 Anne, Duchess of Brittany, was married to Maximilian I, Holy Roman Emperor by proxy.
1551 The Dutch west coast was hit by a hurricane.
Posted by Mary Ann Bernal at 6:43 AM