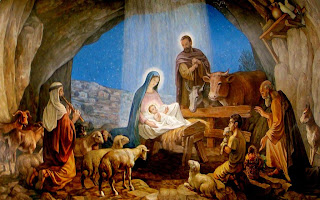 498 French king Clovis baptized himself.
597 England adopted the Julian calendar.
795 Pope Adrian I died. The relationship of Adrian to Charlemagne was considered an ideal expression of Church and State in a united Christian society.
800 Charlemagne, King of the Franks, was crowned the first Holy Roman Emperor by Pope Leo III in Rome.
875 Charles the Bald was crowned Holy Roman Emperor.
1066 William the Conqueror was crowned king of England, at Westminster Abbey, London.
1100 Baldwin of Boulogne was crowned the first King of Jerusalem in the Church of the Nativity.
1156 Peter the Venerable died. As Abbot of Cluny, Peter of Montboissier made great reforms to the monastery that restored its influence in European religious politics.
1223 St. Francis of Assisi assembled the first Nativity scene.
1559 Pius IV was elected pope. Born Giovanni Angelo de'Medici, Pius concluded the Council of Trent and pursued reforms of the Papal Curia.
Posted by Mary Ann Bernal at 6:13 AM