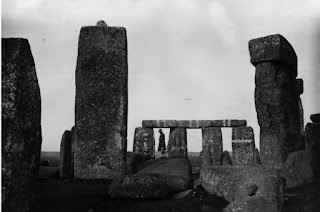 Built in several stages, Stonehenge began about 5,000 years ago as a simple earthwork enclosure where prehistoric people buried their cremated dead. The stone circle was erected in the centre of the monument in the late Neolithic period, around 2500 BC
• Two types of stone are used at Stonehenge: the larger sarsens, and the smaller bluestones. There are 83 stones in total
• There were originally only two entrances to the enclosure, English Heritage explains – a wide one to the north east, and a smaller one on the southern side. Today there are many more gaps – this is mainly the result of later tracks that once crossed the monument
• A circle of 56 pits, known as the Aubrey Holes (named after John Aubrey, who identified them in 1666), sits inside the enclosure. Its purpose remains unknown, but some believe the pits once held stones or posts
• The stone settings at Stonehenge were built at a time of “great change in prehistory,” says English Heritage, “just as new styles of ‘Beaker’ pottery and the knowledge of metalworking, together with a transition to the burial of individuals with grave goods, were arriving from Europe. From about 2400 BC, well furnished Beaker graves such as that of the Amesbury Arche are found nearby”
• Roman pottery, stone, metal items and coins have been found during various excavations at Stonehenge. An English Heritage report in 2010 said that considerably fewer medieval artefacts have been discovered, which suggests the site was used more sporadically during the period
• Stonehenge has a long relationship with astronomers, the report explains. In 1720, Dr Halley used magnetic deviation and the position of the rising sun to estimate the age of Stonehenge. He concluded the date was 460 BC. And, in 1771, John Smith mused that the estimated total of 30 sarsen stones multiplied by 12 astrological signs equalled 360 days of the year, while the inner circle represented the lunar month
• The first mention of Stonehenge – or ‘Stanenges’ – appears in the archaeological study of Henry of Huntingdon in about AD 1130, and that of Geoffrey of Monmouth six years later. In 1200 and 1250 it appeared as ‘Stanhenge’ and ‘Stonhenge’; as ‘Stonheng’ in 1297, and ‘the stone hengles’ in 1470. It became known as ‘Stonehenge’ in 1610, says English Heritage
• In the 1880s, after carrying out some of the first scientifically recorded excavations at the site, Charles Darwin concluded that earthworms were largely to blame for the Stonehenge stones sinking through the soil
• By the beginning of the 20th century there had been more than 10 recorded excavations, and the site was considered to be in a “sorry state”, says English Heritage – several sarsens were leaning. Consequently the Society of Antiquaries lobbied the site’s owner, Sir Edmond Antrobus, and offered to assist with conservation
To read more about Stonehenge, click here.
Posted by Mary Ann Bernal at 5:00 AM