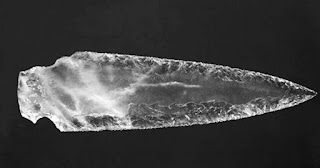 Archaeologists in Spain have unearthed an extremely rare set of weapons, including a long dagger blade, twenty-ﬁve arrowheads and cores used for creating the artifacts, all made of crystal! The finding was made inside megalithic tombs dating to the 3 rd millennium BC in the southwest of Spain.

An excavation of megalithic tombs in Valencina de la Concepción in Spain led to the dramatic discovery of the rare relics, which experts described as exceptional and magnificently well-preserved. The objects are estimated to be over five thousand years old (dating back to at least 3000 BC). As Signs of the Times reports , the Montelirio tholos, excavated between 2007 and 2010, is a great megalithic construction which extends nearly 44 meters (144 ft) in total, constructed out of large slabs of slate. At least 25 individuals were found within the structure. Analyses suggested that there was one male and numerous females who had drunk a poison substance. The remains of the women sit in a circle in a chamber adjacent to the bones believed to be of their chief. 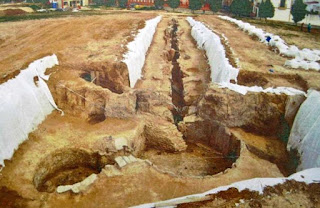 Incredible Crystal Arrowheads
They also found "an extraordinary set of sumptuous grave goods...the most notable of which is an unspecified number of shrouds or clothes made of tens of thousands of perforated beads and decorated with amber beads,” according to the study.

In addition to the human remains and textiles, the archaeologists found the large hoard of crystal arrowheads. The fact that they were discovered altogether indicates that they could have been a ritual offering at an altar. The arrowheads have the distinctive long lateral appendices of flint arrowheads from the region, but archaeologists noted that even greater skill must have been required to produce these unique features when using rock crystal.

Corpse of a Young Male Discovered in Second Structure
In a second structure, also constructed from slate slabs and dubbed 10.042-10.049, archaeologists discovered the corpse of a young individual estimated to have been between 17 and 25 years of age at the time of his death. The body was lying in a fetal position encircled by a large set of valuable objects. These included an elephant tusk laid above the young man’s head, a set of twenty-three flint blades, and several ivory artifacts. As Signs of the Times reports the experts mentioned, “The rock crystal dagger blade appeared in the upper level of Structure 10.049 of the PP4-Montelirio sector, in association with an ivory hilt and sheath, which renders it an exceptional object in Late Prehistoric Europe… The blade is 214 mm in length, a maximum of 59 mm in width and 13 mm thick. Its morphology is not unheard of in the Iberian Peninsula, although all the samples recorded thus far were made from flint and not rock crystal.” 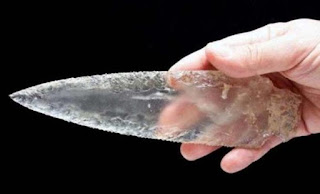 Crystal Weapons Belonged to a Few Elite Individuals
After examining the finds closely, archaeologists observed that the weapons are almost of the same shape as the flint arrowheads that were pretty common in that region during that time. However, the fact that there are not any crystal mines near the area, implies that the skillful builders of the crystal weapons possibly traveled for many miles to find the material they needed for the construction of their weapons and tools. The shortage of crystal also suggests that these weapons were destined for a select group of people. According to Signs of the Times , experts report in the study, “The more technically sophisticated items, however, were deposited in the larger megalithic structures…As such, it is reasonable to assume that although the raw material was relatively available throughout the community…only the kin groups, factions or individuals who were buried in megaliths were able to afford the added value that allowed the production of sophisticated objects such as arrow heads or dagger blades.”

In conclusion, the experts taking part in the study concerning rock crystal, conﬁrmed Valencina's status as an exceptional location with a high concentration of exotic raw materials and rare products coming from all over Iberia.

By Theodoros Karasavvas
Posted by Mary Ann Bernal at 4:00 AM