Did a Native American travel with the Vikings and arrive in Iceland centuries before Columbus set sail? 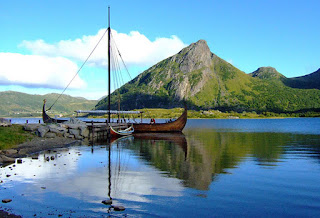 Scientists have been searching for answers on the puzzles of history by sifting through the genetic code of certain Icelanders. They have been looking to see if a Native American woman from the New World accompanied the Vikings back to Europe, five centuries before Columbus arrived back in Spain with indigenous Native Americans.

It is well established through historical accounts and archaeological findings that Vikings set up initial colonies on the shores of North America just before 1000 A.D. But what is not known for certain is how a family of Icelanders came to have a genetic makeup which includes a surprising marker dating to 1000 A.D. — one which is found mostly in Native Americans.

In 2010, it was reported that the first Native Americans arrived on the continent of Europe sometime around the 11th century. The study, led by deCODE Genetics, a world-leading genome research lab in Iceland, discovered a unique gene that was present in only four distinct family lines. The DNA lineage, which was named C1e, is mitochondrial, meaning that the genes were introduced by and passed down through a female. Based on the evidence of the DNA, it has been suggested that a Native American, (voluntarily or involuntarily) accompanied the Vikings when they returned back to Iceland. The woman survived the voyage across the sea, and subsequently had children in her new home. As of today, there are 80 Icelanders who have the distinct gene passed down by this woman.

Nevertheless, there is another explanation for the presence of the C1e in these 80 Icelanders. It is possible that the Native American genes appeared in Iceland after the discovery of the New World by Columbus. It has been suggested that a Native American woman might have been brought back to mainland Europe by European explorers, who then found her way to Iceland. Researchers believe that this scenario is unlikely, however, given the fact that Iceland was pretty isolated at that point of time.

Nevertheless, the only way to effectively eliminate this possibility is for scientists to find the remains of a pre-Columbian Icelander whose genes can be analyzed and shown to contain the C1e lineage. 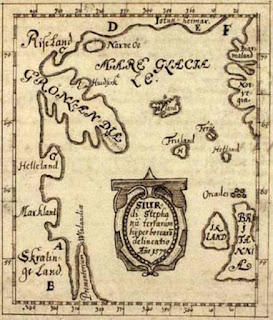 Another problem facing the researchers is that the C1e genes might not have come from Native Americans, but from some other part of the world. For instance, no living Native American group has the exact DNA lineage as the one found in the 80 Icelanders. However, it may be that the Native American people who carried that lineage eventually went extinct.

One suggestion, which was proposed early in the research, was that the genes came from Asia. This was eventually ruled out, as the researchers managed to work out that the C1e lineage had been present in Iceland as early as the 18th century. This was long before the appearance of Asian genes in Icelanders. 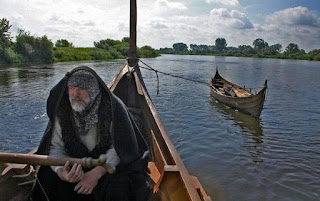 Did a Native American travel to Iceland and leave behind a telltale genetic marker? A man helms replica Viking vessels. Wikimedia Commons

The more digging is done into the history of the Vikings, the more our perceptions are changing as to how they lived, travelled, and traded.

Hopefully more light will be shed on this mystery over time, and the goings-on of the historic world can be unequivocally established, giving us a clearer understanding of our ancient past.

References
Firth, N., 2010. First American in Europe 'was native woman kidnapped by Vikings and hauled back to Iceland 1,000 years ago'.

By Ḏḥwty
Posted by Mary Ann Bernal at 2:30 AM