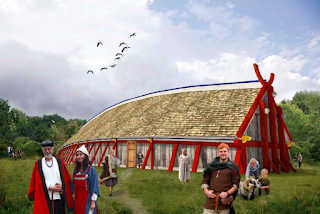 Was this how the royal hall in Lejre was painted? (Photo: Sagnlandet Lejre)

Recently, Danish archaeologists attended the seminar “Farverige Vikinger” (Colorful Vikings) discussing the colors on a reconstructed royal hall dating back to the Viking Age. The outcome was colorful disagreement and frustration.

In 2009, archaeologist excavated a royal hall in Lejre, Denmark, which turned out to be one of the largest Viking Age buildings ever discovered.

Now, the 60 meters long and oval-shaped longhouse made of oak is under reconstruction and no one with certainty can tell if it was painted, and if so, in which colors.

Although there are found a number of painted Viking Age wooden objects that might reveal the color fashion of the time period, you never can be absolutely certain, says chemist Mads Christian Christensen at the National Museum of Denmark to Danish research portal videnskap.dk.

Whitewashed Theory
Some archaeologists who participated in the seminar put forward a completely different theory when it came to Viking Age colors: The wooden houses, at least the royal halls, were gleaming white.

The rationale is that there are found traces of white chalk in the remains of the royal halls of Tissø and Lejre, and consequently it is likely that Viking houses were whitewashed.

The archaeologist who promoted the theory said that white houses are visible from a long distance, functional as both a status symbol and landmark.

Moreover, indoor and outdoor chalking would both serve as efficient insulation and provide a better indoor climate.

It was also argued that white chalking would provide more light in the dark months of the year.

The theory has some weaknesses, partly because a white-painted house in winter, in a dark and snowy Scandinavia, would “totally disappear”.

There are numerous references from both archaeological findings and the Norse sagas documenting the Vikings’ use of strong colors:

Both shields, ships, sails and other equipment were painted in strong colors. Blue in particular, but also red and yellow (gold) were popular among the Norsemen. 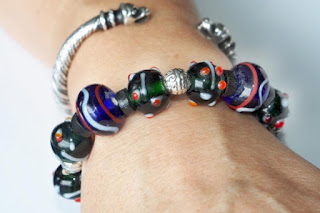 The discoveries made in the Oseberg and Gokstad burial mounds documents the use on several wooden objects, clothes and tapestries.

During the 1904 Oseberg ship excavation, extremely good preservation conditions made the archaeologists able to see the colors clearly, but sadly, they quickly faded being exposed to light and air.

The Oseberg burial chamber was decorated with colorful tapestries showing dramatic scenes and many of the beautiful wooden objects were painted.

The Vestfold County Municipality in Norway writes about the famous Gokstad ship and Viking Age colors on their homepage:

On the Gokstad ship, shields were attached to the sides. These alternated between yellow and black, first one, then the other.

The same colors were evident on the tent poles found aboard ship. Remains of painted shields also have been in a ship grave at Ballateare on the Isle of Man and Grimstrup in Denmark, and both the Oseberg and Bayeux tapestries depict colored shields.

The three upper strakes of the Ladby Ship also were painted, two of them blue with the middle one in yellow. The Grønhaug ship on Karmøy had triangular areas carved into it, painted black.

There are also found a number of variegated and strong colored glass beads from the time-period – something that should convince archaeologists that the Vikings were colorful people.

Text by: Thor Lanesskog, ThorNews
Posted by Mary Ann Bernal at 1:30 AM