The Head of an Emperor, the Shrine of a God: Two Contrasting Finds at the Egyptian Sites of Luxor and Aswan 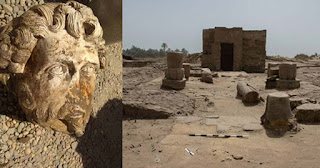 Recent discoveries at two of the major ancient sites in Egypt emphasize the diversity of culture and power that existed in the region over time. In Aswan, the head of a marble statue of the Roman Emperor Marcus Aurelius was uncovered, while at the Karnak Temple site of Luxor, a Late Period shrine to the god Osiris was found.

An Out of Place Shrine
In an announcement yesterday, the Egyptian Ministry of Antiquities told of the two recent finds. At the Luxor site, researchers with the Archaeological Egyptian Mission from the Ministry of Antiquities working at the southern part of Karnak Temples’ 10th pylon uncovered ‘architectural elements’ of a shrine or chapel of god Osiris (or Osiris-Ptah-Neb). This was a surprise discovery, as other Osiris compartments have only been found in the northern or eastern parts of temples.

The Ministry of Antiquities announcement records Dr Ayman Ashmawy, Head of Ancient Egyptian Antiquities Sector as highlighting the importance of the shrine at this location.

According to Dr Ashmawy, “the shrine is one of the most important shrines to be constructed for god Osiris inside the temples of Karnak during the Late Period, because it is located at the southern side of god Amun-Re Temple and not to the east or north side as known in the ancient Egyptian belief.” 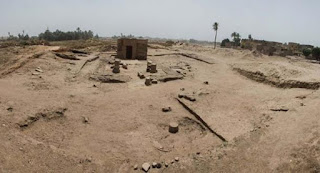 Panorama of the Osiris shrine that has be uncovered in Luxor. (Image: Ministry of Antiquities)

Dedicated to the Dead
Osiris was a prominent god in the Egyptian pantheon . He was born of Geb and Nut, along with his siblings; Set, Isis, and Nephthys. He is believed to have been the first ruler of Egypt but was murdered by his brother, Set, and eventually became the god of the Underworld.

The exact location of the shrine is to the south of the 10th pylon of god Amun-Re temple, in the area between the temples of Amun and Mut, to the east of the Avenue of Sphinxes. According to Essam Nagy, Head of the Mission, the shrine dates back to the late 25 th Dynasty which might help explain its unconventional location. In this period, the god appears to have had important links to the Avenue of the Sphinxes and Mut Temple.

The announcement includes photos of the shrine ruins, showing the architectural elements that were found. These are an entrance building, foundations including those of a third room, the remains of columns, and paving stones from the shrine floor. 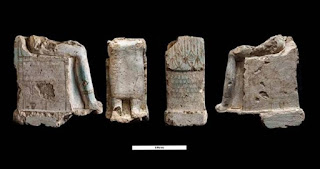 Collection of pottery found at the shrine site. (Image: Ministry of Antiquities)

Nagy also mentions some of the artifacts that have been found include a collection of pottery, the lower part of a statue, and part of a stone relief which depicts an offering table along with a ram and a goose and a winged sun-disk. The ram and the goose are symbols of the god Amun who is the master of the Karnak temples. 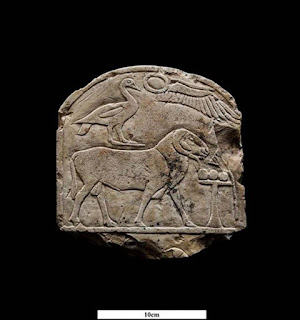 The site at Karnak is made up of many temples and was the most important religious site in ancient Egypt. Many consider it to continue to be Egypt’s most significant ancient site.

The shrine can be fairly confidently dated, as it depicts the names of Kings Taharka and Tanout Amun, the last king of the 25th Dynasty (the Nubian Dynasty), in the 7th century BC.

Head of an Emperor

The second noted find, that occurred in Aswan, was the marble head of Roman Emperor Marcus Aurelius, a rare find in the area, according to Dr Ashmawy. The head could once have been part of a statue or a bust and shows the emperor, as he is represented in many other statues, with wavy hair and a beard. As is so often the case, the nose is now absent.

The find was made at the Temple of Kom Ombo as a result of work being carried out to protect the site from groundwater damage. This complex was constructed in the Ptolemaic Dynasty and additions were made in the Roman period. 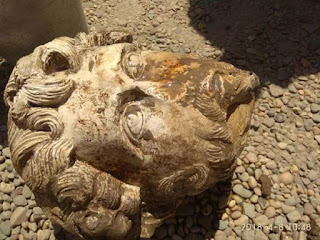 The Head of Roman Emperor Marcus Aurelius that was found in the Temple of Kom Ombo, Aswan. (Image: Egyptian Ministry of Antiquities)

Marcus Aurelius was the 16 th emperor of Rome and reigned from 161 AD until 180 AD. This was over two centuries into the Roman rule of Egypt, which began after the death of Queen Cleopatra VII in 30 BC.

Although discovered in different spots and with around a millennium and several changes of power separating them, the contrast of these finds provides a good example of how this territory was contested and ruled by many differing empires during this period in its history.

By Gary Manners
Posted by Mary Ann Bernal at 1:30 AM