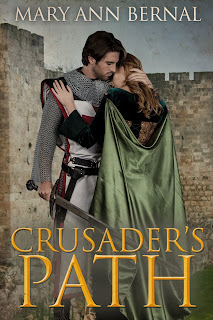 Available for pre-order from
Amazon UK and Amazon US

Tell us about your latest book

Crusader’s Path is set during the First Crusade (1096-1099). Etienne d’Argences and his overlord, Duke Robert of Normandy, embark on a quest for redemption, joining Pope Urban’s Soldiers for Christ, and freeing the Holy Land from Muslim rule. Urban proclaimed that anyone dying during the arduous journey or on the battlefield were absolved of their sins.

Avielle of Cologne, a healer, ministering to the city’s ostracized lepers, needs to reconcile herself with God after committing a grave sin known only to herself and the Lord. Not daring to reveal her shameful secret in the confessional, absolution is unattainable until she hears Peter of Amiens preaching in the market square. Now, salvation is within reach. Avielle joins Peter’s Army and travels with the holy monk through the Rhine Valley, en route to the Byzantine Empire.

Etienne and Avielle meet in Constantinople, and together, they withstand the hardships of the grueling campaign, enduring privation for the Lord’s sake, to save their souls. But promises made to God are cast aside when they succumb to the temptation of the flesh, forsaking their vows of living a religious life for worldly pursuits.

With each successful siege as the Princes’ Army approaches Jerusalem, Etienne and Avielle struggle to realize spiritual purity over earthly desire.

What is your preferred writing routine?

My routines have varied over the years because of daily commitments. I have burned the midnight oil, arisen at the crack of dawn, and started writing the moment I came home from work. Now, whatever the hour, my goal is to write a few hours while not paying attention to a daily word count. It is less stressful if you set a reasonable goal. I always achieve my minimum word count of two hundred fifty words, but of course, I do not stop until what I want to say has been written.

What advice do you have for new writers?

My advice is to learn as much as you can about the craft. Enroll in creative writing courses and workshops and write a little every day. Two hundred fifty words a day is a novel in a year. Also, forget the naysayers and never give up.

What have you found to be the best way to raise awareness of your books?

Social media is perfect for author visibility. In addition to my webpage, I showcase my work on my blog and Pinterest. I also have a Twitter account where I share not only my work and the work of other authors but also topics that interest me.

Tell us something unexpected you discovered during your research

Crusader’s Path follows Duke Robert of Normandy’s participation in the Crusade. He joined the campaign late and spent the winter in Italy before heading out for Constantinople. He also left the siege of Antioch during the winter months, returning in the spring only after being threatened by excommunication.

What was the hardest scene you remember writing?

Death scenes are always tricky because I do love my characters; we share a bond; after all, I created them! The Crusades was a violent time, and people die. I won’t go into greater detail other than to say, “No Spoilers.”

What are you planning to write next?

I am planning on a novel set in Ancient Rome. As my readers know, I have a fascination with the Roman Empire. I’m always referencing the old Roman ruins in my novels. But which Emperor to follow? The jury’s still out. 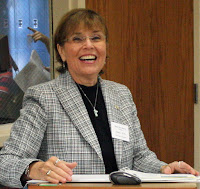 Mary Ann Bernal attended Mercy College, Dobbs Ferry, NY, where she received a degree in Business Administration. Her literary aspirations were ultimately realized when the first book of The Briton and the Dane novels was published in 2009. In addition to writing historical fiction, Mary Ann has also authored a collection of contemporary short stories in the Scribbler Tales series and a science fiction/fantasy novel entitled Planetary Wars Rise of an Empire. Mary Ann is a passionate supporter of the United States military, having been involved with letter-writing campaigns and other support programs since Operation Desert Storm. She has appeared on The Morning Blend television show hosted by KMTV, the CBS television affiliate in Omaha, and was interviewed by the Omaha World-Herald for her volunteer work. She has been a featured author on various reader blogs and promotional sites. Mary Ann currently resides in Elkhorn, Nebraska. Find out more at her website http://www.maryannbernal.com/ and find her on Twitter @BritonandDane