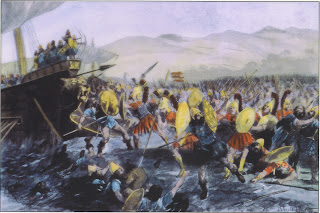 490 BC The Greeks under Miltiades decisively defeated the army of Darius I of Persia at the Battle of Marathon.
19 BC Virgil, the great Roman poet, died in Rome at age 50.
454  Falvius Actius, Roman general and statesman was born.
1192 Richard I the Lion hearted was captured near Vienna by Leopold V, Duke of Austria who accused Richard of arranging the murder of his cousin Conrad of Montferrat.
1327 Edward II of England was murdered by order of his wife Isabella, daughter of King Philip IV of France.
1435 An agreement between Charles VII of France and Philip the Good ended the partnership between the English and Burgundy in the Hundred Years' War.
1745 A Jacobite army under 'Bonnie Prince Charlie' defeated government forces at the Battle of Prestonpans.