Spotlight on Donovan Cook, author of Son of Anger (The Ormstunga Saga, Book 1) 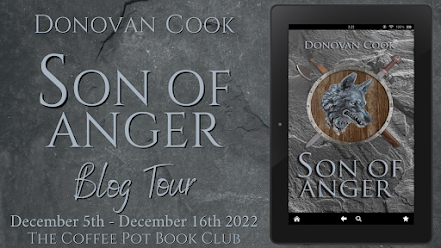 Ulf is like a storm, slowly building up its power, he grows more dangerous with each passing moment. And like all storms, he will eventually break. When he does, he will destroy everything in his path.

Ulf is one of a long line of famous Norse warriors. His ancestor Tyr was no ordinary man, but the Norse God of War. Ulf, however, knows nothing about being a warrior.

Everything changes when a stranger arrives on Ulf’s small farm in Vikenfjord. The only family he’s ever known are slaughtered and the one reminder of his father is stolen -- Ulf’s father’s sword, Ormstunga. Ulf’s destiny is decided.

Are the gods punishing him? All Ulf knows is that he has to avenge his family. He sets off on an adventure that will take him across oceans, into the eye of danger, on a quest to reclaim his family’s honour.

The gods are roused. One warrior can answer to them. The Son of Anger. 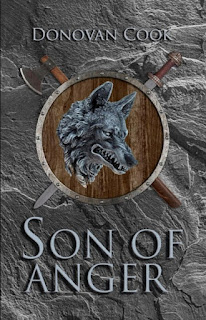 This book is available on #KindleUnlimited.

I was born in South Africa and lived in a small town near Johannesburg called Springs. My family moved to England when I was fourteen years old, which was a bit of a culture shock for my younger brother and me. My passion for history started in England, especially medieval history. I can speak two languages, Afrikaans and English, which is a result of my family background. My mother is South African, and my father is English. I’m keen on rugby, watching, not doing, but I enjoy watching other sports as well. I live with my wife and Viking French bulldog, Joey Missing-Tooth.

I started writing in 2019. In fact, my wife and I were on holiday in Montenegro when I wrote the first words of my debut novel. I had been struggling for a while to find the right words, and the opening scene came to me while we were on holiday. I quickly grabbed my laptop and typed as fast as I could while enjoying the beach view from our hotel room balcony.

Tell us about Son of Anger.

Son of Anger is about bloody battles, chaotic journeys, and interfering gods. It is also about Ulf, a young man who lost his family and an important family heirloom, his father’s famous sword. On his journey to avenge his family and retrieve the sword, he learns more about his family history and the story of the sword he coveted his whole life. All Ulf cares about is finding and killing the man who brutally murdered his family, but he soon learns there is a price for everything, and that price is especially high when you catch the eye of Odin, father of the gods of Asgard.

I’d have to say religion played a huge part in inspiring me to write Son of Anger. I am not religious myself, but I come from a religious family, and I regularly saw how religion affected the lives of my family. This made me wonder how the Norse people in the 9th century viewed their world through the eyes of the gods they followed. The Norse gods were chaotic, and the sagas of the gods are filled with bizarre stories that leave you scratching your head. So I was intrigued about how this would affect their daily lives. Viking history also inspired me and reading novels by Bernard Cornwell, Giles Kristian, and Matthew Harffy encouraged me to learn more about the Norse and Danish invaders who played a huge part in the creation of England and the English language. Writing Son of Anger gave me the opportunity to learn more about these people and what their lives would have been like.

I’m quite a lazy person, to be honest, so when I’m not writing or reading, I tend not to do much. If the weather is nice, my wife and I will take our dog out for walks. We often go to our local park and just sit on a bench and enjoy the weather. As mentioned before, I enjoy watching sports, especially rugby. Being born in South Africa, I follow the Springboks and try not to miss any of their matches. I also watch the United Rugby Championship every weekend when it’s on. If the weather is bad and there is no rugby to watch, then I might play some computer games or watch a film.

And finally, can you tell us some fun facts about yourself, such as crossed skydiving off your bucket list?

1) I have a BSc in Marine Biology and Coastal Conservation. Another passion of mine growing up was the natural world, and I would always be watching documentaries by Steve Irwin and David Attenborough. I originally wanted to do a degree in Zoology, but unfortunately, my grades weren’t good enough. Luckily though, I was given the opportunity to do this degree and enjoyed (mostly, the exams were never fun) every minute of it. Unfortunately, when I finished my degree, I wasn’t able to find a job in the field, but I’m still glad I did it.

2) This is a result of fact one. I am a qualified divemaster. While doing my degree, I decided to learn how to scuba dive, mainly because most of the people in my course could, and it was all they talked about. I did my open water course during my first year and loved it so much that over the years, I just kept doing different courses and eventually decided to do the dive master course. The plan was to work as a divemaster in South Africa (I moved back briefly in my early twenties), but by the time I finished the course, it was winter in South Africa, and I couldn’t get a job. I was also running out of money, leading to fact three.

3) I worked on cruise ships for three years. As mentioned before, I was living in South Africa, had no job, and ran out of money. I also really wanted to travel, so I decided to get a job on cruise ships. That way, I got to see more of the world and earned money while doing it. I used to work in the duty-free shops and was lucky enough to work on three great ships, The Independence of the Seas, Queen Elizabeth, and The Azura. Working on cruise ships was not easy, but it was definitely the best experience of my life. Not only did I get to see some amazing places I would never have seen otherwise, but I met some amazing people, including my wife, along the way.

ot really about me, but about Joey Missing-Tooth. As his name suggests, he has a tooth missing, and we have no idea where it is. He likely lost it on a raid, but he refuses to tell us. 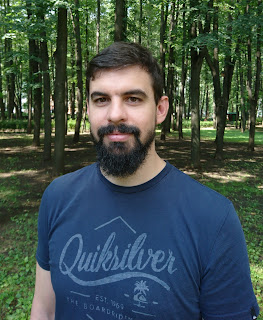 Donovan Cook was born in South Africa but raised in England, and currently works as an English tutor. He is the author of the Ormstunga Saga, which includes his debut novel Son of Anger and the follow up, Raid of the Wolves. His novels come from his fascination with the Viking world and Norse Mythology and he hopes that you will enjoy exploring this world as much as he did writing about it.

When Donovan is not teaching or writing, he can be found reading, watching rugby, or working on DIY projects. Being born in South Africa, he is a massive Springboks fan and rarely misses a match. 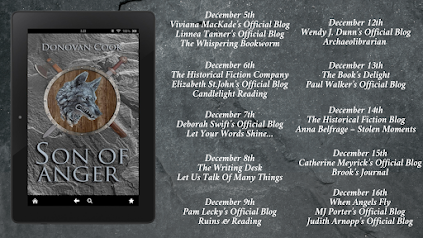