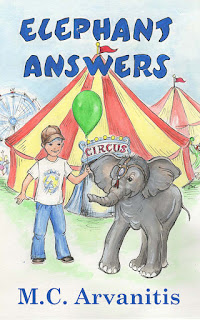 My Review
An adorable picture book for preschool children, and adults, too. Learn the answers to some of the usual questions, such as do elephants have fun while working at the circus?  See if your child can guess the answers to the inquisitive questions before the Little Elephant tells all.  Beautifully illustrated.

Print and eBook editions available at Amazon US and Amazon UK


About the Author
M. C. Arvanitis resides in Fremont, Nebraska. She has a degree in Early Childhood Education, is a graduate of The Institute of Children’s Literature, and taught preschool for many years. Now retired from teaching, she currently manages her blog, Ms. Marge’s Cyber Preschool. Marge has also written numerous mid grade fables, YA stories, and picture books for beginning readers. 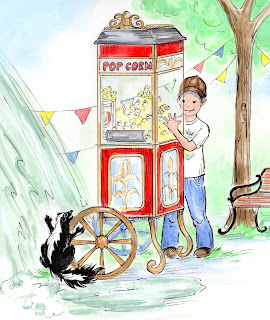 Posted by Mary Ann Bernal at 4:18 PM No comments: 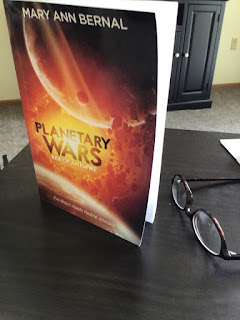 What People Are Saying:

Planetary Wars: Rise of An Empire: I just finish this book. Mary Ann Bernal is one of my favorite authors. Her books are exciting and the endings are surprising! Very well written. I loved it.
Margaret A. ~ Freemont, NE

Planetary Wars: Rise of an Empire: What a page-turner! What I like, that you don't see often in science fiction books, is that the author really fleshed out the characters and made them human-like. I love a small planet standing up to the empire and I'm intrigued by the side story of the internment of the people with the gene mutation. Nothing is all black and white.
Suzanne P. ~ New York City

Planetary Wars: Rise of an Empire: The title and the striking cover image caught my eye and intrigued I read the blurb. That did it for me, I was hooked, being a lover of sci-fi, it was a no-brainer I just had to have this book. And the story was everything I hoped it to be. I felt Anastasia's pain and confusion, innocently falling instantly in love with the man of her dreams. And who could blame her? Jayden, after all, is not only charismatic but handsome with it. But is he really who he says he is? Will Anastasia come to a rude awakening when it is too late? I can definitely recommend this book.
Elisabeth M. ~ U.K.

Planetary Wars Rise of an Empire by Mary Ann Bernal is a suspenseful ride into the unknown. A place none of us have ever been to or would be able to experience in our lifetime. That is what makes this fantasy so irresistible. The story reads true to life but is more exciting and powerfully exhilarating. It is a dark tale of lies and destruction. The drama continues throughout and I got caught up in a web of deceit. There is an old fashion quality to this tale. If you are a Star Trek fan you, I imagine, will appreciate the non-stop misadventures into unchartered territory. The author writes a compelling story that pulled me in right away and made me feel as if the characters were real, though of course, from another planet. Such a nice escape!? The whirlwind romance contributed to Anastasia's inner turmoil. She usually had a good grip on her emotions, but with Jayden, she was no longer disciplined. Every rational thought was discarded while her heart ruled. The romantic exchange makes this more than just a fantasy. So much more. The heart wants what the heart wants. And at all costs, so it seems.
R.B. ~ California

a Rafflecopter giveaway
Posted by Mary Ann Bernal at 1:00 AM No comments:

The Briton and the Dane: Timeline - character interview 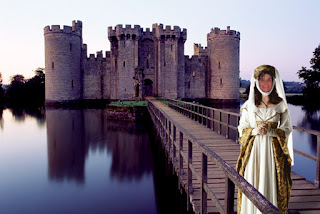 Commentator (C): Thank you for agreeing to this interview, Dr. Franger.
Gwyneth (G): Please call me Gwyneth, and I appreciate this opportunity for my fans to know the “real me”.

C: Let’s start with where do you live?
G: London, but the year is 2066. It is an exciting city, rich in history, but also progressive, blending the old with the new. One challenge, however, is the recruitment of talented men and women to study the past, not only in the classroom but on archeological sites. There is nothing more exciting than discovering ancient artifacts buried in rubble after spending hours, days or even years, removing centuries of dirt and debris.

C: You appear passionate about history. Did you always feel that way?
G: Since I was old enough to hold a shovel. I would spend hours in the park, “excavating” possible sites. It didn’t bother me that I never discovered a relic, I was learning my craft. One day I struck an object; you can imagine my excitement when I unearthed pieces of Roman pottery. Of course, I didn’t learn until much later that my parents were behind my first find.

C: What is your favorite archeological site?
G: Excavating the ruins of the Wareham citadel. Thankfully, the fortress had been reinforced with stone, since the wooden structures suffered the effects of not only time but of natural disasters, such as fire. The Keep, which is the tower, still stands as it once did during the reign of Alfred the Great. The view is breathtaking, and I never tire of summer evenings watching the waves crashing gently upon the rocks below.

C: Has your belief in God helped or hindered your investigations?
G: I definitely believe in Divine Intervention. There is no other way to explain how I was transported, unscathed, back in time to the eleventh century. My life definitely changed from the experience, and without this Divine Intervention, I would not have returned to my timeline, and we wouldn’t be having this conversation.

C: What was it like living in the eleventh century?
G: It was quite a challenge, and I was very concerned about doing something that would change the course of history. I had seen the old Star Trek shows and was very aware of the dangers of interfering. I found having to take a submissive female role disconcerting, but I threw myself into the role of my character. What helped was having studied drama one summer at Stratford-upon-Avon with the Royal Shakespeare Company.

C: Who provided for you during that time?
G: Lord Erik of Wareham, my husband. Again, this is where Divine Intervention comes into play. The night I arrived in Wareham, Erik was waiting for me in the chapel; yes, we were married that evening. He had been expecting me, which I found unnerving. However, he didn’t know at that point that I was from the future. I need to interject that I have had an obsession with him since I stumbled upon a rare painting at a Renaissance Fair. The portrait is still on the wall in my office.

C: Fascinating. When did you take Erik into your confidence? And were other people privy to your true identity?
G: It was disturbing, initially. However, Erik’s belief and trust in God was strong; everything he could not understand was attributed to Divine Intervention. Remember, religion played an important role in everyday life. While Erik accepted I was from the future, he never pressed me for information about how events turned out. There were a select few who were taken into our confidence, but as far as everyone else was concerned, I was Lord Erik’s wife who was not from these parts.

C: Would you change anything if you were able to revisit the eleventh century?
G: The thought is tempting; how different would the world be if William the Conqueror had been defeated at the Battle of Hastings? Oh, my gosh, we could discuss what ifs for hours on end and still be unhappy with the results. I am grateful for having the opportunity to live during a time that people can only read about in history books, and I count my blessings every day that I have been so blessed.

C: Thank you, Gwyneth, for your candor. We look forward to reading about your adventures in The Briton and the Dane: Timeline.