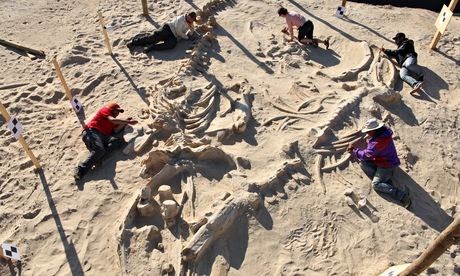 Site is branded most diverse on planet for marine mammals after Pan-American Highway roadworks
The baleen whale fossil graveyard in Chile known as Cerro Ballena, 'whale hill'. Photograph: Adam Metallo, Smithsonian Institution
A mass graveyard of whales has been unearthed beside the Pan-American Highway in Chile, in what scientists believe is one of most extraordinary marine mammal fossil sites on the planet.
The skeletons of dozens of baleen whales were found in ancient sandstones in the Atacama region of northern Chile, where they are thought to have lain undetected for between 6m and 9m years. 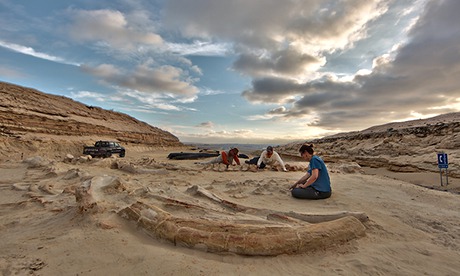 Whale fossil graveyard in Chile. Photograph: Adam Metallo/Smithsonian Institution In an article published in the Royal Society journal, scientists explain that the whales ended up in the same small area as the result of four separate mass strandings over a period of more than 10,000 years.
Researchers believe the animals ingested toxic algae before being washed into an estuary and, eventually, on to flat sands at the site dubbed Cerro Ballena ("whale hill"). 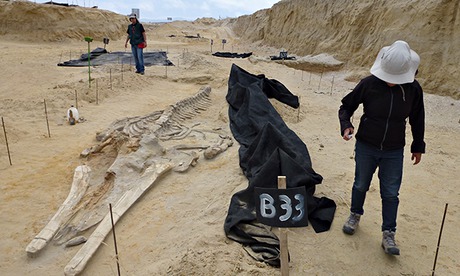 Chilean and Smithsonian paleontologists study several fossil whale skeletons at Cerro Ballena. Photograph: James Parham/California State University, Fullerton Nicholas Pyenson, a palaeontologist at the Smithsonian's National Museum of Natural History, told the BBC: "We found extinct creatures such as walrus whales – dolphins that evolved a walrus-like face. And then there were these bizarre aquatic sloths.
"To me, it's amazing that in 240 metres of road-cut, we managed to sample all the superstars of the fossil marine-mammal world in south America in the Late Miocene. Just an incredibly dense accumulation of species." 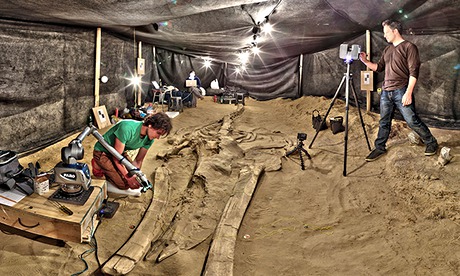 From left, Adam Metallo and Vince Rossi use high-res laser arm scanners to document one of the most complete fossil whales from the Cerro Ballena site. Photograph: Smithsonian Institution Cerro Ballena was famed locally for its hidden ancient skeletons – but the latest discovery was made by chance during construction work on the busy Pan-American Highway that runs alongside the area, which is now seen as one of the richest fossil sites in the world.
Many of the fossils were found in perfect condition, with the skeletons of two adults whales laid on top of the skeleton of a juvenile whale. 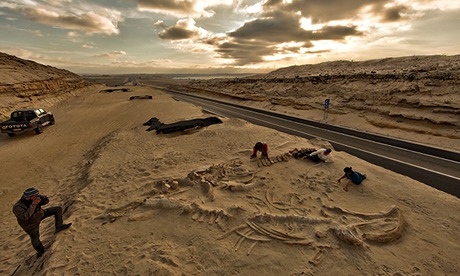 Chilean and Smithsonian paleontologists study fossil whale skeletons at Cerro Ballena. Photo: Adam Metallo/Smithsonian Institution The remains of an extinct species of sperm whale, a walrus-like toothed whale, an aquatic sloth and two seals were also uncovered at the site, but scientists believe there may be hundreds more ancient creatures waiting to be discovered.
Sol Square, a palaeontologist who worked on the discovery, described the find as "a discovery of global importance".
"There has never been a find of this size or this diversity anywhere in the world, which is one of the very special parts of the Atacama region."
http://www.theguardian.com/science/2014/feb/26/baleen-whale-graveyard-fossil-treasure-atacama-chile
Posted by Mary Ann Bernal at 8:48 AM