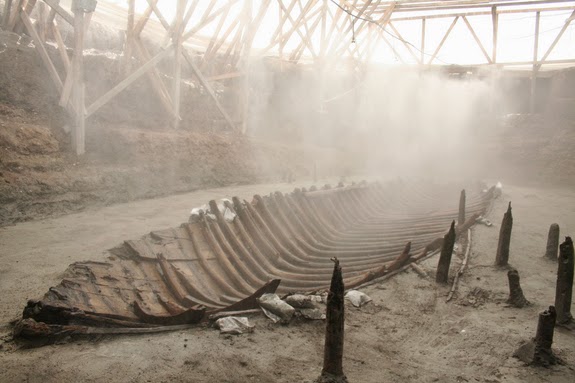 The Yenikapı shipwreck called YK 14 was a 9th-century merchant ship, sen here under sprinklers in April 2007. Waterlogged archaeological wood can be severely damaged if it is allowed to dry and therefore must be kept constantly wet during its excavation (Photo courtesy of the Institute of Nautical Archaeology at Texas A&M University /M. Jones)
by Agata Blaszczak-Boxe
Live Science

Archaeological excavations in Turkey that began in 2004 have yielded a unique historical treasure — 37 shipwrecks from the Byzantine Empire, eight of which are now described in a new report.
The shipwrecks were discovered at a site called Yenikapi, in Istanbul, in what was a port of the ancient city, then called Constantinople. The ships date back to the fifth to 11th centuries, and are in exceptionally good condition, archaeologists say.
"Never before has such a large number and types of well-preserved vessels been found at a single location," said study author Cemal Pulak, of the Institute of Nautical Archaeology at Texas A&M University.

The eight shipwrecks highlighted in the new report, which date from the seventh to 10th centuries, show that the shipbuilders at the time were using a more complex process than previously thought, according to the researchers. [Disasters at Sea: 6 Deadliest Shipwrecks]
Each of the ships the researchers examined in the report incorporated elements characteristic of two ship-building methods. In one method, the shell of a ship was built first, and in the other, the ship's skeleton was constructed first, and then the planks were attached. The researchers' analysis showed that a transition from a shell-first to a skeleton-first approach was already well underway by the seventh century.
"It is through meticulous and time-consuming detective work that we slowly begin to understand how these ships were built, modified, overhauled and used," Pulak told Live Science."By such means, we try understand the minds of the shipbuilders and their design and conceptualization processes, in order to better comprehend the history of science and engineering."
Of the eight ships that the researchers examined for the report, six were classified as "round ships," which means that they were propelled primarily or entirely by sail. The length of the round ships ranged from 26 to 48 feet (8 to 14.7 meters), and they were between 8 and 16 feet (2.5 and 5 m) wide.
The other two ships the researchers examined were galleys — long, oared ships, about 100 feet (30 m) long and 13 feet (4 m) wide. Among all of the 37 shipwrecks discovered at Yenikapi, there were a total of six Byzantine galleys, "notably the first shipwrecks of this type discovered from the Byzantine period," the researchers wrote in their report.
Previously, Byzantine galleys were known only from books and artwork dating to the time period, and such sources tend to be difficult to interpret. Therefore the well-preserved remains of these vessels at Yenikapi play a crucial role in archaeologists' study of Byzantine ships, the researchers said.
Until recently, much of the information about Byzantine ships had come from the several medium-size seagoing ships that had been excavated in the Mediterranean, Pulak said. "Yenikapi has yielded a wide array of small rowboats, fishing boats, utility vessels and even naval ships, all directly from Constantinople itself, the capital of the Byzantine Empire," he added.
A large museum in Istanbul is being planned to exhibit many of the wrecks, Pulak said. But it could take several years to restore the timbers of each ship's hull, he said.
The report was published online Dec. 8 in the International Journal of Nautical Archeology.
Posted by Mary Ann Bernal at 9:05 AM