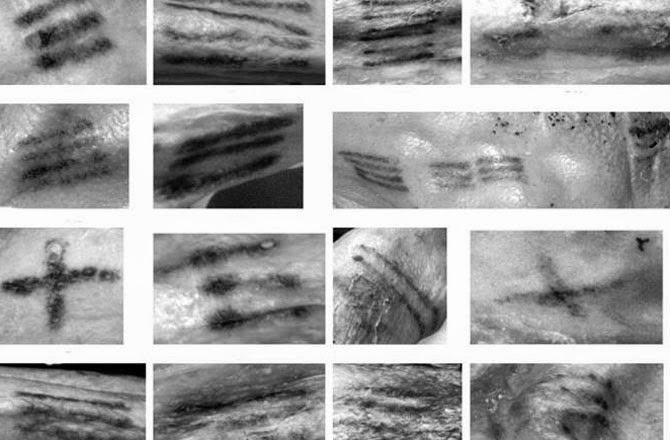 New scans have revealed a total of 61 tattoos on the 5,300-year-old mummified body of Ötzi the Iceman, reigniting the debate on whether the inkings were a form of acupuncture that predates the first recorded use of the practice in China by 2,000 years.
A number of tattoos were noticed on the Iceman ever since his discovery in 1991 in a melting glacier in the Ötztal Alps (hence the name). However, the markings, produced by fine incisions into which charcoal was rubbed, were not easily identifiable because of the dark color of the mummy’s skin.
To accurately determine the exact number and location of the tattoos on the Iceman's body, Marco Samadelli and colleagues from the South Tyrol Museum of Archaeology in Italy used innovative non-invasive multispectral photographic imaging techniques able to capture a range of wavelengths, from IR to UV.
Iceman Mummy 20 Yrs On: Mysteries Remain
The researchers slightly thawed the body in order to eliminate the ice layer wrapping the surface of the Iceman and photographed the body systematically from all directions.
"By covering a range including non-visible and visible light, all possible tattoos could be detected," Samadelli and colleagues wrote in the Journal of Cultural Heritage.
It emerged the mummified body was marked with 61 tattoos divided into 19 groups across various body parts.
"It is an extraordinary result. Finally, we have been able to clarify many doubts on the existence of these tattoos," Samadelli told Discovery News.
The Iceman Suffered Brain Damage Before Death
The majority consisted of linear markings running parallel to each other, between 2 mm (0.07 inches) and 8 mm (0.3 inches) apart. The marks were between 1 mm (0.03 inches) and 3 mm (0.1 inches) thick and between 7 mm (0.2 inches) and 40 mm (1.5 inches) long.
In two locations, on the knee of the right leg and on the ankle of the left foot, the lines formed a perpendicular cross.
The highest concentration of drawings was found in the lower section of the legs, while the longest tattoos were detected around the wrist of the left hand. Visible tattoos, which have been documented before, lay on the back of the lumbar region.
The new imaging technique also allowed the researchers to detect a previously unrecognized group of tattoos.
"It is located in the right lower thoracic region, showing four parallel lines of length varying from 20 mm (0.7 inches) to 25 mm (0.9 inches)," Samadelli and colleagues explained.
"This is of particular interest, as this represents the first tattoo that was detected on the Iceman’s frontal part of the torso," they added.
It was previously believed the tattoos were made as a sort of treatment or diagnosis of health problems, in particular lower back pain and degenerative joint disease of his knees, ankle and wrist. Other studies associated the marking to a primitive form of acupuncture as they were mainly found along acupuncture meridians used to treat back pain.
The Iceman Could Have Used a Dentist
"The newly identified tattoo at the chest of the Iceman seems to contradict the theory, that they were related to lower back pain and degenerative joint diseases, as this mark is not located close to a joint," said the researchers.
However, they noted the Iceman also suffered from conditions that could have also caused pain in the chest area, such as gallbladder stones, worms in his colon, and atherosclerosis.
"Therefore, it cannot be ruled out that the Iceman's tattoos were indeed applied as a therapeutic treatment," they concluded.
Living Relatives of Iceman Mummy Found
Samadelli and colleagues now want to use the complete mapping of the Iceman's tattoos in new research into the possible reasons for their application, including their relation to acupuncture points.
"Future comparative studies based on the known health problems of the Iceman as evidenced by radiological investigations and molecular studies, could help to find out whether the tattoos had a therapeutic, diagnostic or more symbolic background," they wrote.
Posted by Mary Ann Bernal at 9:00 AM