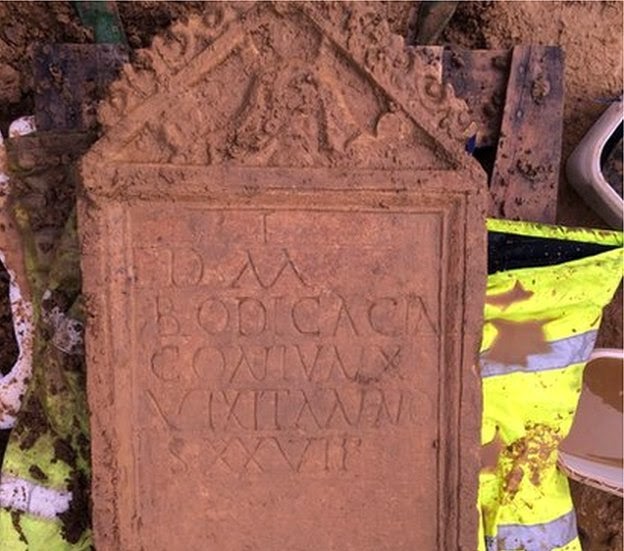 Archaeologists say the quality of the sculpture is very good

A "unique" Roman headstone is the first of its kind unearthed in the UK, experts believe.

The tombstone was found near skeletal remains thought to belong to the person named on its inscription, making the discovery unique.
Archaeologists behind the dig in Cirencester, Gloucestershire, said they believed it marked the grave of a 27-year-old woman called Bodica.
The bodies of three children were also found in the "family burial plot".
Neil Holbrook, of Cotswold Archaeology, translated the Roman inscription on the tombstone, which reads: "To the spirit of the departed Bodica [or Bodicaca], wife, lived for 27 years."
Mr Holbrook said: "The unique aspect is that you can put a name to the person who lies beneath the tombstone."

A rare Roman tombstone marking the grave of a 27-year-old woman has been unearthed in Cirencester
"What's weird is that the inscription only fills half of the panel, so there's a space left below it.
"You can see horizontal marking-out lines, so I guess what they were going to do was come back later when her husband died and add his name to the inscription," Mr Holbrook added.
He added that the skeletal remains, including the skull, were being excavated from beneath the headstone.
'Decorative swirls' Mr Holbrook has suggested the name Bodica was of Celtic origin.

Watch the moment archaeologists lifted a Roman tombstone in Cirencester
"Perhaps Bodica is a local Gloucestershire girl who's married an incoming Roman or Gaul from France and has adopted this very Roman way of death," he said.
He said making the "good quality" headstone must have cost "quite a lot of money" at the time.
The headstone's detailed carved pediment - or triangular top section - was particularly interesting, he said.
"Looking at the pediment, those little 'teeth' which we could see from the back are decorative swirls.
"It looks like a draping of a cloth or sheet, so in many ways the decoration is really fine." 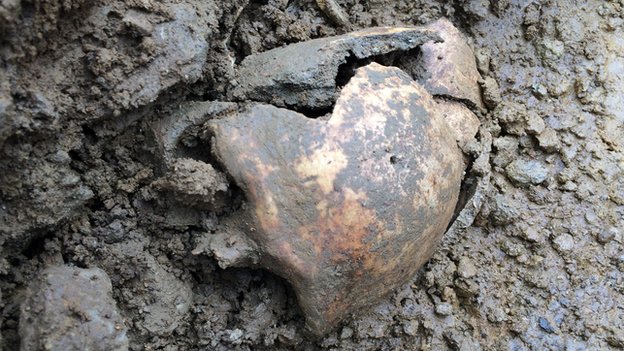 A skull was found near the Roman tombstone which is believed to belong to the 27-year-old woman
About 300 to 400 Roman tombstones have been discovered in the UK, with the tombstone being the tenth found in Cirencester.
The stone, which is made of Cotswold limestone, was partially cleaned up on-site by the team, but will be taken away for further inspection.
Mr Holbrook said it was "amazing" the tombstone had survived.
"When they built the garage in the 1960s they scraped across the top of the stone to put a beam in. 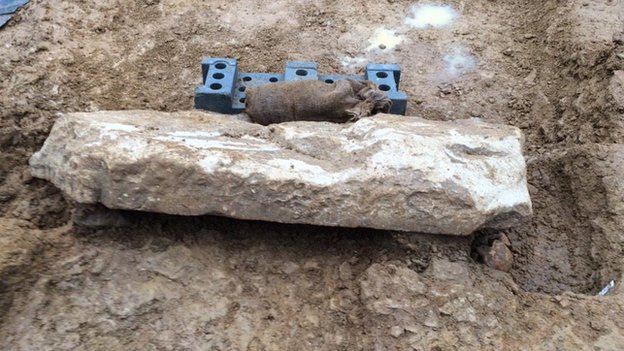 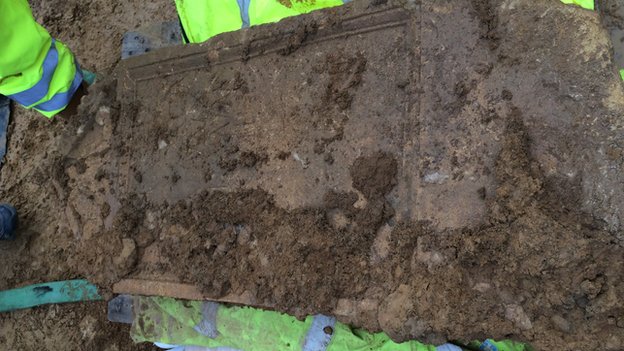 The tombstone was lifted up by archaeologists revealing details of the Roman who was buried there
"If they'd gone a couple of inches lower they'd have smashed it to smithereens."
Roman tombstones were often taken away and smashed up to be re-used in buildings in Cirencester in the Medieval period.
"This stone might have fallen over quite quickly, and was covered over, and that's why it escaped the stone robbers," Mr Holbrook said.
A total of 55 Roman graves have been found during the dig at St James Place.
A further 70 graves were discovered on the same site of the former Bridges Garage on Tetbury Road and a bronze cockerel figurine was found in 2011.
Cirencester, or Corinium as it was known, was the largest town in Roman Britain after London.
Posted by Mary Ann Bernal at 4:32 PM