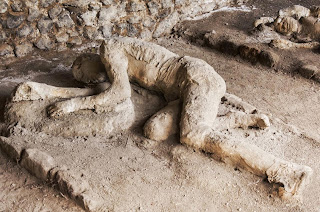 The plaster casts of 86 agonized victims of the Mount Vesuvius eruption in 79 AD will go on exhibit May 26, 2015, in National Archaeological Museum of Naples, Italy.
People of Pompeii, a Roman city, were in their death throes when a cloud of gas from the volcano enveloped them, killing them. The gas was 300 degrees centigrade (572 degrees F). Clearly, from the expressions of their faces and their bodily contortions they were caught by surprise when the ash cloud finally consumed them.
An article on ANSA.com states:


Teeth protrude from lips stretched from pain. Smoldering, encrusted skin, protruding skulls and bones, exposed jaws were all caught in the moment of death, when a glowing, 300C cloud seared surfaces of the bodies in a single stroke, leaving their insides soft, and burying them under ash and stones. Among them is the family of the House of the Golden Bracelet: a woman with a baby on her lap. Near her is a man and another child, perhaps two years old. Harrowing image shows a child sitting on his mother when the ash cloud hit. Credit: Splash News
The actual bodies, which were ossified by the heat, will not go on display but rather the plaster casts that show the exact position the bodies were found in.
Massimo Osanna, the superintendent of archaeology in Pompeii and nearby towns said: "Until now they had never been surveyed, out of a sense of ethics with which these human remains were always treated. No statues of plaster or bronze, but real people who should be treated with respect.” Some of the victims of volcanic gas cloud were clearly in agony (Bigstock photo)
Archaeologist Giuseppe Fiorelli found the bodies in 1863 and came up with a way to detect and extract the bodies intact from their resting places in Pompeii. Scientists also found animals, including a dog and a pig, but they won't be on display in the museum. The animals were restored for purposes of archaeology and science, Osanna said.
A team of scientists, including archaeologists, engineers, an anthropologist, restoration experts and radiologists, is undertaking the Great Pompeii Project to do anthropological and genetic profiling of the unfortunate victims of the eruption. The scientists hope to get a better understanding of their way of life and identify them more fully. They will publish their findings and be featured in a documentary by a restoration company from Salerno.
Pompeii was a flouring Roman city from the 6th century BC until it became frozen in time, preserved by the layers of ash that spewed out from the great eruption of Mount Vesuvius in the 1st century AD. Although Pompeii was initially rediscovered at the end of the 16th  century, it was only properly excavated in the 18th century. Excavators were startled by the sexually explicit frescoes they were unearthing, quite shocking to the sensibilities of medieval citizens of Rome, so they quickly covered them over. Raunchy frescoes uncovered in Pompeii. Source: BigStockPhoto
When excavations resumed nearly two centuries later, archaeologists found the city almost entirely intact – loaves of bread still sat in the oven, bodies of men, women, children, and pets were found frozen in their last moments, the expressions of fear still etched on their faces, and the remains of meals remained discarded on the pavement. The astounding discovery meant that researchers could piece together exactly what life was like for the ancient Romans of Pompeii – the food they ate, the jobs they performed and the houses they lived in The city of Pompeii (Bigstock photo)
Photos of researchers working with the bodies and making plaster casts may be viewed at The Daily Mail.
Featured image: Some of the victims of Pompeii were sitting, some lying when the superhot gas cloud enveloped them. (Bigstock photo)
By Mark Miller