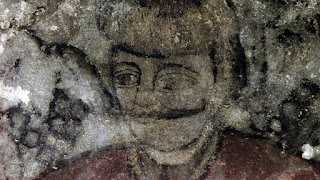 File photo - An old wall drawing depicting a portrait of Vlad the Impaler is seen in a house in Sighisoara, Romania, where his father lived. (Reuters)
Archaeologists still aren't entirely sure where a secret passageway beneath a castle in Turkey leads, but visitors can now explore it for themselves. Not far from where Vlad the Impaler—the inspiration for Dracula—was reportedly held in one of two dungeons inside Tokat Castle, the tunnel stretches for about 100 feet before the path is blocked, reports Hurriyet Daily News.
"We have made progress. Since it has an angle of 45 degrees, it is hard to remove stones and earth," culture and tourism director Abdurrahman Akyuz says of the tunnel, found during restoration efforts in 2009.
"We think that this tunnel was closed in the past to prevent possible danger." Earlier this year, Akyuz told the Daily Sabah that "the history books record that this passage comes down to Pervane Public Bath with a stairway of 360 steps." But for now, "it is a total mystery to where this passage leads." Experts previously said the king's daughters may have used the passage to access the bath, but all that's known for certain is that the tunnel, known as Ceylanyolu or Gazelle Passage, stretches into Tokat's city center, Akyuz says.
It wasn't the only finding that popped up during the restoration, which is ongoing. Food preparation areas, a military shelter, and the two aforementioned dungeons have also been found over the years.
An archaeologist argues Vlad III was held in the dungeons by the Ottomans beginning in 1442, and though that hasn’t been confirmed, officials say a beeswax sculpture of Vlad III will be added to the dungeons, in the hope that it will attract tourists, Hurriyet reports.
"Dracula is a known brand and I think we can begin taking advantage of it," Tokat’s city council president said in announcing the new addition earlier this year.
(Vlad's own castle hit the market last year.)
This article originally appeared on Newser: Secret Tunnel by 'Dracula's Dungeon' Uncovered
Posted by Mary Ann Bernal at 2:16 PM