10 things you (probably) didn’t know about the Romans 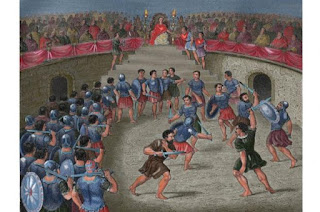 
1) Gladiatorial fighting was not the most popular entertainment

The seating capacity of the main venues formed a ‘rough and ready’ index of the popularity of the different public shows in Rome. The arena for gladiatorial combat, the Colosseum – known in antiquity as the Flavian Amphitheatre – was huge. Modern archaeologists estimate that it could accommodate 50,000 people. One ancient source put the number even higher, at 87,000.
Yet it was dwarfed by the Circus Maximus, where some 250,000 could watch chariot racing. Despite the popularity of pantomime (closer to our ballet than modern panto), theatrical shows came off a poor third. The largest theatre in Rome, that of Marcellus, could hold a mere 20,500.

2) Roman warships were not rowed by slaves

In almost all ‘swords and sandals’ movies and novels, when a galley [a large ship propelled primarily by rowing] appears, we hear the clank of slaves’ chains and the crack of the overseer’s whip. Both are completely anachronistic: the Romans, like the Greeks, had an ideology that we call ‘civic militarism’. It was believed that if you were a citizen you had a duty to fight for your state, and conversely if you fought you were entitled to political rights.
This excluded the use of slave rowers, or slave soldiers like those of medieval Islam. In the handful of exceptional times when slaves were admitted to the armed forces, they were either freed before enlistment, or promised manumission if they performed well in battle.

3) They did not all die young

The average life expectancy – although all such figures are uncertain – was only about 25. However, this did not mean that no one lived into their thirties or on into old age. The average was skewed by the number of women who died giving birth, and by high infant mortality. If a Roman made it to maturity, they were likely to live as long as people in the modern western world.

Like us, the Romans divided the day into 24 hours. But unlike us, their hours varied in length. For the Romans there were always 12 hours of daylight and 12 hours of darkness. Thus, for example, a daylight hour in high summer was considerably longer than one in midwinter.

5) Not all Romans spoke Latin

Stretching from the Atlantic to the Tigris, the Roman empire contained perhaps about 65 million inhabitants. While Latin was the language of the army and of Roman law, many peoples incorporated into the empire continued to speak their native tongue, either as well as, or, especially in the countryside, instead of Latin. Thus variants of Celtic and Syriac, and more obscure languages such as Cappadocian and Thracian, survived.
The Roman elite was bilingual. For them, knowledge of Greek was a badge of status – as such it was similar to French for aristocrats across Europe in the 18th and 19th centuries. So internalised was the Roman usage, when the senators assassinated Julius Caesar, some shouted out not in Latin, but Greek.

The empire produced eminent philosophers such as Seneca and Marcus Aurelius. Yet some Romans were hostile to philosophy for two main reasons: first, it was a Greek invention, and the Greeks were a conquered race – Roman attitudes to the Greeks were very mixed. Second, the study of philosophy, with its hair-splitting definitions and its concentration on the inner man, could be considered to unfit a man for an active life that would serve the state.
The latter view had long been held by some Greeks. Galen, the doctor to the imperial court, remarked that the Romans regarded philosophy as being of no more use than drilling holes in millet seeds.

The great French scholar Paul Veyne said that the Romans were paralysed by sexual inhibitions. While that might be going too far, there were strict limits to socially acceptable behaviour: after the wedding night, for example, a modest Roman wife should not let her husband see her naked again. Consequently, it might be no surprise that those philosophers who argued that a man should not have sex with anyone but his wife, not even with his slaves, won few converts.

Although in art they liked to be depicted in heroic and martial posture, Roman generals were ‘battle managers’, not warriors. Only in the most exceptional circumstances were they expected to fight hand-to-hand. If a battle was lost, the commander should draw his sword and either turn it on himself, or seek an honourable death at the hands of the enemy. Not until Maximinus Thrax (who reigned from AD235 to 238) was an emperor recorded as fighting in the line of battle.

9) Emperors poisoned themselves every day

From the end of the first century AD, Roman emperors had adopted the daily habit of taking a small amount of every known poison in an attempt to gain immunity. The mixture was known as the Mithridatium, after the originator of the practice, Mithridates the Great, king of Pontus (who reigned from c120 to 65BC).
A drinking vessel made from the horn of the one-horned horses or donkeys, believed by the Romans to have lived in India, was thought to be an antidote to fatal poisons.

10) Romans believed they had good reasons to persecute Christians

The Romans believed their empire rested on the Pax Deorum: if the Romans did right by the pagan gods, those deities would do right by them. Christians, on the other hand, either claimed the pagan gods were evil demons, or denied they existed at all. If the Romans allowed such atheists to propagate their beliefs, it was little wonder that the gods were angered and withheld their favour from Rome.
Usually, Roman persecutors gave Christians every chance to acknowledge the traditional gods, and thus avoid martyrdom. Of course, a committed Christian could not offer such false idols even a pinch of incense, or say the necessary ritual words.

Harry Sidebottom is a lecturer in ancient history at Lincoln College, Oxford, and author of the Warrior of Rome and Throne of the Caesars series of novels.