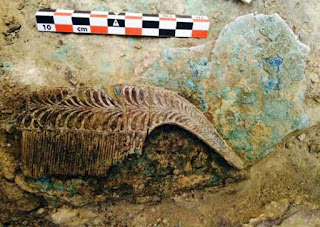 Archaeologists in Greece have made a rare and exciting discovery – an ancient unlooted tomb with the remains of an unknown warrior and a huge hoard of treasure.  The Greek Ministry of Culture announced that it is the most important treasure to have been discovered in 65 years.
The Ministry of Culture announced the finding today, revealing that two US archaeologists, Jack L. Davis and Sharon R. Stocker from the University of Cincinnati, made the discovery while excavating the 3,500-year-old Palace of Nestor on Greece’s Peloponnese peninsula.
The Palace of Nestor, located at the top of the hill of Epano Englianos, near Pylos, is the best preserved Mycenaean Greek palace discovered. It once consisted of a two-storey building with reception rooms, baths, workshops, store rooms, and an established sewage system.

Photo of Nestor’s Palace taken in 2010 (public domain).
The tomb, which measures 2.4 meters in length and 1.5 meters in width, was discovered on the site of the palace complex. However, it had been placed there many years before the palace was built. Surprisingly, the tomb had not been looted in antiquity, unlike most of the other Mycenaean-era tombs found to date.
Inside the tomb, archaeologists discovered the remains of a wooden coffin containing the skeleton of an unknown warrior, aged between 30 and 35 years old.  Next to him were his weapons – a bronze sword with a gold and ivory handle and a gold-hilted dagger. Considering his place of burial and the treasures he was buried with, he is believed to have been a person of great importance.
According to the Ministry of Culture, the treasures also included gold rings, an ornate string of pearls, 50 Minoan seal stones carved with imagery of goddesses, silver vases, gold cups, a bronze mirror, ivory combs, an ivory plaque carved with a griffin, and Minoan-style gold jewelry decorated with figures of deities, animals, and floral motifs. Bronze mirror with an ivory handle found in the grave of the warrior. Department of Classics / University of Cincinnati.
Many of the artifacts found in the tomb have been traced to Crete, the island upon which the Minoan civilization arose. James C. Wright, the director of the American School of Classical Studies at Athens, told the New York Times that the finding of the tomb “will help scholars understand how the state cultures that developed in Crete were adopted into what became the Mycenaean palace culture on the mainland.” Artifacts recovered from the grave of the ancient warrior. Greek Ministry of Culture.
Archaeologists now plan to carry out a DNA analysis on the warrior’s remains to try to determine his origin.  They also plan to carry out radiocarbon tests on the plant material recovered from the tomb, which may allow more accurate dating of the burial.
Featured image: An ivory comb found in the 3,500 years old warrior tomb unearthed in the Peloponnese region of Greece. Greek Ministry of Culture.
By April Holloway