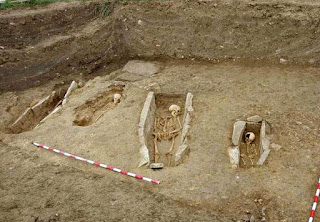 The medieval village of Arganzón has been brought to light in the area of Condado de Treviño, Burgos, Spain. Through a series of excavations, tombs, houses, and silos from the Middle Ages, as well as a convent from the early seventeenth century, have been uncovered.
A team of archaeologists belonging to the research group Heritage and Cultural Landscapes, of the Universidad del País Vasco discovered the medieval village and Franciscan convent in the Zadorra river valley near the current town of La Puebla de Arganzón. However, NCYT Amazings reports that the formation of medieval villages and towns followed a very different process in the valley of the Zadorra than in other nearby areas.

The medieval village found in the excavations contains a large number of buildings, with one key feature being a large rectangular tower. This tower has walls about two meters (6.6 feet) wide and a height of about three meters (9.8 feet). A residential building made of sillarejo (carved stone blocks) has also been discovered at the site, according to reports from the Municipality’s official website. View of the modern Puebla de Arganzón, located near the medieval village of Arganzón (CC BY-SA 3.0)
In addition, the excavations have pinpointed a large cemetery with anthropomorphic tombs, graves enclosed by stone slabs, and burials carried out directly on the rock, dated before the year 1000 AD. “Anthropological studies have shown that the cemetery contains both children and adults, young and old,  men and women - in short, the entire Arganzón community were buried here,” Juan Antonio Quirós Castillo, director of the project, said.
It has also been possible to identify some houses close to the cemetery, which were in use during the Middle Ages. These structures appear to have been built on stone and enclosed with ephemeral (short-lived) materials. Other interesting findings at the site include several silos that were used for grain storage. Excavations have shown several silos for the storage of grain. (UPV-EHU / Courier)
Apart from these finds, archaeologists have discovered that in 1615 the Franciscan convent of Our Lady of Conception was founded on the old Church of Santa Maria. Excavations have recovered a partial plan of the monastery, which includes the convent church, a large cloister, a garden, and other outer buildings. Inside the church they have uncovered numerous burials. One of the especially interesting graves contains a skeleton with a bone rosary around the neck.  Several ceramic vessels, such as food dishes, have also been recovered at the monastery.
The monastery, which was in use until 1834, was rebuilt and restored several times, as shown by the different types of floors and walls. Nonetheless, the Battle of Vitoria and the Carlist Wars severely damaged the monastery and this destruction eventually led to its abandonment.

Arganzón, located on the outskirts of the ancient Roman city of Iruña, was founded around the sixth century. The first written references about this medieval village are from the year 801, when the Batalla de las Conchas de Arganzón took place around the village. In this battle a Christian contingent ambushed Arab forces during one of the raids of Alava and Castile.
Later, in the year 871, a document mentions the church of Santa María de Arganzón, referring to how Mr. Arroncio donated various assets received in his inheritance to the monastery. As Arroncio came from the León family of the Northwest, some scholars have assumed that Arganzón was repopulated by people from that area.
Despite this connection, the newspaper El Correo points out that the researchers have come to other conclusions, and that the villages and medieval towns of the valley of the Zadorra followed a very different process from other towns of that time. “In other words, Arganzón was not formed as a result of repopulation carried out by settlers from other parts of northern Spain in the ninth century, but was the result of a local initiative.” According to Juan Antonio Quirós.
The Arganzón castle was built around the time of the village’s foundation in 1000 and is still partially preserved. The village, of great importance throughout the centuries, continued to be inhabited even after the foundation, in the late twelfth century, of the neighboring Puebla de Arganzón. Finally, the older Arganzón was permanently abandoned in the late Middle Ages, although the church was still maintained in later centuries. Tower of the Arganzón castle, built circa 1000. (UPV / EHU-Agencia Sinc)
Featured image: Some of the graves enclosed by stone slabs found in the medieval cemetery of Arganzón. (UPV-EHU / NCYT Amazings)
By: Mariló TA
This article was first published in Spanish at https://www.ancient-origins.es/ and has been translated with permission.