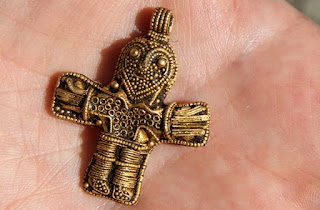 The small gold object, made in the shape of a man with outstretched arms — the image of Christ on the cross — is estimated to be Denmark’s oldest crucifix.
Dating from the first half of the 900s (10th century), the pendant has shed new light on Christianity in Denmark, according to experts at the Viking Museum at Ladby, where the crucifix is now kept.
Viking ‘Hammer of Thor’ Unearthed

“It’s older than Harald Bluetooth’s runic stone in Jelling,” the museum said in a statement.
The stones in the town of Jelling feature a figure on the cross and commemorate Harald Bluetooth’s conversion of the Danes to Christianity.
Until now, the massive runestones, estimated to date from 965 A.D., were believed to be the earliest depiction of Jesus on a cross in Denmark.

Representing the best-known religious symbol of Christianity, the newly found crucifix would show that Danes embraced Christian faith earlier than previously thought.
The precious object was found by amateur metal detectorist Dennis Fabricius Holm in the fields around a church in the village of Aunslev, on the Danish island Funen.
“It’s pure luck that the little jewelry has survived the last 1,100 years in the earth,” the museum said.
‘For Allah’ Inscription Found on Viking Era Ring
The figure measures 1.6 inches in height and weighs 0.45 ounces. While the back surface is smooth, the front is made of finely articulated goldthreads and tiny fillagree pellets. At the top a small eye for a chain is mounted.
“The cross looks a lot like the gilded silver cross found in 1879 in Birka near Stockholm in Sweden, in a female grave from the Viking Age,” the museum said.
Silver fragments of similar crosses were found in female graves dating to the first half of the 10th century, but the Aunslev cross is the first Danish specimen in full figure.
“It was probably worn by a Viking woman, but it cannot yet be decided, whether the cross was to show that she was a Christian Viking or was just a part of a pagan Viking’s bling-bling,” the museum said.
400-Year-Old Crucifix Found by Canadian Student
According to Swedish archaeologist Martin Rundkvist, who first announced the findings on his blog, the crucifixes are too similar for more than one or two people to have been making them.
“The first crucifix was found at Birka near Stockholm. But the second, third and fourth one have been found near Hedeby in Denmark. That is probably were they were made,” Rundkvist told Discovery News.
“Birka, Hedeby and a group of other towns in northern Europe shared an itinerant population of traders and craftspeople,” he said.
The Aunslev cross will be on exhibit at the Viking Museum in Ladby until the Easter holiday, then it will sent to a lab for preservation.
In the summer it will be part of an exhibition in the museum that will show some recent Viking Age finds made in eastern Funen with metal detectors.
by Rossella Lorenzi