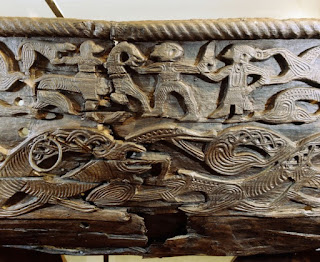 A detail of the decorative carving on the side of the Oseberg cart depicting a woman with streaming hair apparently restraining a man's sword-arm as he strikes at a horseman accompanied by a dog. Below is a frieze of intertwined serpentine beasts. c850 AD. Viking Ship Museum, Bygdoy. (Werner Forman Archive/Bridgeman Images)


In the long history of Scandinavia, the period that saw the greatest transformation was the Viking Age (AD 750–1100). This great movement of peoples from Denmark, Norway and Sweden, heading both east and west, and the social, religious, political and cultural changes that resulted from it, affected the lives and roles of women as well as the male warriors and traders whom we more usually associate with ‘Viking’ activities.
Scandinavian society was hierarchical, with slaves at the bottom, a large class of the free in the middle, and a top level of wealthy local and regional leaders, some of whom eventually sowed the seeds of the medieval Scandinavian monarchies. The slaves and the free lived a predominantly rural and agricultural life, while the upper levels of the hierarchy derived their wealth from the control and export of natural resources. The desire to increase such wealth was a major motivating factor of the Viking Age expansion.
One way to acquire wealth was to raid the richer countries to the south and west. The Scandinavians burst on the scene in the eighth century as feared warriors attacking parts of the British Isles and the European continent. Such raiding parties were mainly composed of men, but there is contemporary evidence from the Anglo-Saxon Chronicle that some warbands were accompanied by women and, inevitably, children, particularly if they had been away from Scandinavia for some time. The sources do not reveal whether these women had come from Scandinavia with the men or joined them along the way, but both are likely.
Despite popular misconceptions, however, there is no convincing evidence that women participated directly in fighting and raiding – indeed, the Chronicle describes women and children being put in a place of safety. The Viking mind, a product of a militarised culture, could certainly imagine women warriors, as evidenced by their art and mythology, but this was not an option for real women.

In parts of Britain and Ireland and on the north-western coasts of the European continent, these raids were succeeded by settlement, as recorded in contemporary documents and shown by language, place-names and archaeology. An interesting question is whether these warriors-turned-settlers established families with Scandinavian wives or whether they integrated more quickly by taking local partners. There is strong evidence in many parts of Britain for whole communities speaking Scandinavian as the everyday language of the home, implying the presence of Scandinavian-speaking women.
Metal-detectorist finds show that Scandinavian-style jewellery was imported into England in considerable numbers on the clothing of the female settlers themselves. In the north and west of Scotland, Scandinavian speech and culture persisted well into the Middle Ages, and genetic evidence suggests that Scandinavian families and communities emigrated to places such as Orkney and Shetland en masse.
Not all of these settlers stayed in the British Isles, however. From both the Norwegian homeland and the British Isles, ambitious emigrants relocated to the previously uninhabited Faroe Islands and Iceland and, somewhat later, to Greenland and even North America. The Icelandic Book of Settlements, written in the 13th century, catalogues more than 400 Viking-Age settlers of Iceland. Thirteen of these were women, remembered as leading their households to a new life in a new land. One of them was Aud (also known as Unn), the deep-minded who, having lost her father, husband and son in the British Isles, took it on herself to have a ship built and move the rest of her household to Iceland, where the Book of the Icelanders lists her as one of the four most prominent Norwegian founders of Iceland. As a widow, Aud had complete control of the resources of her household and was wealthy enough to give both land and freedom to her slaves once they arrived in Iceland.

Other women were, however, taken to Iceland as slaves. Studies of the genetic make-up of the modern Icelandic population have been taken to suggest that up to two-thirds of its female founding population had their origins in the British Isles, while only one third came from Norway (the situation is, however, the reverse for the male founding population).
The Norwegian women were the wives of leading Norwegian chieftains who established large estates in Iceland, while the British women may have been taken there as slaves to work on these estates.  But the situation was complex and it is likely that some of the British women were wives legally married to Scandinavian men who had spent a generation or two in Scotland or Ireland before moving on to Iceland. The written sources also show that some of the British slaves taken to Iceland were male, as in the case of Aud, discussed above.
These pioneer women, both chieftains’ wives and slaves, endured the hardships of travel across the North Atlantic in an open boat along with their children and all their worldly goods, including their cows, sheep, horses and other animals. Women of all classes were essential to the setting up of new households in unknown and uninhabited territories, not only in Iceland but also in Greenland, where the Norse settlement lasted for around 500 years.
Both the Icelandic sagas and archaeology show that women participated in the voyages from Greenland to some parts of North America (known to them as Vinland). An Icelandic woman named Gudrid Thorbjarnardottir is particularly remembered for having been to Vinland (where she gave birth to a son), but also for having in later life gone on pilgrimage to Rome and become a nun.

A page from the 'Anglo-Saxon Chronicle' in Anglo-Saxon or Old English, telling of King Aethelred I of Wessex and his brother, the future King Alfred the Great, and their battles with the Viking invaders at Reading and Ashdown in AD 871 (c1950). (Photo by Hulton Archive/Getty Images)

Mistress of the house

These new settlements in the west were, like those of the homelands, rural and agricultural, and the roles of women were the traditional ones of running the household. Although free women did not by convention participate in public life, it is clear that the mistress of the household had absolute authority in the most important matters of daily life within its four walls, and also in many aspects of farm work.
Runic inscriptions show that women were highly valued for this. On a commemorative stone from Hassmyra, in Sweden, the deceased Odindisa is praised in runic verse by her husband for her role as mistress of that farm. The rune stones of the Isle of Man include a particularly high proportion commemorating women.
Those women who remained in Scandinavia also felt the effects of the Viking Age. The evidence of burials shows that women, at least those of the wealthier classes, were valued and respected. Much precious metalwork from the British Isles found its way into the graves of Norwegian women, usually presumed to be gifts from men who went west, but some were surely acquired abroad by the women themselves.
At the top level of society, women’s graves were as rich as those of men – the grave goods of a wealthy woman buried with her servant at Oseberg in Norway included a large and beautiful ship, several horses and many other valuable objects. Such a woman clearly had power and influence to be remembered in this way. With the establishment of the monarchies of Denmark, Norway and Sweden towards the end of the Viking Age, it is clear that queens could have significant influence, such as Astrid, the widow of St Olaf, who ensured the succession of her stepson Magnus to the Norwegian throne in the year 1035.

Another of the major changes affecting Viking Age Scandinavia was that of urbanisation. While trade had long been an important aspect of Scandinavian wealth creation, the development of emporia – town-like centres – such as Hedeby in Denmark, Kaupang in Norway, Birka in Sweden, or trading centres at York and Dublin, provided a new way of life for many.
The town-like centres plugged into wide-ranging international networks stretching both east and west. Towns brought many new opportunities for women as well as men in both craft and trade. The fairly standard layouts of the buildings in these towns show that the wealth-creating activities practised there were family affairs, involving the whole household, just as farming was in rural areas. In Russia, finds of scales and balances in Scandinavian female graves indicate that women took part in trading activities there.
Along with urbanisation, another major change was the adoption of Christianity. The rune stones of Scandinavia date largely from the period of Christianisation and show that women adopted the new religion with enthusiasm. As family memorials, the inscriptions are still dominated by men, but with Christianity, more and more of them were dedicated to women. Those associated with women were also more likely to be overtly Christian, such as a stone in memory of a certain Ingirun who went from central Sweden on pilgrimage to Jerusalem.
The Viking Age, then, was not just a masculine affair. Women played a full part in the voyages of raiding, trading and settlement, and the new settlements in the North Atlantic would not have survived very long had it not been for their contribution. This mobile and expansive age provided women with new opportunities, and sagas, rune stones and archaeology show that many of them were honoured and remembered accordingly.
Judith Jesch is professor of Viking studies at the University of Nottingham. Her publications include The Viking Diaspora (Routledge, 2015). You can follow her on Twitter @JudithJesch
Posted by Mary Ann Bernal at 5:00 AM