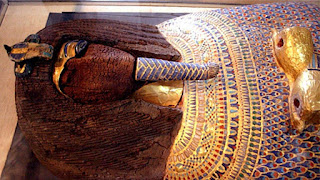 An ancient Eygptian tomb excavated in 1907 still holds mysteries. Chief among them: Who exactly was buried there? Was it Akhenaten, a radical pharaoh who overturned all the Egyptians knew about their many deities and elevated one “true” god above all others—Aten? A new study will explore this question and try to answer once and for all who was the occupant of the mystery sarcophagus in tomb KV55 of the Valley of Kings.

No one has ever presented any definitive evidence that the sarcophagus had contained Akhenaten’s remains, AhramOnline quotes Elham Salah, head of the Antiquities Ministry’s Museums Department, as saying. Dr. Salah added that the sarcophagus is one of the most controversial among Egypt’s many known ancient burials. Bust of Pharaoh Akhenaton (Wikimedia Commons)
The Ministry of Antiquities will continue a study of the sarcophagus begun in 2015 with help of a $28,500 grant from the American Research Center in Egypt.
“Salah … told Ahram Online that the study is being carried out on a collection of 500 gold sheets found in a box in storage at the Egyptian Museum in Tahrir along with the remains of a skull and a handwritten note in French,” the newspaper states. The gold sheets that were in a sarcophagus in the tomb (Photo by AhramOnline)
Islam Ezat, a staffer with the ministry’s scientific office, said the study is being done by skilled Egyptian archaeologists and restorers. He told AhramOnline the study may answer once and for all who the owner of the sarcophagus and tomb was.
KV55 contained a variety of artifacts and a single body, as Ancient Origins reported in January 2015. Identification of the body has been complicated by the fact that the artifacts appear to belong to several different individuals. It has been speculated that the tomb was created in a hurry, and that the individual buried there had been previously laid to rest elsewhere. With many different possibilities for the identity of the mummy – ranging from Queen Tiye (Akhenaten’s mother), to King Smenkhkare – researchers who set out to identify the mummy were presented with a puzzling challenge.
In January 1907, financier Theodore M. Davis hired archaeologist Edward R. Ayrton and his team to conduct excavations in the Valley of the Kings in Egypt. The Valley of the Kings is an area in Egypt located on the West bank of the Nile River, across from the city of Thebes. Almost all of the pharaohs from Egypt’s Golden Age are buried in this famous valley.
The KV55 tomb is small and simple. The entrance includes a flight of 20 stairs. At the time of the discovery, the entrance and stairs were covered by rubble. A sloping corridor leads to the tomb, which contains a single chamber and a small niche. Within the tomb, at the time of discovery, were four canopic jars, a gilded wooden shrine, remains of boxes, seal impressions and a vase stand. It also had pieces of furniture, a silver goose head, two clay bricks, and a single coffin. The coffin had been desecrated, with parts of the beautifully decorated face having been removed.

One of the four Egyptian alabaster canopic jars found in KV55, depicting what is thought to be the likeness of Queen Kiya. Wikimedia, CC BY-SA 2.5
Overall, the physical appearance of the tomb is unremarkable. However, the contents became more puzzling and mysterious as they were examined, as each piece appeared to be connected to different individuals. This made efforts to identify the remains within the tomb more difficult. According to some researchers, the presence of this variety of items indicates that whoever was entombed here was done so in a hurry, or possibly the individual was buried somewhere else, and then relocated to KV55 at a later date.
While identifying the remains in the tomb has been challenging, there are many clues in the items found within the tomb. Many of these items have been linked to King Akhenaten. The four canopic jars within the tomb were all empty. They contained effigies of four women, believed to be the daughters of Akhenaten, and may have been created for Kiya, one of Akhenaten’s wives. The gilded shrine appeared to have been created for Akhenaten’s mother, Queen Tiye. And Akhenaten’s name was on the two clay bricks. Profile view of a skull recovered from KV55. Public Domain
In 2010, some experts had concluded they were nearly certain the remains were of Akhenaten, but the identity is now being studied further.
Featured image: The desecrated royal coffin found in Tomb KV55. Wikimedia, CC BY 2.0
By Mark Miller
Posted by Mary Ann Bernal at 5:00 AM