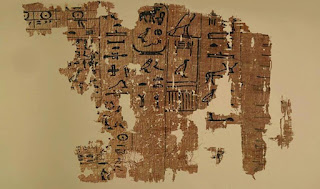 Some of the details of the construction of the Egyptian Great Pyramid are revealed to the public for the first time when they go on display at the Egyptian Museum in Cairo. The information comes in the form of a papyri logbook written by an inspector named Merer. While much about the building of the pyramids remains unknown and speculative, the precious text sheds at least some light on the later aspects of the building process.

According to Live Science, Merer wrote in hieroglyphics how he was in charge of about 200 men and gave some information about the construction process while he was working on it in the 27th year of Khufu's reign. Statue of Khufu in the Cairo Museum. (Public Domain)
Writing on the document in 2014 (it was unearthed in 2013), the archaeologists Pierre Tallet and Gregory Marouard said that the pyramid was nearing completion when the text was written. Merer wrote that the work at that time was focused on creating the limestone casing to cover the pyramid.
The archaeologists’ research on the logbook was published as an article in the journal Near Eastern Archaeology. They explained in their article that the document is comprised of more than 300 fragments of varying sizes and provides details on the inspector’s daily activities over several months. Concentration of papyri in the rubble on which the logbook was written. (P. Tallet)
The logbook was discovered at the Red Sea harbor of Wadi al-Jarf and Live Science reports that “It dates back about 4,500 years, making it the oldest papyrus document ever discovered in Egypt.”
Apart from the information on daily activities, Merer’s log (and others found at the site) also provide additional interesting tidbits of data. The archaeologists wrote in their articles that:

“Merer's journal also mentions his passage at an important logistic and administrative center, ‘Ro-She Khufu’ - which seems to have functioned as a stopping point near by the Giza plateau. It is especially specified that this site is under the authority of a high rank official, Ankhhaef, half-brother of Khufu, who was his vizier and “chief for all the works of the king” at the end of the reign. Other logs found in the same archive also give information about others missions accomplished by the same team of sailors during the same year, notably the building of a Harbor on the Mediterranean Sea coast.” Bust of Prince Ankhhaef, Khufu’s half-brother and vizier. ( Keith Schengili-Roberts/CC BY SA 2.5 )
Live Science reports that it is uncertain how long the logbook will be on display at the Egyptian Museum.
The Great Pyramid, also known as the Pyramid of Cheops and Pyramid of Khufu, is comprised of more than 2 million limestone blocks weighing from 2 to 70 tons. Thus, it is interesting to note that Merer’s logbook explains from where this material was quarried and how it was transported towards the pyramid’s site. Tallet and Marouard’s article says that the logbook:


“records a period over the course of several months – in the form of a timetable with two columns per day – with many operations related to the construction of the Great Pyramid of Khufu at Giza and the work at the limestone quarries on the opposite bank of the Nile. On a regular basis, there are also descriptions concerning the transportation, on the Nile and connected canals, of stone blocks, which had been extracted from the northern and southern quarries of Tura. These blocks were delivered within two or three days at the pyramid construction site, called the ‘Horizon of Khufu’.”

Some researchers say that the ’Horizon of Khufu’ refers to the pharaoh Khufu’s name for his necropolis. Left: Part of a papyrus inscribed with an account dating to the reign of Khufu (13th cattle count). ( G. Pollin )  Right: Account on a papyrus (A) and a detail of one page of inspector Merer's “diary” (B), mentioning the “Horizon of Khufu.” ( G. Pollin )
The Great Pyramid is the only Giza pyramid that has air shafts . This pyramid was built with such precision that it has been said that it would be difficult to replicate it even with today’s technology. This point is one of the reasons why so many people are fascinated by the pyramid’s construction.

Within the Great Pyramid, there are areas that are called the King's Chamber, the Queen's Chamber, and the Subterranean Chamber. It should be noted however that there is much debate over these names and the purpose of the pyramid itself. Mainstream archaeology accepts that the pyramid was built around 2500 BC and commissioned by King Khufu for his tomb. However, much controversy surrounds these conclusions. For example, German archaeologists in 2013, argued that the Great Pyramid is much older and served a different purpose .
The debate over the pyramid’s construction and use continues to enthrall many researchers and, although work continues at the site, many of the questions behind this fascinating ancient structure remain unanswered.