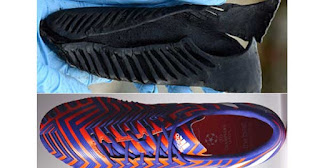 A team of archeologists has discovered more than 400 ancient Roman shoes in the Vindolanda fort in Northumberland, England, including some that resemble modern-day shoe styles. The site, located just south of Hadrian's Wall, was an ancient settlement for Roman soldiers and their families.

During the excavation work, which lasted the whole summer, the researchers were uncovering one shoe after another. It was a huge challenge, but every single piece is priceless. According to the researchers, every single shoe is like a time machine, and a window into the everyday life of the person who once wore it.

The ancient site of Vindolanda is located just south of Hadrian’s Wall (pictured), which it predates. Source: BigStockPhoto
Some of the shoes even resemble today’s fashions. For example, Chronicle Live reports that one shoe that was unearthed is strikingly similar to the Adidas Predator football boot. Although Romans didn't play football, the shoes offered them similar comfort and flexibility to the famous Predator model.
The shoes belonged to the different generations, ranging from tiny baby boots to small children's shoes, adult female and men boots and bath clogs. The owners of the shoes lived inside the fort at Vindolanda. It was built c. 1,800 years ago by the Roman army. It was small but one of the most heavily defended forts in Britain. 
"This offers an unbelievable and unparalleled demographic census of a community in conflict from two millennia away from today. The volume of footwear is fantastic as is its sheer diversity even for a site like Vindolanda which has produced more Roman shoes than any other place from the Roman Empire.” [via ITV.com].

Vindolanda was a small garrison, where only a few hundred soldiers were stationed with their families. They took shelter inside the fort behind a series of a large ditches and ramparts. The war between the Roman forces and British tribes was long and cruel. Romans arrived in Britain for the first time around 55 or 54 BC, when Julius Caesar launched an invasion. The war between the invaders and British tribes ceased around 212 AD, and the fort went out of use. Vindolanda was abandoned and anything that people didn't want or couldn't take with them to the new settlements was left behind and remained there for nearly two millennia.  New constructions built on top of the old created an oxygen free environment that preserved many of the precious artifacts. Roman shoes found at Vindolanda. Credit: Vindolanda Trust
The research is led by the Vindolanda Trust, which is committed to the preservation and public display of its finds. According to the Trust, each shoe costs between £80 and £100 to conserve, so the researchers have launched a fundraising campaign asking for support from the public to ‘conserve a shoe’.
Top image: Top: An ancient shoe recently discovered in a Roman fort. Credit: North News & Pictures LTD. Below: Adidas Predator.
By Natalia Klimzcak
Posted by Mary Ann Bernal at 5:00 AM