A handbook to shopping in ancient Rome 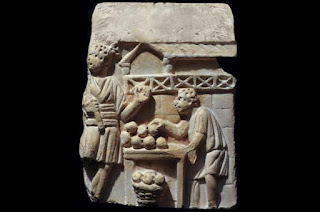 A fruit seller displays his wares on a wooden table, in this bas-relief from the second century AD. (Bridgeman Art Library)

Ancient Rome was a cosmopolitan city, drawing in people and products from across the Mediterranean world and beyond. By the late first century BC, there were as many as one million inhabitants in Rome, an urban population figure not reached again in the western world until London in around 1800.
Like most urban residents, the people of Rome relied on retailers to provide them with food, clothing and other goods. Our ancient evidence points to a thriving retail trade in the city and, for any ancient visitor, the sheer number of retailers and shoppers must have been one of the most striking aspects of the Roman cityscape.
Retailers were found in the busiest areas of the city. Small shops and workshops lined the main thoroughfares, spilling out over their thresholds into the streets and colonnades. The poet Martial remarked that until the emperor Domitian issued an edict banning this practice, Rome looked like one big shop.
Market traders, street sellers and ambulant hawkers also tended to be found in central areas. They clustered around temples, bathhouses, forums, circuses, amphitheatres and theatres, attracted by the commercial opportunities offered by large gatherings of people. Sellers at temples offered votive offerings such as flower garlands, while those at the amphitheatre may have sold gladiatorial programmes of the type mentioned by Cicero in the mid-first century BC. Perishable items that could be eaten straight away were also a common sight on Rome’s streets. Prepared foods such as bread, hot sausages, pastries, and chickpeas were perfect for a busy Roman on the run.
Reliefs and paintings, drawn mainly from Pompeii and from Rome’s port city of Ostia, are our best evidence for the appearance of Roman stalls. Temporary stalls are visible in a painting (shown right) from Pompeii of a riot in its amphitheatre – a depiction of a historical event that the historian Tacitus tells us took place in AD 59, when the residents of the nearby city of Nuceria descended on the doomed town. In the foreground of the picture, we can see stalls set up under awnings strung between trees or on stakes in the ground. Painted messages on the outside of the amphitheatre also record the location of stalls.
Another Pompeian painting shows a tableau of everyday events in the forum. Scattered within scenes showing legal judgements, the corporal punishment of school pupils, and people chatting and reading public notices, we can make out traders hawking their wares.
Some have their goods lying on the floor around them – such as a man selling metal vessels, or a hot-food trader standing by a large cauldron suspended over a fire.

A painting showing a riot in Pompeii’s amphitheatre in AD 59. The stalls of traders who operated around the building are visible in the foreground. (Bridgeman Art Library)

Others have more elaborate sales areas. A shoe seller sets out wooden benches for his customers and marks out his place of sale with curtains hung between columns. Bread and vegetable vendors display their wares on wooden tables and in baskets on the ground.
A marble relief from Ostia shows a vegetable seller with a large basket and a stall made up of a wooden trestle table, while another relief (shown on page 30) depicts a woman stood behind cages containing her stock of chickens and hares. On the counter are two bowls of fruit, probably containing figs, and a barrel containing snails. There are even two monkeys on the stall to attract and entertain customers. Other sellers were more mobile, carrying their wares on trays or in baskets around their necks, as shown in a funerary relief from Narbonne. Some pictures show retailers holding one hand aloft as though addressing a crowd, while the other hand touches their produce, inviting customers to do the same.
Not only were Roman retailers highly visible, they were also very audible, disturbing the residents of the city with their distinctive sales cries. Seneca, for example, complains about the hawkers who frequent the bathhouse below his apartment in first-century Rome, describing the noise of the “pastry-cooks with their varied cries, the sausage dealer and the confectioner and all the vendors of food from the cookshops selling their wares”.
Other writers liken the poor poetry or speeches of their competitors or enemies to the shouts of retailers, the proverbial ‘fishwives’ of their day. Martial likens the wit of a friend to that of a “vendor of boiled chickpeas”, or the slaves of the fishmongers, or the “bawling cook who hawks smoking sausages round stuffy bistros”.
Our ancient literary sources are written by upper-class Romans who almost universally condemn retail as a deceitful practice and repeatedly call the quality of goods into question. Galen is particularly scathing, claiming that some unscrupulous retailers had been known to use human flesh in dishes in place of pork. He observes that human and pig flesh must taste and smell remarkably similar, since the unfortunate customers were unable to tell the difference!
A fifth-century AD author also alleges that some retailers displayed food items such as eggs and onions floating in glass bowls of water so that they looked larger than their actual size.

The Christmas markets now so popular in British towns and cities may be a German import, but December markets were a tradition in ancient Rome too. Towards the end of the month, Romans celebrated the festival of Saturnalia in honour of the god Saturn, a time of year that the poet Catullus called “the best of days”. The toga was discarded in favour of more comfortable clothes, time was spent eating and drinking, slaves were allowed their liberty, at least temporarily, and friends exchanged presents.
Traditionally, gifts took the form of sigilla, small clay figurines. These gave the market its name, the sigillaria. Traders sold gifts from temporary stalls or canvas booths in the Campus Martius, the ‘Field of Mars’, in the centre of what would later become the medieval city.
We know that in the early empire the market was held in the Porticus Argonautarum, built by the general Agrippa in 25 BC. The satirist Juvenal writes that women, always anxious to keep up with their neighbours, demanded crystal vases and diamond rings from the stalls in this market.
Just as today, the December markets must have added to the holiday atmosphere in the city, with adults giving children money to spend on treats. This tradition allowed Emperor Tiberius to dismiss his nephew Claudius’s political ambitions by giving him money to spend at the sigillaria market rather than political office.

This detail from a third-century AD floor mosaic shows three slaves with a torch during the festival of
Saturnalia. One poet called this time of year “the best of days”. (AKG Images)

Men and women mixed freely in the Roman retail environment, working as both buyers and sellers. There was, however, some economic segregation. On the one hand, street traders sold everyday food at low prices and probably catered primarily for customers of relatively limited means. Many of these traders would probably have themselves been poor, retailing on a small scale in order to survive.
On the other hand, wealthy shoppers who wanted to buy food to impress their dinner guests could visit the macellum, a purpose-built luxury food market. Here large single fish were auctioned off to the highest bidder. Prized items, such as red mullet, could command incredibly high prices. Bankers would even have been on hand to lend money to those who could not cover the costs of their bids. The imperial biographer Suetonius records the disgust of Emperor Tiberius that three mullets went for 30,000 sesterces – more than 30 times the annual wage of a legionary soldier.
Alongside fish, shoppers could also find meat for sale, some of which was sourced from animal sacrifices (Christian shoppers had to try to avoid this). Other Roman delicacies available from luxury markets included songbirds, dormice and snails.
The wealthy were visited by retailers in their own homes, sometimes speculatively. Ovid regarded this as a nuisance for the lover, since, he complained, sellers always seem to come when your mistress is in a buying mood, beseeching you to shower her with gifts. And claiming to have no money wasn’t always a defence, as the seller would often take a credit note. Poets also joked about the sexual threat posed by retailers calling on elite women desperate to relieve the boredom of their domestic lives.
The retail trade was one of the most visible sectors of the urban economy in ancient Rome, with retailers locked in a fierce competition to relieve customers of their money. In this sense at least, Rome was a very modern metropolis.
Claire Holleran is lecturer in classics and ancient history at the University of Exeter.
Posted by Mary Ann Bernal at 4:30 AM