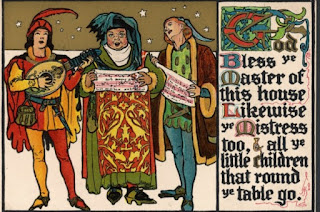 The Twelve Days of Christmas

Of all the Christmas carols we sing today, none presents more of a challenge than The Twelve Days of Christmas, with its baffling list of lyrics. What exactly are we to make of this aviary of birds – the swans, geese, doves, hens and calling birds – and what on earth is a partridge (strictly a ground bird) doing up a pear tree? The origins of the carol make things a little clearer. Historians generally agree that the verse first evolved as a festive memory game. The list of objects or animals grows with each verse and forfeits are imposed for forgetting one.

But that still leaves us with the problem of the partridge. While the English partridge is a creature of fields and moors, its French cousin is apparently more likely to find itself up a tree. And if the partridge really is French then it would be called une perdrix. Correctly pronounced ‘pere-dree’, suddenly this word sounds an awful lot like that pear tree. Could it, perhaps, just be an elaborate international game of Chinese whispers that has left us with a partridge stuck forever in a misheard pear tree?

One interpretation of the carol places its origin in the 16th century. The list of bizarre gifts given by the carol author’s ‘true love’ becomes a secret code for Catholics – whose religion had to be practised in secret after the Reformation – to share their beliefs. So the ‘true love’ becomes God himself and the partridge Jesus Christ. The ‘two turtle doves’ are the old and new testaments, ‘three French hens’ the Trinity, ‘four calling birds’ are the four Gospels, all the way through to ‘twelve drummers drumming’ – the twelve points of the apostles’ creed. If you were a Tudor child, wouldn’t you much rather recite this than your catechism?

2) We Wish You a Merry Christmas

What’s interesting about this catchy little carol are the customs it reveals. Both wassailing and mumming were still going strong under the Tudor monarchs, with carollers and players going from door to door performing. It was terribly bad luck not to reward their efforts with food and drink, including the ‘figgy pudding’ – an early version of what we now know as Christmas pudding. 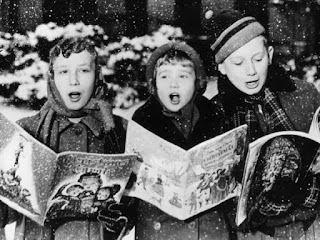 One popular 16th-century song was the carol we know today as Deck the Halls. Back then it was a favourite Welsh song, originally titled Nos Galan. It wasn’t until the 19th century that it acquired Christmassy words and became part of our own festivities. In its earliest form, Deck the Halls was just a folk song, but one with some rather naughty words. Translated directly, the Welsh text reads something like this:

Oh! how blessed are the blisses, Words of love, and mutual kisses, fal lal lal lal lal lal lal lal la These words would not have suited the prim Victorians, so when Thomas Oliphant came to write an English text for the melody in the 1860s he started from scratch, co-opting the dancing melody and lively ‘fa la la’ chorus for an altogether more innocent celebration of Christmas preparations. 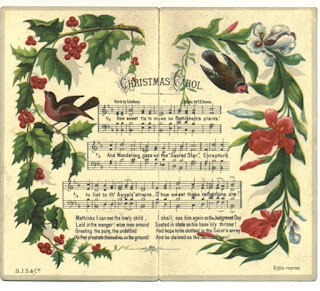 4) The Holly and the Ivy

Although this charming carol, based on an English folk tune, probably dates from the 17th century, its symbolism is far older. Both the festivals of Saturnalia and Yule placed great emphasis on evergreens. The Romans would exchange boughs of holly and ivy with their friends during the festival, while both the Scandinavians and the Anglo-Saxon pagans would decorate their homes with the evergreens they saw as symbols of eternal life.

So try as Christian carol writers might to impose their own symbols on the plants – the red holly berry as Jesus’s blood, the white holly flower his shroud – they have to work hard to displace earlier layers of meaning. Some think there’s a further secret layer of meaning to the carol. Is the holly, with its phallic prickles, a symbol of the masculine, and the clinging ivy of the feminine? English courtiers were fond of such hidden language and holly-and-ivy carols could have formed the basis of courting games.

A firm favourite throughout the 19th century was the lovely Silent Night. Schoolmaster Franz Xaver Gruber and priest Joseph Mohr first performed the carol in the church of St Nikola in Oberndorf, Austria, in its original German (Stille Nacht) on Christmas Eve 1818.

Legends attached to this timeless carol persist, to a point where it’s hard to dig out the truth from among them. One charming tale tells of mice chewing through vital sections of St Nikola’s organ, leaving the church without music at Christmas. The resourceful young teacher and priest, so the story goes, stepped in to save the service by composing a simple carol that could be sung with just guitar accompaniment.

These extracts are taken from Carols from King’s (BBC Books, £9.99) by Alexandra Coghlan, a music journalist and former Cambridge choral scholar.
Posted by Mary Ann Bernal at 4:00 AM