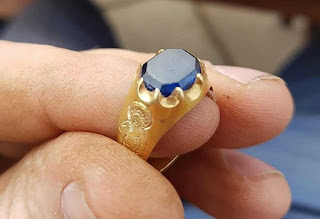 An amateur treasure hunter with a metal detector turned up a Medieval, gold ring that was set with a sapphire stone in Sherwood Forest—haunt of the legendary (or real) Robin Hood. Experts have examined the ring and believe it may date to the 14th century.

The amateur, Mark Thompson, 34, had been using an inexpensive detector that he bought on the online auction website Ebay. He is a painter of fork-lifts and had been searching for treasure for just a year and a half, says the Daily Mail.

The ring may net him a small fortune if it truly is worth its estimated maximum value of $87,000 (70,000 British pounds). He detected metal underneath his wand just 20 minutes into his recent session in Sherwood Forest in Nottinghamshire. The British Museum is examining the ring with the expectation of formally declaring it treasure. 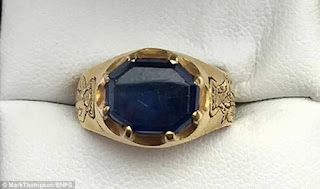 The British Museum is analyzing the ring and may declare it to be national treasure, though the finder would collect any reward. (Mark Thompson photo)

Online news accounts of the find said Mr. Thompson expected to find scrap metal of no value or coins of little value, but when he turned up the soil he saw the glint of gold.

One side of the ring depicts a baby, possibly the Christ child, and the other side depicts a female saint, both engraved into the gold of the ring. Mr. Thompson reported the find to proper authorities.

“I called my friend who came down to take a look and help see whether there was anything else related nearby,” Thompson told British news outlets. “If it does prove to be as valuable as we think it might be, it would completely change my life. I’m renting at the moment and I’d love to be able to buy a house or move into somewhere more comfortable.”

A regional finds liaison officer, Dot Boughton, said the ring is being examined by the coroner. The coroner may confirm the ring as treasure at an inquest, after which museums will have a chance to display the ring. Mr. Thompson would collect any reward.

Ms. Boughton has written a report, says the Sun, that compares the stone to another that adorns the tomb of William Wylesey, who died in 1374 and who was the archbishop of Canterbury.

The ring is not believed to be contemporaneous with Robin Hood, who, according to legend, operated with his gang out of Sherwood Forest in the 13th century, around the time of King John. It is unknown who Robin Hood truly was or even if he was more than just a legend but a real historical figure. 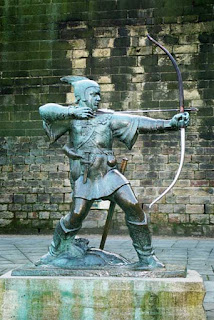 A statue of Robin Hood at a castle in Nottinghamshire, where the legendary robber was an outlaw in Sherwood Forest. ( Wikimedia Commons photo /Olaf1541)

He differs from other robbers of the time, including Fulk Fitzwarin and Eustace the Monk, who were real people and not just legendary. Legends say Robin Hood stole from the rich and gave to the poor.

One thing all three of these robbers and other fugitives have in common was that they used the king’s private forest reserves for refuge. The forests of Sherwood and Barnsdale, which are rife with old legends, were supposed to have been the kings’ private lands where they could hunt.

Historians think there may have been two historical figures from whom the legend of Robin Hood derives. Other outlaws also possibly took the name, which further confuses the historical record.

By Mark Miller
Posted by Mary Ann Bernal at 4:00 AM