Owner of Mummified Legs Likely to Be Nefertari, Favorite Queen of Ramses II 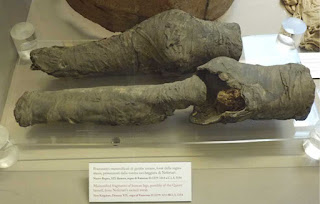 They are not very pretty to look at now, but a pair of mummified legs are now believed to have belonged to a much sought after queen of ancient Egypt who had been buried in an elaborate and beautifully decorated tomb in the Valley of Queens. Queen Nefertari was the favorite wife of ancient Egyptian monarch, Ramses II, as indicated by the wealth and beauty of her tomb. A pair of mummified legs were found in her tomb in 1904, however, researchers were never sure if they belonged to her as they could have come from a second occupant in the tomb. New research published in the Journal PLOS One has tentatively identified them as hers.

Nefertari is famous for her elaborate tomb and her possible royal ancestry and lineage from King Ay, who could have been either her father or grandfather. She was the second wife of Pharaoh Ramses II, wed to him when he was still crown prince under his father Sety I. Ramses II went on to marry three of his and Nefertari’s daughters.

PLOS One explains: “Based on the legible/decipherable inscriptions on a fragment of a faience knob head or pommel found in her tomb, speculations were raised,” says the article, written by Michael E. Habicht and a team of medical, scientific and archaeological academics. “The item carries the throne name ‘Kheper-Kheperu-Ra’ and, is, therefore, connected with King Ay, who ruled Egypt for a few years after Tutankhamun. However, Nefertari did not carry the title ‘Daughter of a King’, which suggests that she was probably not from the main royal line.” 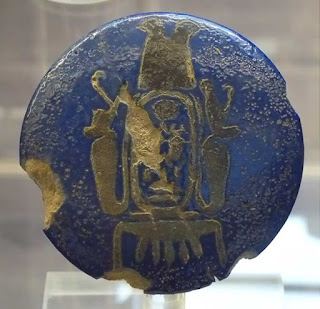 The faience knob head that states the throne name of Kheper-Kheperu-Ra or King Ay, possible grandfather of Nefertari. This knob head was found in her elaborate tomb that was looted in antiquity. ( PLOS One photo )

The article states that the mummified legs dated back to around 1250 BC, and belong to an individual who died at around 40 years of age. They were found alongside artifacts that “robustly support the burial of Queen Nefertari”. Nefertari, a consort, had eight children – four sons and four daughters. Her sons were preferred to Queen Isisnofret’s for succession, but the crown went to Isisnofret’s son Merenptah. Queen Nefertari attended the opening ceremony of Abu Simbel in the 24 th years of her husband’s reign, around 1255 BC. Thereafter, she disappeared from mention. She did not attend the large festival to mark Ramses’ 30 th year as king and probably died around his 25 th year as king. She likely lived to about 40 to 50 years. After her death, Ramses II married three of the daughters he fathered with Nefertari: Bint-Anat, Merytamun and Nebettau, the article states. 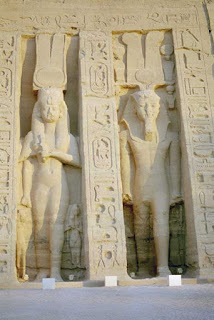 Nefertari, in a relief at Abu Simbel, is shown the same size as her husband, Ramses II, to show her important status in his New Kingdom reign. ( PLOS One photo )

The aim of the team’s research was to answer a question that has long simmered in Egyptology: Are these the legs of Queen Nefertari?

The researchers concluded they likely were, but there were still other hypotheses: They were the remains of one of her daughters. Likelihood: considerably low because her daughters had their own tombs in the Valley of Queens. They were the remains of a secondary burial of another personage from the 3 rd Intermediate Period. Sometimes tombs were reused. Conclusion: unlikely. The remains washed in from another burial. Conclusion: not likely as this tomb was higher than those around it. The legs and some of her things are on display at the Museo Egizio Turin, or the Egyptian Museum of Turin in Italy, where some of the researchers are from. Top image: Mummified legs found in Queen Nefertari’s tomb, possibly those of the queen herself, recent research shows. Her tomb, which had been looted centuries before, was opened in the Valley of Queens in 1904. A scholarly debate has been simmering since about whom the legs belonged to.

By Mark Miller
Posted by Mary Ann Bernal at 4:00 AM