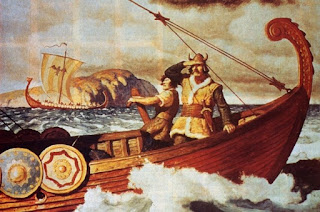 An image of Viking sailors making the voyage across the Atlantic between Europe and America. One sailor is seen wearing a horned helmet. In reality, says Janina Ramirez, Viking helmets would have been simple skullcaps. Painting by NC Wyeth, c1350. (Image by Hulton Archive/Getty Images)

The Viking Age stretched from the ninth to the 11th century. During this time Viking culture had a huge impact on great swathes of Europe, Asia, Africa and even America – many centuries before Columbus sailed the oceans. They could navigate the known world and commanded respect wherever they went. Yet the Vikings are surrounded by myths. Here are eight of them busted…

Myth 1: They wore horned helmets
Let’s get this out of the way straight off. There is no evidence that the Vikings wore horned helmets, and nothing like this has ever been discovered in any archaeological dig. They certainly wore helmets but they would have been simple skullcaps, designed to protect the head from impact. Having a pair of horns on your head in battle would not have been helpful if warriors were striking at you with clubs, swords or axes.

The helmet plaques from Sutton Hoo and Vendel suggest that god-like warriors donned helmets with protruding ‘horns’ (although these are actually hook-beaked birds), but the Viking raiders and traders did not.

The modern idea of Vikings in horned helmets originated in the 19th century, but it was Richard Wagner’s The Ring Cycle [a cycle of four operas by the German composer based loosely on characters from the Norse sagas] that seared it into the modern imagination. Costume designer Carl Emil Doepler (1824–1905) created horned helmets in the 1870s for the Viking characters, and so the myth was born. Numerous cartoonists, filmmakers and artists have continued this fantasy right up to the present day. 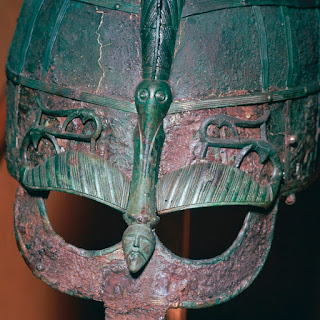 Detail of a Viking helmet from grave one at Vendel, Uppland, Sweden, 7th century. In the Swedish History Museum’s collection in Stockholm. (Photo by CM Dixon/Print Collector/Getty Images)

Myth 2: They were a defined group – ‘The Vikings’
The term ‘Viking’ comes from Old Icelandic ‘Viking-r, a creek-dweller’. The Viken was the primary mercantile region of Norway, so it is possible that this apparently homogenous group of people got their name from the extensive trading they undertook out of their busy ports. The word ‘Viking’ later becomes synonymous with ‘naval raids/naval expeditions’ and begins to function more as a verb. Individuals or groups would go ‘a-Viking’, which would mean they would leave their native lands during the warmer summer months, travelling in longboats to regions where they could trade and raid.

Contemporary writers don’t use the term ‘Viking’ to speak of a group of people. Instead they referred to Norse Men, people from the North, or simply pagans (remember, those recording events were usually Christian scribes). What’s more misleading still is that ‘Viking’ has been used to denote the entire Scandinavian region, including Denmark, Norway and Sweden. Each of these regions was governed by different leaders and they would have seen themselves as distinct from one another.

These were also very varied landscapes. The more northern regions, particularly the mountainous areas of Norway, were difficult to farm because of hostile weather, while southern parts, in the plains of Denmark, were more fertile. There were occasions when Scandinavian rulers combined their forces for greater military might, but the term ‘Viking’ is like describing all ‘Northern Europeans’ as the same.

Myth 3: They were extremely violent
The Vikings earned a place in history due to their protracted raids on often vulnerable monastic sites. Populated by literate scribes, these were the worst places to attack if you wanted a good record in Christian historical documents. Alcuin of York wrote to Bishop Higbald, declaring: “Never before has such terror appeared in Britain as we have now suffered from a pagan race. . . .The heathens poured out the blood of saints around the altar, and trampled on the bodies of saints in the temple of God, like dung in the streets.”

There is certainly evidence of the violent means Vikings used to suppress people, particularly in Britain. Many skeletons have been found with the instruments of their death still wedged in their bones. A skeleton in the North Hertfordshire Museum has a Viking spear head stuck in its neck. However, while some Vikings clearly deserved their reputation as ‘wolves of war’, others lived peaceful existences – farming, trading and integrating across the four continents that they settled.

What’s more, these were violent times, and the Vikings’ aggression was matched or exceeded by other groups during this period. One of the most famous names of the early medieval period, Emperor Charlemagne, carried out a form of genocide on people in Saxony. In the ‘Massacre of Verden’ in AD 782 his army murdered more than 4,500 Saxons who had been given to him by an ally. This was violence at its most stark. And yet, because Charlemagne had a Christian biographer writing a favorable account of his life, was killing pagans and was seen as ‘father of the church’, his place in history was secure. 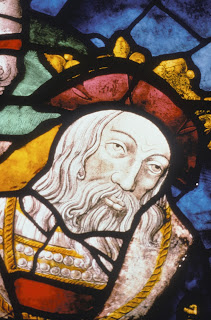 Myth 4: They took what they wanted and sailed away
Finds from Scandinavia do indicate that many Vikings pillaged the places they reached, bringing back coins from across the known world to be buried in hoards back in their homelands. However, many chose to remain in the lands they encountered, establishing lasting and important settlements.

One of the earliest and most extensive Viking settlements was Dublin, established by AD 841. Dublin grew into an industrially strong city with a thriving port and a mint where the first Irish coins were made. It wasn’t just Dublin that changed and developed under the Vikings. In York, the Anglo-Saxon city was relocated further towards the mouth of the river and settled by Vikings as a new and vibrant town – Jorvik. Iceland owes its settlement almost entirely to Vikings, under Ingólfr Arnanson in AD 874.

Normandy is another example of how Viking settlement could grow from violence into peaceful settlement. The Normans got their name from being ‘north-men’, yet they were given land in the north of France by king Charles III (aka Charles the Simple, 879–929) in an attempt to keep further Viking attacks at bay. Charles even gave his daughter to the Norwegian chieftain Rollo [who gained Normandy from Charles the Simple] in marriage, and the Viking settlers soon embraced French language and culture to develop into a new breed of conquerors. 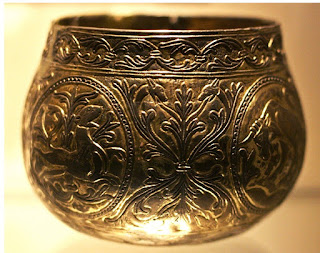 Decorative Viking hoard cup made from gold and decorated with animals and foliate patterns. Found buried in England. (Photo by Universal History Archive/UIG via Getty Images)

Viking religion was structured, hierarchical and based on a number of established narratives. It was not a religion of the book, and the mythology was transmitted orally. The Vikings didn’t practise their religion in temples but rather, like the ancient Celts, held places like groves and rivers sacred. It seems that priests were involved in religious ceremonies, and these were drawn from the heads of families. Priestly office was one of the honours bestowed on kings. The priest would perform sacrifices, either of objects, animals or people.

Viking cosmology differentiated between life on Earth – Midgard – and other spiritual realms. The gods were thought to inhabit Asgard, while the sacred tree Ysgadrill stretched its roots to the lands of the gods, giants and the dead. There were at least six realms, with a special place reserved for warriors – Valhalla.

Myth 6: They were ignorant and illiterate barbarians
The Vikings were not the ignorant and illiterate barbarians that Christian writers of the time believed them to be. While they didn’t write long texts like the Sagas until later in the Viking Age, they had developed a complex script – runes – that was loaded with symbolism. Each letter in the runic alphabet was also connected with a word; the ‘f’ rune was called ‘feoh’, which meant ‘wealth’ or ‘cattle’ – this makes sense within a barter society, as cattle hides were a way of measuring wealth.

Far from illiterate barbarians, the Vikings were some of the greatest naval engineers and travellers the world had seen. Prehistoric carvings and stone ships testify to the importance of boats within prehistoric Scandinavian society and religion. By the ninth century they had developed advanced ships that could traverse the hostile Northern Atlantic Ocean. They travelled further than any single race before the modern age, and took huge risks whenever they set out on a voyage. 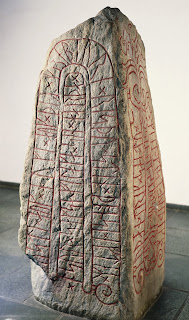 Myth 7: They treated their women badly
Viking society was mainly governed by ‘jarls’, the most important of whom could become kings. It was a largely military society, in which strength at arms was prized, yet wise and learned men and women could also wield power.

Women played an important role in Viking society. They were guardians of the keys to both property and wealth, particularly when their menfolk were abroad. There is evidence that some were trained to be military leaders too, with shield-maidens described throughout the mythology. Women were held in high esteem, with two buried within the famous Oseberg ship.

One of the most venerated characters in the Germanic pantheon was Freyja, goddess of sex, beauty, gold and death. She rides a chariot pulled by two cats and is accompanied by the boar Hildisvini.

Women did seem to have spiritual roles within Viking society, with wands discovered in many female graves. Furthermore, they had significantly better legal rights than their Christian counterparts and could divorce their husbands if they were violent or disrespectful towards them.

Myth 8: They were beardy and unkempt
Far from unkempt barbarians, Viking men and women were quite vain. Many finds like tweezers, combs and razors have been discovered, and it seems they went to great pains over their appearance.

They didn’t live in dark, dirty huts, but often in large and luxurious halls, like the magnificent ‘Heorot’ recorded in the epic poem Beowulf, which was the setting for lavish feasts, gifts of gold and display of skills at arms. 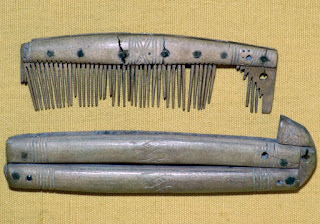 Viking period bone and deer antler comb and case from the Viking settlement at York, which is in the Yorkshire Museum, York. (Photo by CM Dixon/Print Collector/Getty Images)

The Vikings also had a good diet, which included a lot of fish – unsurprising given that most settlements were near to the coast. Evidence of Viking latrines shows they feasted on elk, bear, puffin, salmon and trout.

Dr Janina Ramirez is a British art and cultural historian and television presenter. She presented a BBC documentary on Icelandic literature, The Viking Sagas, and is author of The Private Lives of the Saints: Power, Passion and Politics in Anglo-Saxon England. To find out more, visit www.janinaramirez.co.uk
Posted by Mary Ann Bernal at 3:00 AM