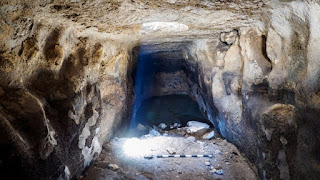 Israeli archaeologists digging near the city of Rosh Ha-Ayin have uncovered a remarkably large 2,700-year-old water system surrounded by wall engravings that dates back to the end of the Iron Age.

The system, which includes a 13-foot-deep reservoir that is 66 feet long, was built beneath a large structure with walls that extended nearly 164 feet, the Israel Antiquities Authority announced last week. Its size suggests that it was an administrative site built to control the region’s water supply.

“The structure exposed in this excavation is different from most of the previously discovered farmsteads,” said Gilad Itach, director of excavations for the IAA, in a statement. “Its orderly plan, vast area, strong walls and the impressive water reservoir hewn beneath it suggest that the site was administrative in nature and it may well have controlled the surrounding farmsteads.”

On the floor next to the reservoir, the archeologists found broken ceramic pieces that they believe are fragments of vessels that were used to draw water.

“It is difficult not to be impressed by the sight of the immense underground reservoir quarried out so many years ago,” Itach said. “In antiquity, rainwater collection and storage was a fundamental necessity. With an annual rainfall of 500 millimeters (20 inches), the region’s winter rains would easily have filled the huge reservoir.

“On its walls, near the entrance, we identified engravings of human figures, crosses and a vegetal motif that were probably carved by passersby in a later period. Overall, we identified seven figures measuring 15–30 centimeters (6-12 inches). Most have outstretched arms, and a few appear to be holding some kind of object.”

The site is being excavated ahead of the construction of a residential neighborhood outside Rosh Ha-Ayin, 14 miles east of Tel Aviv.

The excavators were assisted by high school students majoring in the Education Ministry’s Land of Israel and Archaeology track.
Posted by Mary Ann Bernal at 4:00 AM