7 things you might not know about the history of Thanksgiving 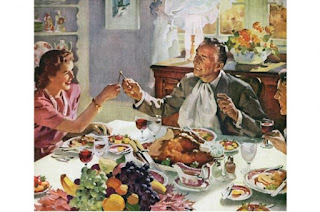 1) Tradition has it that the first Thanksgiving – a celebration of good harvest – took place in 1621, when English Pilgrims at Plymouth Plantation in Massachusetts shared a meal with their Native American neighbours. However, historian Michael Gannon told Florida Today that the first Thanksgiving celebration in North America actually took place in Florida half a century earlier.

On 8 September 1565, he says, following a religious service, Spaniards shared a communal meal with the local native tribe.

2) According to the US National Archives, on 28 September 1789 the first Federal Congress passed a resolution asking that the president of the United States recommend to the nation a day of thanksgiving. A few days later, George Washington issued a proclamation naming Thursday 26 November 1789 as a “Day of Publick Thanksgivin” – the first time Thanksgiving was celebrated under the new Constitution.

The dates of Thanksgiving celebrations varied as subsequent presidents came and went, and it wasn’t until Abraham Lincoln's 1863 Proclamation – in the midst of the Civil War – that Thanksgiving was regularly commemorated each year on the last Thursday of November.

3) The US National Archives says that in 1939, with the last Thursday in November falling on the last day of the month, Franklin D Roosevelt became concerned that the shortened Christmas shopping season might dampen economic recovery. He therefore issued a Presidential Proclamation moving Thanksgiving to the second to last Thursday of November.

Some 32 states consequently issued similar proclamations, but 16 states refused to accept the change. As a result, for two years two days were celebrated as Thanksgiving.

To end the confusion, on 6 October 1941 Congress set a fixed date for the holiday: it passed a joint resolution declaring the last Thursday in November to be the legal Thanksgiving Day.

4) The Macy's Thanksgiving Day Parade, which is televised nationally on NBC, has been marching since 1924. That year, the department store’s president, Herbert Strauss, organised a six-mile procession from Harlem to the Macy’s store in Herald Square. The parade featured animals – including elephants – from the Central Park Zoo, and was nearly three times as long as it is today: for the purposes of television filming, the route was later reduced to 2.5 miles. 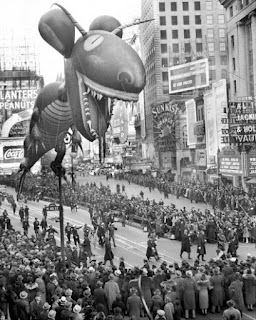 5) While turkey is today the bird of choice for Thanksgiving dinners across the United States, this was not always the case: according to History.com, for the first ever Thanksgiving in 1621 the Indians killed five deer as a gift for the colonists, meaning venison would most likely have been the dish of the day.

6) Each Thanksgiving, the president of the United States ‘pardons’ a hand-selected turkey, sending it to a farm where it lives out the rest of its days. But, contrary to popular belief, President George HW Bush was not in 1989 the first president to grant such a pardon.

According to the White House, the tradition dates to Lincoln’s days, when his son Tad begged him to write a presidential pardon for the bird meant for the family’s Christmas table, arguing it had as much a right to live as anyone. Lincoln complied, and the turkey lived. 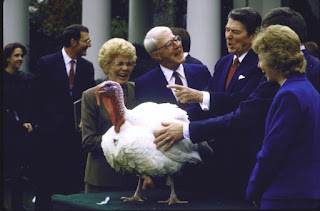 7) Each Thanksgiving, millions of Americans tune in to watch the Detroit Lions play American Football. This tradition dates to 1934, when the team took on the undefeated, defending World Champion Chicago Bears of George Halas. Despite losing the inaugural game, since then the Lions have played football every Thanksgiving except between 1939 and 1944.
Posted by Mary Ann Bernal at 2:00 AM

Email ThisBlogThis!Share to TwitterShare to FacebookShare to Pinterest
Labels: Thanksgiving