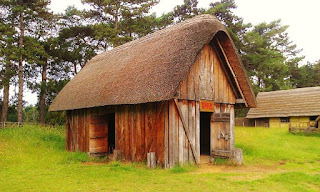 A reconstruction of a typical Anglo-Saxon structure

The Anglo-Saxons and the Vikings were two peoples that colonised Britain during the Middle Ages. A collection of Germanic tribes, the Anglo-Saxons first settled Britain during the 5th century, migrating in significant numbers from around 410 to 560 AD. The Vikings, who were mostly Scandinavian, began invading the British Isles in the early Medieval period and began settling as early as 865. The style of houses built by each culture are unique, but also share similarities. They are both described below.

Anglo-Saxon Dwellings
Several different designs made up the building of the Anglo Saxons. Their homes were primarily single-roomed structures with a sunken floor. The perimeter was marked out around the space required and inside that the ground was dug out to about a metre deep.

This space was an ingenious piece of engineering for a time that is often considered backwards or ‘dark’. The space was used for either storage or, more likely, for insulation. Archaeologists have found evidence that this space was filled with straw in the autumn which was then left to decay; this produced heat, meaning that the Anglo-Saxons invented a rudimentary form of central heating.

Around this space, posts were driven into the ground to form the superstructure. The roof was normally thatched with straw, creating a largely watertight environment. However thatching a building meant that the roof would have to be replaced often, as the straw rotted.

Inside, a fire pit or hearth would take pride of place in the centre of the house. A warm, dry environment was hard to come by in the Dark Ages, so the fire pit needed to be central, offering comfort to the residents. Above it a smoke-hole would sometimes be cut in the roof to allow the fumes to escape; some homes didn’t have this and were instead built with a high ceiling into which the smoke could escape.

The floor was usually carpeted with rushes, which were used because they provided a warmer surface than the cold ground. They also were easy to replace and were therefore perfect for keeping the house clean, particularly during a period when people often house-shared with animals.

Doors were hinged either with wood or iron if the owner could afford it and boasted a latch and a lock if the building doubled as a workshop. 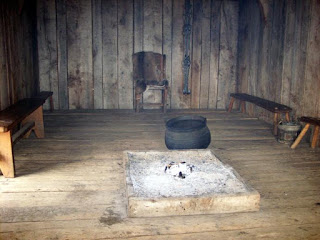 The typical centre of an Anglo-Saxon home was the hearth.

Viking Housing
Scandinavian houses were similar in design to Saxon structures, but often used less wood and had larger roofs that would reach almost to the ground. This was for two reasons: one, there was much less timber available to build houses with and most available wood would be used to fashion boats; secondly, the thatch offered more insulation than wooden walls and Scandinavia is much colder than Britain, so a larger percentage of the building was covered in the heat-retaining material. viking house 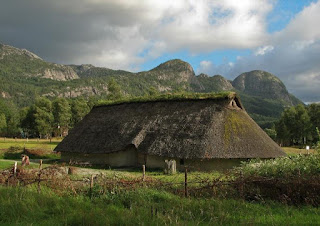 This is a reconstructed Longhouse; Landa outdoor museum in Forsand, Norway. Its low walls and large amounts of thatching is characteristic of Dark Age Scandinavian buildings.

A uniquely Scandinavian design that flourished in Britain in the wake of the Viking invasions was the longhouse, a much larger construction that had bowed walls. The walls curved outwards, creating an even larger space inside for communal feasting and entertaining. The construction was particularly favoured amongst the ruling classes. 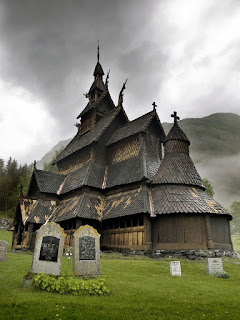 A Stave Church built in the twelfth century in Norway. It still stands today.

These wooden buildings of both peoples, if properly constructed and looked after, could last for hundreds of years. For example, there are a number of wooden Scandinavian churches built in the early Medieval period that still stand today. Despite this, many, particularly amongst the nobility of both the Anglo-Saxons and the Norsemen, would annually tear their house down and built a new structure form scratch; it was seen as unfashionable to live in an old house.

Craig Bessell: Contributing Author at Made From History. I Graduated from Cardiff University in 2014 with a Bachelor of Arts in History. I love the stories more than the dates, but they're important too.
Posted by Mary Ann Bernal at 2:00 AM