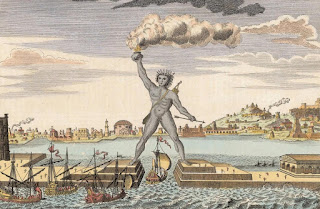 The Colossus of Rhodes was one of the Seven Wonders of the Ancient World, and the most ambitious and tallest statue of the Hellenistic period. The last of the seven wonders to be completed, it was a statue built to thank the gods for victory over an invading enemy. Bearing a striking resemblance to the Statue of Liberty in the United States, the Colossus of Rhodes stood for less than sixty years before being destroyed by an earthquake. Some mystery remains as to where it was really located and what happened after it was destroyed.

Since ancient times, the small Greek island of Rhodes has been a main intersection between the Aegean and the Mediterranean seas, and was an important economic center in the ancient world. The capital city, also named Rhodes, was built in 408 BC and was designed to take advantage of the island's best natural harbor on the northern coast. In 357 BC the island was conquered by Mausolus of Halicarnassus but fell into Persian hands in 340 BC and was finally captured by Alexander the Great in 332 BC. In the late fourth century BC, Rhodes allied with Ptolemy I of Egypt against their common enemy, Antigonus I Monophthalmus of Macedonia. In 305 BC, Antigonus sent his son Demetrius to capture and punish the city of Rhodes for its alliance with Egypt. He attacked the island with 40,000 men and weapons and started a war which lasted a year. A relief force of ships sent by Ptolemy arrived in 304 BC, and Antigonus’ army abandoned the siege, leaving behind most of their siege equipment. To celebrate their victory, the Rhodians sold the equipment and decided to use the money to build a huge statue, to their sun god, Helios, called the Colossus of Rhodes. Nearly as tall as the iconic Statue of Liberty built 2,000 years later, the Colossus was also erected as a celebration of freedom. 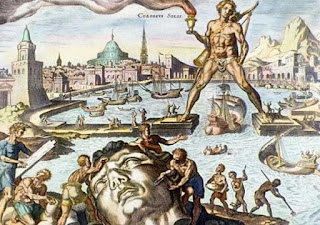 The Colossus of Rhodes, depicted in this hand-colored engraving, was built about 280 BC. Standing 30 meters (100 feet) high, it was built to guard the entrance to the harbor at Rhodes. The ancient Greeks and Romans considered it to be one of the Seven Wonders of the World. Public Domain

According to Pliny the Elder, a Greek historian who lived several centuries after the Colossus was built, its construction took 12 years and was completed in 280 BC. The pride of the city, the people thought the statue would stand forever. Charles of Lindos was its architect and was given the task of building a statue nearly twice as tall as any ever built.

The base was made of white marble and the structure was gradually erected as bronze plates were fortified over an iron and stone framework. According to the book of “Pilon of Byzantium”, 15 tons of bronze was used, along with 9 tons of iron, though these numbers seem low to modern architects. Bronze came from another unlikely source. It was decided to fashion the colossus from the bronze weapons of their defeated invaders along with a captured giant enemy siege tower, some nine stories in height which served as the scaffolding of the project. When the statue was finally finished, it was dedicated with a poem: Preserved in Greek anthologies of poetry is what is believed to be genuine dedication text for the Colossus:

To you, o Sun, the people of Dorian Rhodes set up this bronze statue reaching Olympus,

When they had pacified the waves of war and crowned their city with the spoils taken from the enemy. Not only over the seas but also on land did they kindle the lovely torch of freedom and independence. For to the descendants of Herakles belongs dominion over seas and land.

The Colossus of Rhodes was a statue of superhuman proportions. It stood over 107 feet (30 meters) high, making it one of the largest statues in the ancient world; the thigh alone was supposedly 11 feet (3 meters) in width, the ankle 5 feet (1.5 meters) in length. 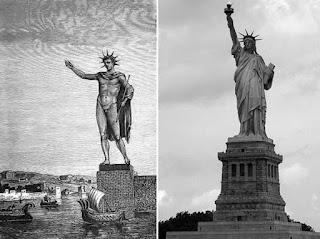 Colossal statues, then and now. Left, illustration of the Colossus of Rhodes in ancient Greece, and right, the Statue of Liberty of the United States of America. (Public Domain)

Today, nobody’s exactly sure how the Colossus of Rhodes looked or what its posture was. The only thing for certain is that it did not stand with its legs stretched across the harbor entrance as depicted in many medieval drawings. If the completed statue had straddled the harbor, the entire mouth of the harbor would have been effectively closed during the entirety of the construction. 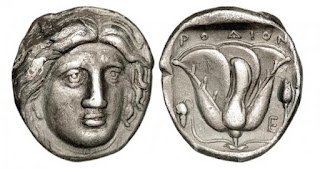 Silver coins from Rhodes circa 316 – 305 AD with Helios represented on one side, a rose on the other. Was this the face of the Colossus of Rhodes? Wikimedia Commons

An idea of what this statue may have looked like comes down through images depicted on a few coins that survived the era. Accounts from eye-witnesses and story-tellers tell of an enormous and amazing statue. Depictions of the time speak of a naked man with a cloak over his left arm or shoulder proudly facing east to the rising sun, torch in one hand, and spear in the other. Some think the statue was wearing a spiked crown, shading its eyes from the rising sun with its right hand, or possibly using that hand to hold the torch aloft in a pose similar to one later given to the Statue of Liberty. Although we do not know the true shape and appearance of the Colossus, modern reconstructions with the statue standing upright are more accurate than older drawings. 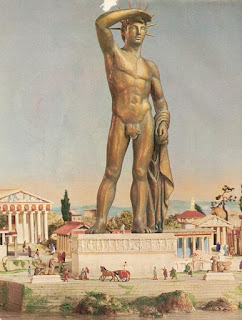 The Colossus of Rhodes, and its possible stance/appearance. Wikimedia Commons

The statue stood for 56 years until the island of Rhodes was hit by an earthquake in 226 BC, destroying much of the city and causing the statue to break off at the knees and topple over into pieces. It is said that the Rhodians received an offer from Ptolemy III Eurgetes of Egypt to cover all restoration costs for the monument but declined. The Rhodians consulted the oracle of Delphi and feared that the statue had somehow offended the god Helios, who used the earthquake to throw it down. Though it lay in ruins on the ground, thousands came and were astounded at the sight of it. Pliny the Elder wrote:

Even as it lies, it excites our wonder and admiration. Few men can clasp the thumb in their arms, and its fingers are larger than most statues. Where the limbs are broken asunder, vast caverns are seen yawning in the interior. Within it, too, are to be seen large masses of rock, by the weight of which the artist steadied it while erecting it.

The statue would go untouched for 900 years or until the Arab invasion of Rhodes in 654. The remains are said to have been melted down to be used as coins, tools, artifacts and weapons. Legend says that a Syrian junk dealer hauled the bits away on nearly 1000 camels. Many believed it impossible to build such a structure with the technology of the time and doubt grew that it ever existed at all. However, in recent years, new evidence has come to light in and around the harbor at Rhodes. Recent archaeological finds have shown that the Colossus stood on the hill overlooking the bay where a medieval castle now stands. Experts found carved stones dating back to the time of the Colossus. These were later used to build a fort that now stands at the entrance to the harbor. It is believed that these were the very stones used to form the base of the giant statue.

The amazing Colossus of Rhodes towers over all others in the annals of the wonders of the ancient world. 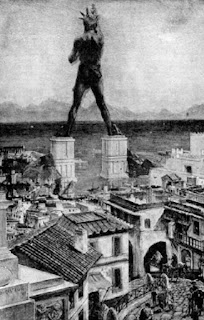 Artist's misconception of the Colossus of Rhodes from the 1911 Book of Knowledge. Public Domain

By Bryan Hilliard
Posted by Mary Ann Bernal at 1:30 AM