A brief history of medieval magic 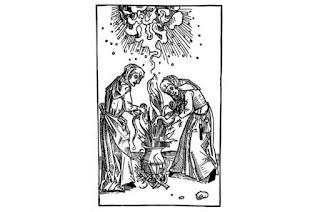 From Narnia to Harry Potter, so many modern manifestations of magic come from the Middle Ages. Hetta Howes, who is writing a PhD at Queen Mary, University of London, investigates…

Want to get rid of an unwanted husband? Coat yourself in honey, roll naked in grain and cook him up some deadly bread with flour milled from this mixture. Want to increase the amount of supplies in your barn? Leave out child-sized shoes and bows-and-arrows for the satyrs and goblins to play with. If you’re lucky, they might steal some of your neighbour’s goods for you in return. These unusual charms and medical tips, which featured in medieval books, sound suspiciously like magic.

But alongside these weird and wonderful spells and superstitions, medieval history paints a picture of a people actually more enlightened than their Renaissance successors. So what was medieval magic really like?

Season of the witch
The now all-too-familiar figure of the ‘witch’ – that frightening old hag with warts on her nose and curses at her fingertips – didn’t appear until the 15th century. Despite being dubbed ‘The Renaissance’ and ‘The Age of Discovery’, the centuries that followed [the Renaissance lasted from the 14th to the 17th century] were witness not only to ruthless witch-hunts, but also to a new belief in the reality of magic.

In the Middle Ages, the practice of magic was not yet imagined to be essentially ‘female’. In fact, according to court records from the first half of the 14th century, the majority of those tried for maleficium (meaning sorcery, or dark magic) were men. That was because the most troubling form of magic – necromancy – required not only skill, learning and preparation, but above all education, which was less readily available to women. Necromancy involved conjuring the dead and making them perform feats of transportation or illusion, or asking them to reveal the secrets of the universe. Because many books describing necromancy were Latin translations, anyone wanting to practise the craft would need a good working knowledge of Latin.

It wasn’t until the publication of Heinrich Kramer’s Malleus Maleficarum (or, Hammer of Witches) in 1487 that the specific connection between women and satanic magic became widespread. Kramer warned that “women’s spiritual weakness” and “natural proclivity for evil” made them particularly susceptible to the temptations of the devil. He believed that “all witchcraft comes from carnal lust”, and that women’s “uncontrolled” sexuality made them the likely culprits of any sinister occurrence.

Black sabbath
Hand-in-hand with this increased emphasis on women came a shift in the perception of magic. Evidence suggests that medieval church authorities (whose successors would later spearhead the witch-hunts) didn’t really believe magic was real – although they still condemned anyone who claimed to practise it.

The 10th-century canon, Episcopi, describes women who, seduced by illusions from the devil, believed they could fly on the backs of “certain beasts” in the middle of the night alongside the goddess Diana. The canon dismissed these women as “stupid” and “foolish” for actually believing that they could accomplish such things. They were criticised in the text for being tricked rather than for practising any real, magical mischief. 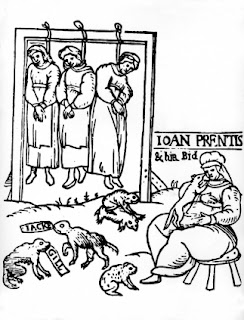 Afterwards, the devils worshipped would watch their women for signs, and then do their bidding. For example, if a witch put her broomstick in water and spoke certain words, a devil might cause a storm or flood. Magic of this kind wasn’t always harmful, however. Witches might be able to heal as a result of a pact, or perform other kinds of positive magic. But, because of their fundamental belief that all magic was carried out by demons and devils, inquisitors condemned it just the same.

Magic or medicine?
Certain practices – which sound to us very much like magic – would have been classed as science or medicine in the Middle Ages. William of Auvergne, a 13th-century French priest and bishop, certainly condemned most magic as superstition. However, he admitted that some works of “natural magic” should be viewed as a branch of science: as long as practitioners didn’t use this “natural magic” for evil, they weren’t doing anything criminal. Sealskin could quite happily be used as a charm to repel lightning; vulture body parts could be used as a protective amulet; and gardeners could get virgins to plant their olive trees without any anxiety – this was, after all, a scientific way of promoting their growth.

A number of healing practices from the Middle Ages also sound very much like magic to a modern reader: one doctor instructed physicians to place the herb vervain in their patient’s hand. The presence of the herb would, it was thought, cause the patient to speak his or her fate truthfully, offering the physician an accurate prognosis.

Sympathetic magic was another well-known technique – it used imitation to produce effective results. For example, liver of vulture might be prescribed as medicine for a patient suffering from liver complaints. Meanwhile narrative charms – a complex version of sympathetic magic, hinged on the belief that telling a particular story could help channel healing power to the patient – were usually accompanied by a more ‘medical’ application, like a poultice. According to one medical treatise, wool soaked in olive oil from the Mount of Olives could staunch blood when coupled with a spoken story about Longinus, a man who was famously healed of his blindness by the blood of Christ. Religious elements were blended with the magical. 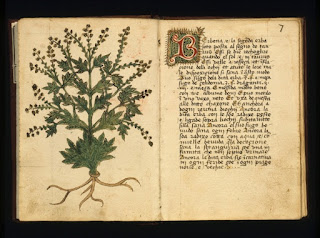 Details of the properties of verbena or vervain, from a 16th-century book about herbs. When placed in a patient's hand the presence of the herb would, it was thought, cause them to speak his or her fate truthfully, offering the physician an accurate prognosis. (© The Art Archive/Alamy)

Although some of these methods were considered superstition by the Christian church in the Middle Ages, they were never associated with demonic magic until the dawning of the witch hunts. Even though women tried for witchcraft were accused of much more diabolical doings than using charms or stories to heal, many women became afraid of carrying out such practices, for fear of attracting suspicion of darker deeds.

Medieval history offers us a magical potion of stories and practices infused with charms, herbs and superstition. While some of the examples might seem curious to us, they are evidence of a people trying to make sense of and control their surroundings – just as we do today.

Hetta Howes is writing a PhD at Queen Mary, University of London on the subject of water and religious imagery in medieval devotional texts by and for women.
Posted by Mary Ann Bernal at 2:30 AM