Discovery of 1,000 Sealings Reveals an Ancient City’s Devotion to the Graeco-Roman Pantheon 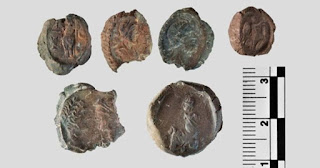 Classical scholars from the Cluster of Excellence "Religion and Politics" of the University of Münster discovered a large number of sealings in south-east Turkey. "This unique group of artifacts comprising more than 1,000 pieces from the municipal archive of the ancient city of Doliche gives many insights into the local Graeco-Roman pantheon -- from Zeus to Hera to Iuppiter Dolichenus, who turned into one of the most important Roman deities from this site," classical scholar and excavation director Prof. Dr. Engelbert Winter from the Cluster of Excellence explains at the end of the excavation season.

"The fact that administrative authorities sealed hundreds of documents with the images of gods shows how strongly religious beliefs shaped everyday life. The cult of Iuppiter Dolichenus did not only take place in the nearby central temple, but also left its mark on urban life," says Prof Winter. "It also becomes apparent how strongly Iuppiter Dolichenus, originally worshipped at this location, was connected with the entire Roman Empire in the 2nd and 3rd centuries AD: many of the images show the god shaking hands with various Roman emperors." 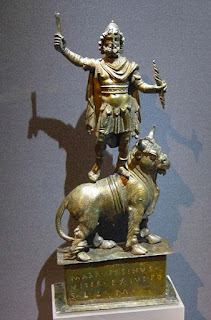 The excavation team has been exploring the temple of the soldier god Iuppiter Dolichenus for 17 years. This year, the team focused on the urban area. "Under a mosaic dated to 400 AD within a complex of buildings, we were able to uncover an even older mosaic floor of equally high quality," Prof. Winter explains. "According to the present findings, there is much evidence of a late antique church. This could turn out to be an important contribution to understanding the history of early Christianity in this region." The excavations in the three-local aisled building complex began in 2015. Up to the present, 150 square meters of the large central nave bordered by columns have been uncovered. Engelbert Winter: "Apart from the architecture, small finds from the surrounding area also point to the existence of a church, such as the fragments of a marble table or the mentioning of a deacon attested by an inscription." 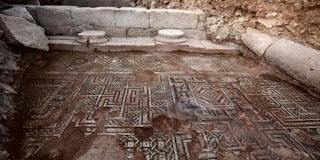 "City center discovered"
The researchers have now also discovered the public center of the city of Doliche, which they had first located in the eastern part of the city by geophysical prospecting. "This assumption has been confirmed," the excavation director explains. "We were able to uncover parts of a very large building: it is a public bath from the Roman Iron Age with well-preserved mosaics. Since hardly any Roman thermal baths are known so far in the region, this discovery is of great academic importance." The research team from Münster also gained new insights to the extension of the urban area and the chronology of the city: an intensive survey carried out this year on the settlement hill of the ancient city, Keber Tepe, led to quite surprising results. "A large number of finds from the Stone Age indicate that Keber Tepe was obviously an extremely important place very early on. Doliche reached its greatest extent later, in the Roman and early Byzantine periods." 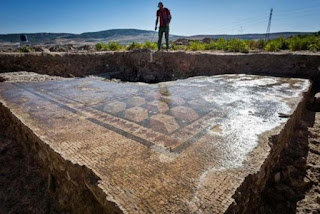 Excavation director Winter says about the large number of discovered sealings: "Many sealings can be attributed to the administrative or official seals of the city due to their size, frequent occurrence, and in some cases also due to inscriptions. In addition to the images of the 'city goddess' Tyche, the depictions of Augustus and Dea Roma deserve special attention, since they point to the important role of the Roman emperor and the personified goddess of the Roman state for the town of Doliche, which lies on the eastern border of the Roman Empire. However, the central motif is the most important god of the city, Iuppiter Dolichenus. In the 2nd and 3rd centuries AD, his cult spread into large parts of the Mediterranean world, extending as far as Britain," explains Prof. Winter. Therefore, it is not surprising that hundreds of documents were sealed with images showing a handshake between this deity and an emperor. "It was a sign of the god's affinity to the Roman state."

The images also provide insights into the cult itself. In addition to sealings showing busts of Iuppiter and his wife Iuno, there are depictions of the divine twins Castor and Pollux, the sons of Zeus. "The sons of Zeus, also known as Dioscuri or Castores Dolicheni, are often portrayed as companions of Iuppiter and therefore play an important role in the cult," Prof. Winter explains. 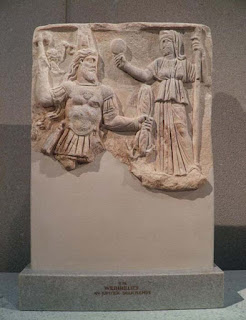 Votive relief to Jupiter Dolichenus and Juno, Jupiter with tiara, sword, an ax and lightning bundle, Juno has a mirror and a scepter, 3rd century AD, from Rome, Neues Museum, Berlin. (CC BY-SA 2.0)

Archaeological park for tourists
Under the supervision of Prof. Winter from the Cluster of Excellence "Religion and Politics," the Asia Minor Research Center of the University of Münster has been excavating the main temple of Iuppiter Dolichenus with the support of the German Research Foundation (Deutsche Forschungsgemeinschaft, DFG) since 2001. Each year, the international group of archaeologists, historians, architects, restorers, archaeozoologists, GIS analysts and excavation assistants have uncovered finds from all periods of the 2,000-year history of the place of worship. Among them were the massive foundations of the first Iron Age sanctuary, numerous monumental architectural fragments of the Roman main temple, but also the extensive ruins of an important Byzantine monastery which was built by followers of the Christian faith after the fall of the ancient sanctuary. In order to make the excavation site near the ancient town of Doliche accessible to a broad public, an archaeological park is being developed. Prof. Winter's research project at the Cluster of Excellence "Religion and Politics" is closely connected with the excavation. It is titled "Syriac Cults in the Western Imperium Romanum."

The article, originally titled ‘More than 1,000 ancient sealings discovered,’ was originally published on Science Daily.
Posted by Mary Ann Bernal at 1:30 AM