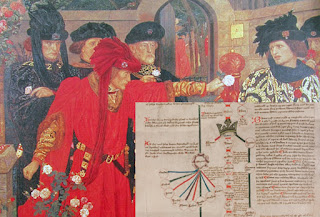 The Game of Thrones continues to attract an audience and many people interested in it also have a passion for history and the true stories that inspired the series. Now you can gain some new insight into the who’s who of the Wars of the Roses and their legendary ancestors by exploring a digital version of English royal family genealogy as depicted on the Canterbury Roll.

The Canterbury Roll provides a handwritten 15th-century story of the beginnings of England. It starts with suggesting English royals have descended from the biblical Noah, to the legendary Brutus of Troy, and then it traces their heritage until King Edward IV. As you can see by examining the digital edition of the Canterbury Roll, fiction has mixed with history in this document.

A section of the Canterbury Roll, a medieval scroll depicting the genealogy of the English royal family. (The University of Canterbury)

Live Science reports that the online version of the medieval scroll has been made available thanks to the work of a team of researchers and students at the University of Canterbury in New Zealand. They joined up with some experts from the United Kingdom to translate and interpret the scroll. The scholars from the UK are especially interested in exploring how the document was altered during the Wars of the Roses, when the document changed hands between the warring houses and one house may have altered the story of the other.

Chris Jones, a medieval historian and a researcher on the project from the University of Canterbury, discussed the importance of the Canterbury Roll in a statement:

"It's visually striking. The Wars of the Roses are what 'Games of Thrones' is based on, and this is the Wars of the Roses laid out across a 5-meter [16 feet], visually spectacular document. It is not the only manuscript roll from this period to exist in the world, but, uniquely, it features contributions from both [of] the key players in the Wars of the Roses — it was originally drawn up by the Lancastrian side in the conflict but it fell into Yorkist hands, and they rewrote part of it." 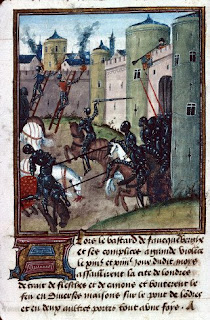 As Thomas de Fauconbergh beseiges London (setting fire), he is attacked by Edward IV and his troops. (Public Domain)

As Bryan Hill explained in an Ancient Origins article discussing the Wars of the Roses and the Game of Thrones:

Wars of the Roses – key players in the Houses of Lancaster and York. (AGZYM)

The digital version of the Canterbury Roll is still a work in progress, but it already provides an interactive depiction of the scroll. Viewers have the option to click, zoom, and read passages on the scroll in English and Latin, as well as explore notes and expert interpretations of the document. It is expected that the full 5-meter document, along with its translations, will be available online by the end of 2018.

Top Image: Detail of ‘Plucking the Red and White Roses in the Old Temple Gardens’ (c.1908) by Henry Arthur Payne. (Public Domain) Insert: Detail of part of the Canterbury Roll, a medieval scroll detailing the genealogy of the two houses in the Wars of the Roses. (The University of Canterbury)

By Alicia McDermott
Posted by Mary Ann Bernal at 2:00 AM