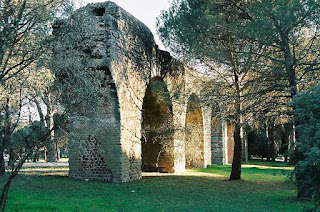 While technically the aqueduct is not a Roman invention, the Romans greatly improved on previous examples found in the ancient world in places like Egypt and Babylonia. Crucially, they exported hundreds of examples of their advanced version of the aqueduct, forever changing the face of urban civilisation wherever they settled.

The first aqueduct in Rome was constructed in 321 BC. Many vestiges of Roman aqueducts remain as enduring monuments to Ancient Rome’s accomplishments in engineering and as reminders of the vast reach of the Empire. They can still be seen throughout the ancient power’s former territories, from Tunisia to central Germany and in places as far flung as France, Spain, Portugal, Greece, Turkey and Hungary.

A Lasting Legacy of Function
As opposed to purely symbolic tributes to Rome’s own grandeur, aqueducts served practical purposes and improved the quality of life for countless people. In fact, many Roman cities would have been much smaller and some would not even have existed if it were not for these technological wonders of the day.

Sextus Julius Frontinus (c. 40 – 103 AD), a Roman politician who was Water Commissioner under Emperors Nerva and Trajan, wrote De aquaeductu, an official report on the aqueducts of Rome. The work provides much of the information we have today on the technology and details of the ancient aqueducts.

With typical Roman conceit, he compares Rome’s aqueducts with the monuments of Greece and Egypt, despite the fact that Rome also had plenty of its own ‘useless’ structures and also built them throughout its territories.

. . . with such an array of indispensable structures carrying so many waters, compare if you will, the idle Pyramids or the useless, though famous works of the Greek. —Frontinus

Water an Empire and Watch It Grow
By importing water from mountain springs, cities and towns could be constructed on the dry plains, as was often the custom of the Romans. Aqueducts furnished these settlements with a reliable supply of clean drinking and bathing water. Similarly, Rome itself used large aqueducts and an extensive sewer system for bringing in clean water and removing refuse, resulting in a massive city that was incredibly clean for the day. 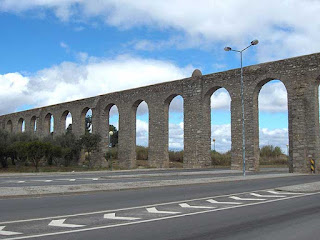 How Aqueducts Work
A considerable feat of ancient engineering that was not bested until modern times, Roman aqueducts made good use of the knowledge and materials available at the time.

If we consider the distances traversed by the water before it arrives, the raising of the arches, the tunnelling of mountains and the building of level routes across deep valleys, we shall readily admit that there has never been anything more remarkable in the whole world. —Pliny the Elder

The structures were built from stone, volcanic cement and brick. They were also lined with lead, a practice — along with the use of lead pipes in plumbing — that certainly contributed to health problems among those who drank from them. In fact, there are several Roman texts which ascertained that lead pipes were unhealthier than those made of terra cotta.

Ducts were designed to carry water from higher elevations by using gravity. Though we associate aqueducts with the large arches used to create sufficient height when necessary, as in the case of valleys or other dips in elevation, much of the system was at ground level or underground. Rome itself also used elevated reservoirs that fed water into buildings via a system of pipes. 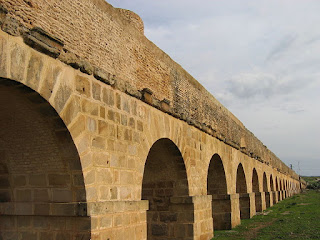 The Benefits of Aqueducts in Roman Life
Aqueducts not only supplied cities with clean water, as part of an advanced system they helped carried away polluted water through sewer systems. While this contaminated rivers outside the cities, it made life within them much more bearable.

The system made indoor plumbing and running water available to those who could afford it and enabled a culture of public baths to permeate the Empire.

Besides urban life, aqueducts facilitated agricultural work, and farmers were permitted to draw water from the structures under permit and at set times. Industrial uses for aqueducts included hydraulic mining and flour mills.

By Graham Land
Graham is an editor and contributor at Made From History. A London-based writer originally from Washington, DC, he holds a master's degree in Cultural History from Malmö University in Sweden
Posted by Mary Ann Bernal at 1:30 AM