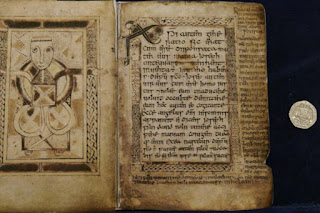 The monastery where the significant Scottish text called the ‘Book of Deer’ was created disappeared from the pages of history about 1,000 years ago. After a decade of excavations looking for the site, archaeologists believe they are finally on the correct path.

According to The Scotsman, an excavation team working with the Book of Deer project have unearthed a hearth, charcoal, pottery, post holes, and a layer of stone near Old Deer in Aberdeenshire, Scotland. Carbon dating places the site to between 1147 and 1260, in the medieval monastic period and the stone and post holes suggest a circular building was once located at the site.

Archaeologist Alison Cameron of Cameron Archaeology, who led the dig, called the results of the carbon-dating “extremely exciting”, saying:

“A medieval date for this hand-made pottery suggests the building underneath the layers where the pottery had been found might also be medieval in date. The date for the charcoal is 1147 to 126 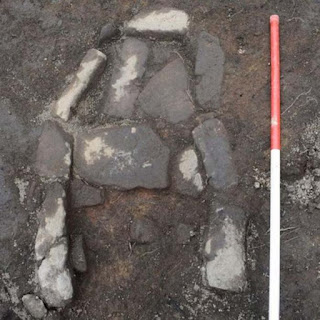 A stone hearth was one of the archaeological features uncovered during excavations. (BBC ALBA

BBC News reports the recent excavations were aimed at exploring a field near the ruins of Deer Abbey. Focus was placed on that location because a geophysical survey found underground anomalies there. Before the excavations in the field, archaeologists were looking for the monastery in a church graveyard. As Ms. Cameron said: “This is a site that we don’t know anything about. The possibility of locating one building and perhaps more nearby would be of national importance. The team are very excited about this.”

Bruce Mann, an archaeologist for Aberdeenshire Council, expressed his hope for the discovery of the monastery to The Scotsman. He said, “These latest discoveries may at last hint that the mystery has finally been solved. More work obviously has to happen, but regardless of what this finally turns out to be, it is a significant find for not only Old Deer, but Aberdeenshire and beyond too.” 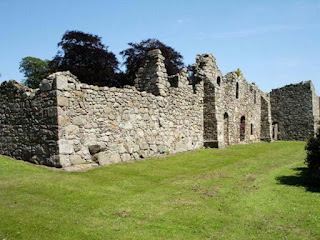 “is said to be the only pre-Norman manuscript revealing tenth century northeastern Scottish culture's society and religious traditions, and is the earliest known Gaelic document in existence […] the greatest intrigue for those drawn to this ancient text lies within the handwritten notations made in its margins and other blank areas, and not necessarily within the text itself. The notations, also referred to as 'notitiae', are written in the type of Gaelic typically spoken by the upper classes in the early twelfth century region of Buchan […]”

Dr. Michelle Macleod, lecturer in Gaelic at Aberdeen University, explained some of the significance of the Book of Deer:

“There are some deviations in the language from the shared common Gaelic of Scotland and Ireland which had been used in earlier manuscripts. These deviations, of which there are several, are the first written indication that the languages are separating and would be an indication of what people were likely saying. The Book of Deer is a tiny book but it has left a huge legacy for us, not only in the north-east but for the whole of Scotland. We had to wait another 200-300 years after the Book of Deer to find any more evidence of written Scottish Gaelic.” 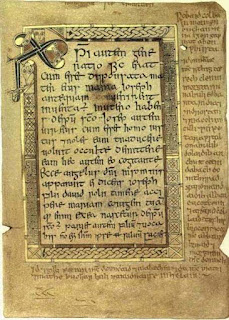 Folio 5r contains the text of the Gospel of Matthew from 1:18 through 1:21. Note the Chi Rho monogram in the upper left corner. The margins contain Gaelic text. (Public Domain)

Anne Simpson, chair of the Book of Deer Project, further emphasized the importance of the book, by saying: “The book is as significant as the Book of Kells in Dublin but it is still amazing how even people locally don’t know about it. We have been looking for the monastery for a long time, so there is a great deal of excitement about the discoveries.” 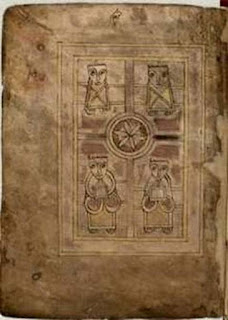 Top Image: The notes in the Book of Deer are the first written examples of Scottish Gaelic and they hint at the location of the monastery where it was written. Source: The Book of Deer Project