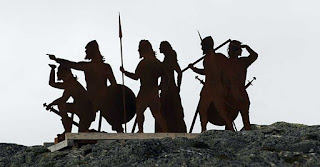 An archaeologist believes she is one step closer to finding a “lost Viking settlement” in North America, which would be one of the most significant discoveries this century, so far.

Birgitta Wallace is a senior archaeologist emerita with Parks Canada who has extensively researched the movements of Vikings in North America, and in a recent essay in Canada's History magazine she talked of her lifelong search for “Hóp,” a Viking settlement mentioned in ancient Norse sagas. Centuries old sea-tales offer natural and geographic clues to Hóp’s whereabouts, and it was said to have had “wild grapes, abundant salmon and inhabitants who made canoes out of animal hides.” 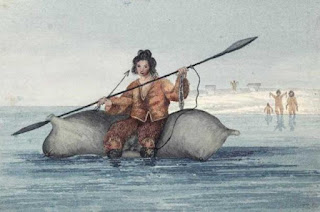 Drawing of a Sadlermiut man on inflated walrus skins bringing two dried salmon and a flint-headed arrow as a peace offering to newcomers. (1824) By Captain George Francis Lyon. ( Public Domain )

The only other positively known Viking settlement in North America is situated at L'Anse aux Meadows on the northern tip of Newfoundland, but Wallace believes Hóp “likely resides in northeastern New Brunswick.” Wallace is essentially looking at an old problem in a new way and she told reporters at Live Science that she “believes Hóp was likely used as a summer camp, and any tents or buildings constructed there would have been used only for a few months at most, making them difficult for archaeologists to find.”

For several decades scholars have proposed a number of possible locations including “Newfoundland, Prince Edward Island, New Brunswick (on the east coast of Canada), Nova Scotia, Maine, New England and New York,” according to the In Live Science article. Wallace made her "northeastern New Brunswick" location assertion based on “the description of the settlement from sagas” which she married with archaeological observations made at L'Anse aux Meadows and Native American sites. 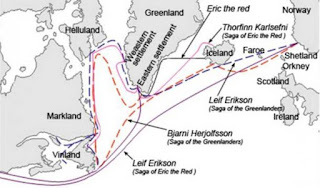 Graphical description of the different sailing routes to Greenland, Vinland (Newfoundland), Helluland (Baffin Island) and Markland (Labrador) travelled by different characters in the Icelandic Sagas, mainly the Saga of Erik the Red and the Saga of the Greenlanders. Modern English versions of the Norse names. ( CC BY-SA 3.0 )

Wallace is convinced the lost settlement is “in the Miramichi-Chaleur bay area” and while she has pin-pointed a geographic area, she told reporters at Live Science that the oral nature of Viking tales, before they were written down, may have confused the meaning of Hóp. She said “Hóp may not be the name of just one settlement, but rather an area where the Vikings may have created multiple short-term settlements whose precise locations varied from year to year.” 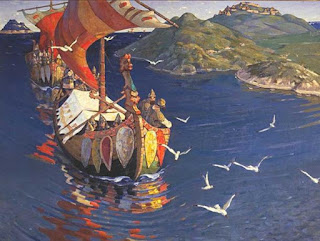 Zeroing in on Hóp
According to Wallace, because northeastern New Brunswick contains “wild grapes and salmon, barrier sandbars and a native population that used animal-hide canoes,” it perfectly fits the descriptions in the sagas. What’s more, Wallace noticed that "New Brunswick is the northern limit of grapes, which are not native either to Prince Edward Island, Nova Scotia or Maine. Additionally, "barrier sandbars” are particularly dominant along the New Brunswick east coast, and “Wild salmon was abundant in eastern New Brunswick at the time.” Wallace also pointed out that “hide canoes” were used by the Mi'kmaq people in the Miramichi-Chaleur bay area, and that they used the salmon as a totem animal.

Archaeologists really are up against the odds, in that not only has any organic Viking matter rotted away, but the “Miramichi-Chaleur bay area has changed, and any Viking site (or sites) could be paved over,” said Wallace. 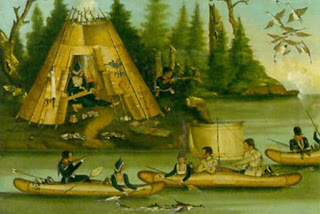 Wallace is not the first archaeologist to associate New Brunswick with Norse explorers. In a 1959, Frederic J. Pohl’s identified seventeen “parallel details” between the legendary Scottish sea captain Henry Sinclair of Roslin, and a semi-mythological giant creator god of indigenous mythologies named Glooscap. Pohl’s suggestion that Henry Sinclair sailed to a Viking settlement in New Brunswick in 1398 has recently been hijacked by story writers at History Channel who hold Sinclair as their #1 suspect for having created the illustrious “money pit” on Oak Island, in Mahone Bay in Nova Scotia. And, what will no doubt be presented very soon is… Oak Island and its “money pit” are but a stone’s throw from the south coast of New Brunswick, where Wallace believes Hóp will be found.

The trouble with even entertaining the idea that Henry Sinclair sailed to the New World in 1398, is that with “him” comes a murky bag of myths about treasures taken from the Holy Land being hidden beneath Rosslyn chapel in Scotland, and in 1398, that treasure being taken by a flotilla of Knights Templar to the Money Pit on Oak Island. Having recently published a book entitled Secret Viking Sea Chart, on the subject of Rosslyn Chapel and Viking navigation , I personally find that although Vikings were in North America over 1000 years ago, the idea that Henry Sinclair made the voyage in 1398 is seeing ducks in clouds, as not a shred of tangible evidence backs up the claim. It is all speculative. As for the theory of Wallace, it remains to be tested by finding some physical evidence, but perhaps this research will give archaeologists a better idea of where they might dig in the spade.

By Ashley Cowie
Posted by Mary Ann Bernal at 1:30 AM