Medieval Forensics: Investigating the Death of a Byzantine Emperor 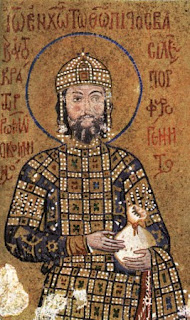 Mosaic of John II Komnenos in the Hagia Sophia, Istanbul.

John II Komnenos (1087-1143) was an accomplished and successful medieval ruler whose death has long been the subject of scholarly discussion. While out hunting, John was allegedly poisoned by an arrow – but was this really the cause of the emperor’s death? Mosaic of John II Komnenos in the Hagia Sophia, Istanbul.

The article, ‘The death of the Byzantine Emperor John II Komnenos (1087–1143)’, begins by taking a brief look at the life and reign of John II. The eldest son of the emperor Alexios I Komnenos, at the time of his ascension John had to overcome an attempted coup by his younger brother Isaac. Despite this uncertain beginning, over his twenty-five year reign John went on to become a strong military and political ruler of the Byzantine Empire.

In 1142, John launched a military expedition to Syria in an effort to reconquer the city of Antioch, currently held by Raymond of Poitiers. While out hunting boar in the spring of 1143, as the army was getting ready to leave its winter quarters, John received a superficial injury from a poisoned arrow he carried. Just over a week later, the emperor was dead.

According to the authors, ‘The events surrounding the death of John Komnenos are mainly derived from the accounts of the historians of the twelfth century Byzantine Empire John Cinnamos and Niketas Choniates‘, and, ‘Both historians attribute the death of the emperor to the effects of the poison that the arrow carried‘.

Critically, however, in their efforts to investigate these accounts, the authors are quick to acknowledge the risks of retrospective diagnosis: ‘First of all, one should point out that every search concerning the cause or type of disease in ancient periods is always hypothetical and controversial, and therefore should be addressed with utmost care.’ 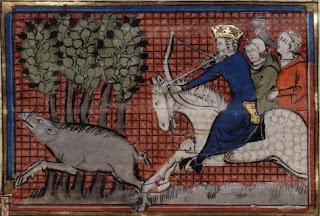 A close analysis of poisons, especially serpent venom, used in such situations and their common effects leads to the conclusion that the immediate symptoms did not present themselves in John II’s case. ‘On the contrary, the long period of time before the presentation of symptoms should be attributed to their being caused by an infection.’ The long delay between the emperor’s supposed poisoning and his death, the authors hypothesise, point toward septicaemia. Foul play is further ruled out, due to the fact that John II’s heir, his son Immanuel, was already the preferred choice of the Byzantine nobility.

Still, as with all cases of medieval medical mystery, the fact remains that ‘it must be stressed out that this conclusion is strictly based on historical testimonies of the era; hard scientific evidence in the contemporary sense to support such a conclusion is missing and it is highly unlikely to be obtained in the future.’

BY NATALIE ANDERSON
Posted by Mary Ann Bernal at 2:00 AM