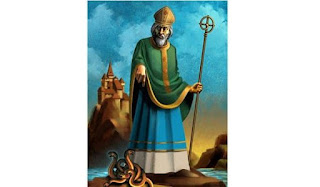 Today marks Saint Patrick’s Day, or the Feast of Saint Patrick, a cultural and religious holiday celebrated every year on 17th March in Ireland and by Irish communities around the world. The celebration marks the anniversary of Saint Patrick’s death in the fifth century and represents the arrival of Christianity in the country. The Irish have observed this day as a holiday for over 1,000 years, and while the festival began as a religious feast day for the patron saint of Ireland, today it has become an international celebration of Irish culture.

Over the centuries, the mythology surround the life of Saint Patrick has become ever more ingrained in the Irish culture. Patrick, the patron saint of Ireland, is credited with expelling all the snakes from Ireland, and today, not a single snake can be found there. But the true meaning of the casting away of all snakes runs much deeper.

Saint Patrick was born in Roman Britain in the 4th century AD, into a wealthy family. According to the Declaration, he was kidnapped by Irish raiders at the age of sixteen and taken as a slave to Gaelic Ireland. There he spent six years working as a shepherd and during this time he “found God”. The Declaration says that God told Patrick to flee to the coast, where a ship would be waiting to take him home. After making his way home, Patrick went on to become a priest.

According to tradition, Patrick returned to Ireland to convert the pagan Irish to Christianity. The Declaration, a Latin letter which is generally accepted to have been written by St Patrick, says that he spent many years preaching in the northern half of Ireland and converted "thousands". Tradition holds that he died on 17 March and was buried at Downpatrick. Over the following centuries, many legends grew up around Patrick and he became Ireland's foremost saint. While his true name was Maewyn Succat, he later became known as St Patrick, named after his place of burial.

The symbol of the shamrock
On St Patrick's Day it is customary to wear shamrocks and green clothing. St Patrick is said to have used the shamrock, a three-leaf clover, to explain the Holy Trinity to the pagan Irish. This story first appears in writing in 1726, though it may be older. In pagan Ireland, three was a significant number and the Irish had many triple deities. The triple spiral symbol, or Triskelion, appears at many ancient megalithic and Neolithic sites in Ireland. It is carved into the rock of a stone lozenge near the main entrance of the prehistoric Newgrange monument in County Meath, Ireland. Newgrange, which was built around 3200 BC, predated the Celtic arrival in Ireland but has long since been incorporated into Celtic culture.

An Irish shamrock on the left, and the triple spiral symbol on the right.

St Patrick banishes the snakes from Ireland
The absence of snakes in Ireland gave rise to the legend that they had all been banished by St. Patrick chasing them into the sea after they attacked him during a 40-day fast he was undertaking on top of a hill. However, all evidence suggests that post-glacial Ireland never had snakes. Water has surrounded Ireland since the end of the last glacial period, preventing snakes from slithering over; before that, it was blanketed in ice and too chilly for the cold-blooded creatures. Scholars believe the snake story is an allegory for St Patrick’s eradication of pagan ideology.

The snake was the symbol of the Celts and their spiritual elite, the Druids - who inhabited the island of Ireland long before the arrival of Christianity in the 5th century AD. When Patrick arrived, the only “pesky and dangerous creatures” that St Patrick wished to cast away were the native Celts.

Since snakes often represent evil in literature, "when Patrick drives the snakes out of Ireland, it is symbolically saying he drove the old, evil, pagan ways out of Ireland [and] brought in a new age," said classics professor Philip Freeman of Luther College in Iowa. 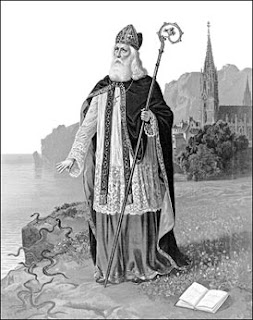 An Image depicting St Patrick casting the snakes into the sea. Image source

St Patrick features in many stories in the Irish oral tradition and there are many customs connected with his feast day. Over the centuries, these traditions have been given new layers of meaning – the symbolic resonance of the St Patrick figure stretches from that of Christianity’s arrival in Ireland to an identity that encompasses everything Irish.

Today, St Patrick is a patriotic symbol along with the colour green and the shamrock. St. Patrick's Day celebrations include many traditions that are known to be relatively recent historically, but have endured through time because of their association either with religious or national identity.

By April Holloway
Posted by Mary Ann Bernal at 1:00 AM