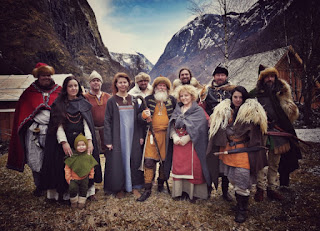 Colorful Vikings: It is known that Vikings did wear colorful clothing of wool, hemp and nettle – but what kind of underwear did they use? (Photo: Tufte Photography / vikingvalley.no)

It is hard to imagine Eric Bloodaxe and other feared Viking kings and chieftains wearing blue linen underwear. However, if the research carried out at the University of Bergen is correct, we should get used to the idea.

Textile fragments from Viking graves in the counties of Rogaland, Sogn og Fjordane and Hordaland in Western Norway have now been analyzed.

Research carried out by textile conservator Hana Lukešová and professor of nanophysics Bodil Holst at the University of Bergen has produced remarkable results: Vikings did use linen underwear, often dyed blue.

The two researchers examined tiny fragments from over a hundred different objects with a polarization microscope, something that has provided new and surprising knowledge.

The fact that plant fibers easily dissolve has made the research work extremely challenging.

Clothing worn in direct contact with the skin is very rarely preserved. Outer clothing made of wool, hemp and nettle are more resistant to being buried underground for hundreds of years.

In the Viking Age, the flax plant (used to produce linen), hemp and nettle were used for production of clothes while other types of textiles not yet had been introduced in Scandinavia. 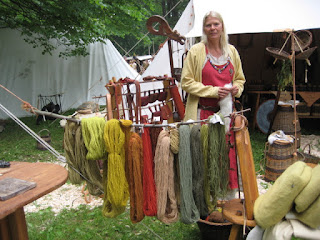 The Vikings extracted colors from roots, plants and insects. In addition, there were imported some dyes from Constantinople and other trade hubs. (Photo: fargeneforteller.blogspot.no)

Wealthy Vikings had access to imported silk, but silk fabric was so exclusive that it often was cut into ribbons and used for decoration.

In graves containing textile fragments, loom weights are often found. This is telling us that it is not unlikely that the linen underwear is produced by the Vikings themselves.

Some of the examined linen textiles were dyed blue. The color was obtained from woad plants containing a mixture of blue indigo dye (or indigotin) and smaller quantities of other dyes including the reddish dye indirubin.

According to textile conservator Lukešová, the fabrics may have been woven and dyed locally in Western Norway.

All the textile fragments were found in graves containing wealthy Vikings. What kind of underwear (if any) common people did use the researchers have no answer to. Nor can they tell if blue linen fabric was used for underwear for both men and women.

Lukešová and Holst’s research results have been published in the Journal of Archeological Science:

Text by: Thor Lanesskog, ThorNews
Posted by Mary Ann Bernal at 2:00 AM