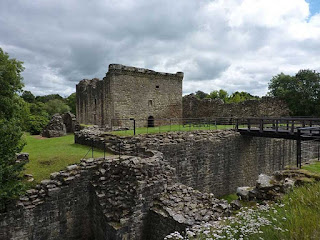 A 16th century Scottish castle survived decades of battles, attacks, civil war and treason but has been forced to close due to one very angry badger, which has taken up residence in Cellar Tunnel.

Sturdy Construction
Craignethan Castle is an early artillery fortification in South Lanarkshire, Scotland, built around 1530 AD by the influential Hamilton family. While much of it is in ruins, an impressive tower and fortifications have stood the test of time, and thousands of visitors enjoy the castle and its picturesque grounds every year.

Badger in the Basement
However, part of the castle was forced to close to the public on 12 April after a new invader took control of the cellar tunnel – a “very angry badger”, The Independent reports.

Historic Scotland didn’t elaborate on why the badger is so angry, but it has been wreaking havoc in the tunnel, digging through loose soil in the stonework and turning some of the areas into rubble. Staff have been unsuccessfully trying to lure it out with cat food and honey, but the badger was having none of it. Clean-Up Historic Scotland confirmed via Twitter that the castle’s most recent invader has now vacated the premises and they are “doing a little housekeeping” following its visit. “While our furry friend left the building over the weekend, we can confirm the #CraignethanCastle cellar tunnel remains closed this week,” Historic Scotland tweeted. “Our work team on-site need to repair some of the stone masonry the badger damaged. The rest of the castle is open for visitors.” 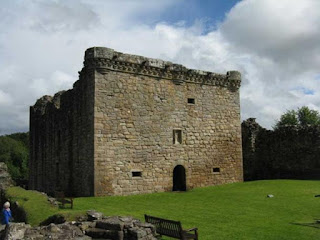 Castle History
Craignethan Castle was built by Sir James Hamilton of Finnart, once head of the second most powerful family in Scotland. He was one of the richest landowners in southern Scotland but was executed by King James V in 1540, after the king became convinced he was plotting against him, an accusation that is believed to be untrue.

In its heyday, the castle hosted many important visitors including Mary, Queen of Scots, who was sheltered there prior to her defeat at the Battle of Langside in 1568.

The castle was attacked in 1579 and given up without a siege. Its defences were demolished and the castle passed to the Hays family and remained with them until placed in State care in 1949. Today it is looked after by Historic Environment Scotland.

By April Holloway
Posted by Mary Ann Bernal at 1:30 AM