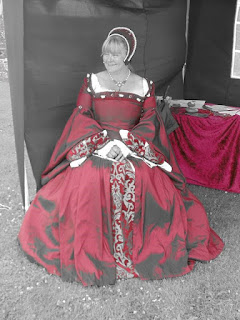 Judith’s novels concentrate on strong female characters from English history. Her trilogy of Margaret Beaufort, The Beaufort Chronicle, provided Margaret with a credible voice. She does much the same in this novel of Mary Tudor, Queen of England. Mary, due to the violent punishment she inflicted on heretics has come to be viewed as little short of a monster. In this novel, Mary isn’t white-washed; she is simply allowed to tell her own story. Judith says:

‘I always think it would be awful if, after my death, I was only remembered for the very worst thing I’ve ever done. Everyone is guilty of something, and people like Mary, and her father Henry VIII carried out horrible deeds. Unfortunately, those actions have come to define them. Burning anyone to death seems terrible to us but it was the standard punishment for heresy in the 16th century. It would be wrong to look upon Mary as some half-mad monster, glibly sending Protestants to their death. There was much more to her than cruelty. She was kind, generous and terribly well-meaning. She adored her people but her reign wasn’t as benign as she intended. My study of Mary Tudor revealed a sad, isolated and desperate woman whose intention was to be a good and loving Queen. The fact things turned out rather differently were mostly due to exterior forces. In The Heretic Wind, the mortally sick and embittered Mary looks back on her life and explains to some extent, the reasons why things happened as they did. 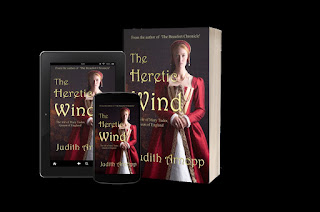 Adored by her parents and pampered by the court, the infant Princess Mary’s life changes suddenly and drastically when her father’s eye is taken by the enigmatic Anne Boleyn.

Mary stands firm against her father’s determination to destroy both her mother’s reputation, and the Catholic church. It is a battle that will last throughout both her father’s and her brother’s reign, until, she is almost broken by persecution. When King Edward falls ill and dies Mary expects to be crowned queen.

But she has reckoned without John Dudley, the Duke of Northumberland, who before Mary can act, usurps her crown and places it on the head of her Protestant cousin, Lady Jane Grey.

Furious and determined not to be beaten, Mary musters a vast army at Framlingham Castle; a force so strong that support for Jane Grey crumbles in the face of it, and Mary is at last crowned Queen of England.

But her troubles are only just beginning. Rebellion and heresy take their toll both on Mary’s health, and on the English people. Suspecting she is fatally ill, and desperate to save her people from heresy, Mary steps up her campaign to compel her subjects to turn back to the Catholic faith.

All who resist will face punishment for heresy in the flames of the Smithfield fires.

Judith Arnopp is the author of twelve Historical Fiction novels:

The Heretic Wind; the life of Mary Tudor, Queen of England
Sisters of Arden
The Beaufort Chronicles: the life of Lady Margaret Beaufort (three-book series)
A Song of Sixpence: the story of Elizabeth of York
Intractable Heart: the story of Katheryn Parr
The Kiss of the Concubine: a story of Anne Boleyn
The Winchester Goose: at the court of Henry VIII
The Song of Heledd
The Forest Dwellers
Peaceweaver