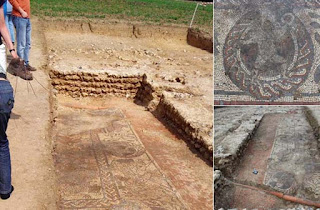 A rare and unexpected find that could be one of the UK’s most spectacular Roman mosaics, containing designs based on Greek legend, has been partially revealed during a community archaeology project dig in Berkshire. It has been described by experts as, ‘the best find of its kind in half a century’.

Boxford’s Community Project
The mosaic has been unearthed during the final stages of the ‘Revealing Boxford’s Ancient Heritage’ project, a community archaeology project to investigate 3 potential Roman sites around Boxford village in West Berkshire. According to Cotswold Archaeology, the project began in 2015 when records from a 19th century drainage ditch showed the possibility of a villa in the area. A collaboration involving historical and archaeological groups and local amateur volunteers was set up to investigate. In two previous year’s work, they uncovered a villa, a bath house and a farmstead. They have continued to explore this year, making some other interesting finds of a bracelet, coins and a plunge pool. However, the wholly unexpected find of such an elaborate and iconographic mosaic is definitely the ornate icing on the cake.

The mosaic at Boxford, Berkshire after cleaning. Note the Victorian plumbing to the right, the report for which was used to identify the position of the villa (Cotswold Archaeology)

A Mythical Mosaic
The mosaic was pieced together in the Roman villa during the 4th century (around 380 AD) during the late Roman period. The excavators revealed a 6 meter (20ft) portion of what is thought to be a 10 meter (33ft) square mosaic, with some damage to one corner due to the laying of Victorian drainage pipes. There is a red border of a half meter which is constructed from roof tiles cut into small squares (tesserae). Within this framing lie the real eye-popping treasures of the piece, an array of different dioramas of Greek legends, which amount to a ‘who’s who of mythical icons’, reports Newbury Today.

Classical art expert and member of The Association for the Study and Preservation of Roman Mosaics, Anthony Beeson, described it as, ‘without question the most exciting mosaic discovery made in Britain in the last 50 years,’ the Guardian reports, and went on to state it, ‘must take a premier place amongst those Romano-British works of art that have come down to modern Britons.”

Although less than half of the mosaic was unearthed, the depictions that have been seen show some rarity amongst other finds in Britain. "The range of imagery is beyond anything seen in this country previously," Duncan Coe, project lead officer at Cotswolds Archaeology, told IBTimes. He continued, "That includes some elements that are entirely unique to this site, which is why we've all got very excited about it. In terms of understanding the art history from this period of late Roman Britain, this is a unique find." 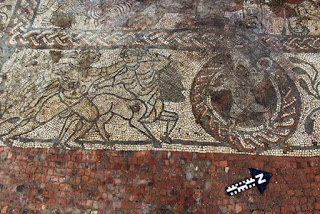 Part of the mosaic at Boxford, potentially depicting Hercules fighting a centaur, and Cupid (Cotswold Archaeology)

Iconography
Experts who have examined the fragment of the mosaic that has been exposed are pretty sure they have identified images of Atlas, Hercules, Cupid as well as the very distinctive winged horse, Pegasus. A man adorned in a lion skin and wielding a club in battle with a centaur is thought to be Hercules. Cupid is thought to be the male shown with a wreath in his left hand.

A less common iconography found in the partially obscured sideways scene has been interpreted by Beeson as representing the tale of Greek hero, Bellerophon. Bellerophon was sent to slay the mythical chimera, a beastly creature with a lion’s head, goat’s torso and serpent’s tail. Oh, and it breathed fire. The attacking position found here is one seen at only two other sites in the UK. Bellerophon is shown riding Pegasus to the ordeal and receiving a king’s daughter’s hand in reward. A fitting scene for a mosaic found in Britain, as this Greek legend is thought to have morphed into Christendom’s tale of St. George and the Dragon, as brought back from the east by the Crusaders.

Although the craftsmanship of the mosaic is not deemed to be of the highest quality and some of the details are crudely constructed, it is the rarity and range of designs included that makes the find stand out. 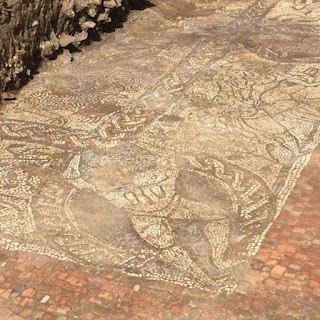 There are some questions though. Finding such a luxurious mosaic at this site is somewhat an anomaly, as the rest of the villa is of medium size and more modest. It leads Duncan Coe, project lead officer at Cotswold Archaeology to pose the questions of what kind of person with seemingly moderate means due to the size of the house, would want to portray such a cultured image? What’s more, what might have been happening in the local economy that provided them the wealth to commission it?

Coe, the Roman expert at Cotswold Archaeology explains how the questions that the mosaic raises makes it interesting archaeologically.

“The mosaic is a truly important find. Not only is it a fantastic new piece of Roman art from Britain, but it also tells us about the lifestyle and social pretensions of the owner of the villa at Boxford. That person wanted to project an image of themselves as a cultivated person of taste – someone familiar with classical mythology and high Roman culture, despite the fact that their villa was of relatively modest size in a remote part of the Roman empire. While this person was most probably of British origin, they wanted to be regarded by their friends, neighbours and subservients as a proper Roman.”

The project as a whole has revealed that the Roman population around Boxford was more extensive than had been known. The collaborative effort has dug up more than would have been imagined in the area and has been thrilling for the volunteers and professionals alike.

For now, the mosaic has once again been covered by dirt in order to protect it from the harmful effects of the elements, but there are hopes to return to the site in the future to excavate it in its entirety.

Top image: Various images of the find including a close up of the supposed Cupid figure (Cotswold Archaeology)

By Gary Manners
Posted by Mary Ann Bernal at 3:00 AM