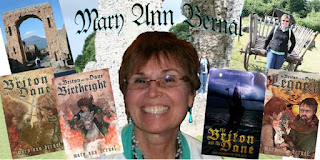 I have always been fascinated by how people perceive events or actions differently. Where I see a wounded soldier running a marathon with a prosthetic leg as a hero, someone else might see only a disabled person participating in a race meant for physically fit individuals.

Throughout history, perception has played a key role when assessing motivation but was the assessment correct, and if so, did the character in question agree with the end result or did the character believe something else? As the saying goes, one man’s terrorist is another man’s freedom fighter.

One of my favorite strong women of the middle ages is Eleanor of Aquitaine. Hollywood’s portrayal as seen in The Lion in Winter, which is an entertaining period piece and not historically accurate, showcases an intelligent woman adept at palace intrigue, who wishes to see her son, Richard, on the throne after Henry’s demise. It would seem the end-game for Eleanor’s scheming is to obtain her freedom, knowing Richard would have her released from confinement. But we must not forget Henry’s request for an annulment so he might marry his mistress. Eleanor comes across as manipulative and cunning and well-versed in deception. But is that how Eleanor sees herself?

Another Hollywood favorite is Camelot where the fair Guinevere betrays Arthur for Lancelot. Initially, whilst singing The Simple Joys of Maidenhood, she doesn’t think twice about causing a war, which comes to fruition at the end of the movie. Was there any thought given as to what warfare actually means? Was life worthless in her mind? But Guinevere recognizes she must remove temptation from Arthur’s court by having Lancelot sent away, reflected in the song If Ever I Would Leave You. Guinevere appears to be conflicted, but does she perceive herself as a victim because of an arranged marriage?

And then there is Troy. Helen is miserable in an alleged loveless marriage and runs off with Paris but Menelaus convinces his brother, Agamemnon, to help him get her back. Does history perceive Helen differently than she perceived herself? Possibly, more likely, probably. After all, Helen was the reason Troy fell. Did she regret her decision that led to the deaths of Hector, Achilles, and Paris? Was she reunited with Menelaus? Or did she relish the carnage?

Perception, as love, is in the eye of the beholder.

These epic blockbusters were paramount in my decision to write a novel wherein perception plays a major role when condemning or acclaiming the lead character.

It was an easy decision to choose an existing persona from The Briton and the Dane trilogy. Concordia was a child when the trilogy ends. Fast forward a few years and we have a nineteen-year-old young lady of privilege competing in a world where women and children were considered chattel.

Concordia is willful, used to getting her own way, and might be considered spoiled. Educated alongside her brother at the king’s court school, Concordia’s intelligence surpasses many of the men she comes in contact with. She absorbs knowledge like a sponge, is quick-witted, charming and very feminine, playing the game as befits societal expectations.

Outwardly, Concordia may have been adept at deception and intrigue, but at what cost? Was she a hardened conspirator whose sole purpose was to survive in a violent world or was she longing for a love that seemed to elude her grasp? Just as Scarlett O’Hara pined for Ashley Wilkes while married to Rhett Butler, Concordia appears to have made the same mistake.

Some of my readers saw beneath the facade, while others thought Concordia was a pampered, selfish brat. You be the judge. 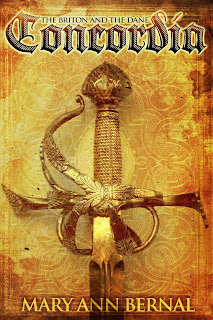 Enter Concordia, a beautiful noblewoman whose family is favored by the king. Vain, willful, and admired, but ambitious and cunning, Concordia is not willing to accept her fate. She is betrothed to the valiant warrior, Brantson, but sees herself as far too young to lay in the bedchamber of an older suitor. She wants to see the wonders of the world, embracing everything in it; preferably, but dangerously, at the side of Thayer, the exotic Saracen who charms King Alfred’s court and ignites her yearning passions.

Email ThisBlogThis!Share to TwitterShare to FacebookShare to Pinterest
Labels: Mary Ann Bernal, The Briton and the Dane Concordia