10 things you (probably) didn’t know about the Black Death 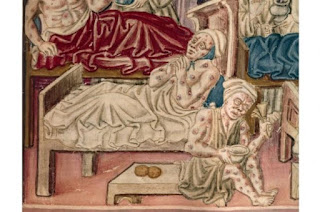 Plague victims in Perugia. From a 14th century manuscript of the vernacular text 'La Franceschina'. (Photo By DEA / A. DAGLI ORTI/De Agostini/Getty Images)

Open almost any textbook on western civilisation and it will claim that the Black Death felled one-third of Europe’s population. In fact, in some places such as a village on an estate in Cambridgeshire manorial rolls attest that 70 per cent of its tenants died in a matter of months in 1349, and the city of Florence tax records drawn up shortly before and after the Black Death suggest that its toll may have been about the same in 1348.
Yet, the plague skipped over or barely touched other villages, even within Cambridgeshire, and may not have infected at all vast regions such as ones in northern German-speaking lands. Given the state of record-keeping and preservation, we will probably never be able to estimate the Black Death’s European toll with any precision.

Not only textbooks but serious monographs on the Black Death and its successive waves of plague into the early 19th century in Europe go on about rats (usually the black ones) and fleas without qualification. But what is the evidence?
No contemporary observers described any epizootic [animal epidemic] of rats or of any other rodents immediately before or during the Black Death, or during any later plagues in Europe – that is, until the ‘third pandemic’ at the end of the 19th century. Yet in subtropical regions of Africa and China, descriptions of ‘rat falls’ accompanying a human disease with buboes in the principal lymph nodes reach back at least to the 18th century.
As for fleas, unlike during the ‘third pandemic’, when plague cases and deaths followed closely the seasonal fertility cycles of various species of rat fleas, no such correlations are found with the Black Death or later European plagues before the end of the 19th century.

3) The Black Death was not a disease of poverty

Not only do contemporary chroniclers list important knights, ladies, and merchants who died during the Black Death, but administrative records also point to a wide swath of the population felled in 1348–49. Furthermore, many wealthy and well-fed convents, friaries, and monasteries across Europe lost more than half of their members; some even became extinct.
However, by the third or fourth wave of plague in the last decades of the 14th century, burial records and tax registers reveal that the disease had evolved into one of the poor.

In 1348–49, some of the worst-hit regions were in mountainous and in relatively isolated zones, such as in Snowdonia in Wales or the mountain village of Mangona in the Alpi fiorentine, north of Florence, whose communications with cities were less frequent than places further down the slopes and closer to cities.
The experiences of these isolated villages may have been similar to small mining villages in Pennsylvania or in South Africa, or Inuit settlements in Newfoundland under attack by another highly contagious pandemic, the Great Influenza of 1918–19, in which they experienced mortalities from 10 to 40 per cent – many times higher than in New York City or London.

For reasons that are difficult to explain, cities such as Milan and Douai in Flanders, both major hubs of commerce and industry, appear to have escaped the Black Death in 1348 almost totally unscathed.
In the case of Milan, only one household fell victim to the disease, at least according to chronicles, and the plague was successfully contained. Meanwhile, Douai chronicles, monastic necrologies, and archival records (recording, for example, the deaths of magistrates, and last wills and testaments) show no certain signs of the plague entering that city until the plague of 1400.

In German-speaking lands, France along the Rhine, and parts of Spain, municipal governments, castellans, bishops, and the Holy Roman Emperor accused Jews of spreading the Black Death by poisoning foodstuffs and water sources, and massacred entire communities of men, women, and babies for these supposed crimes.
The accusations and massacres, however, were not universal between 1348 and 1351. Massacres did not arise in the British Isles (where, at least in England, Jews had been expelled in 1290 by Edward I), and no clear evidence pinpoints any such violence in Italy (except for the Catalans in Sicily). Nor are any massacres recorded in the Middle East.

The phrase ‘quarantine’ (the exclusion and isolation of those coming from infected regions, or of others suspected of carrying plague, to avoid them mixing with uninfected populations for a certain number of days) was coined in Venice in the early 15th century, based on a 40-day period of isolation (with Biblical resonances). But the city of Ragusa [present-day Dubrovnik] had beaten the Venetians to the punch in 1377 with a plague ‘quarantine’ of 30 days.
By the early modern period, ‘quarantine’ often had been curtailed further. The period deemed necessary to isolate suspected carriers in Milan during its plague of 1557–75, for instance, had dropped to eight daysfor certain categories of suspicion.

Clothes infected by the Black Death being burnt, c 1340. An illustration from the 'Romance of Alexander' in the Bodleian Library, Oxford. (Photo by Hulton Archive/Getty Images)

Cities that managed to keep plague beyond their borders were those that devised and implemented quarantine: border controls at city gates, harbours, and mountain passes; individual health passports (which identified a person and certified where he or she came from), and other related measures such as spy networks to signal when a plague had erupted in a foreign city or region.
Ragusa was a pioneer in this regard, with its earliest ‘quarantine’ and its increasingly sophisticated measures to isolate the infected and control its borders during the late 14th and 15th centuries. Its last plague was in 1533, while in England it was 1665–56, in the Baltic region 1709–13, and Northern Africa and the Middle East the 19th century. Many Italian regions followed Ragusa’s lead, and after them, other regions of western and central Europe.

9) Despite the thousands who sacrificed their lives assisting spiritually or physically the afflicted during the Black Death, the church awarded none of them with blessed or saintly status

From October 1347 in Sicily to the early 1350s further north, contemporary chroniclers decried peoples abandonment of sick family members, and criticised clergymen and doctors who were ‘cowardly’ in reneging on their responsibilities to escape the plague’s vicious contagion. However, occasionally contemporary writers also praised those who stayed on to nurse the afflicted, and who often lost their lives in so doing.
Curiously, the church did not recognise any of these martyrs during the Black Death with elevations to beatitude or sanctity.
The first to be so recognised did not appear until the 15th century, and those who intervened to help those afflicted by the plague (that is, during their own lifetimes and not as post-mortem miraculous acts) remained rare even during 16th and 17th centuries.

It is thought that the Black Death spread at a rate of a mile or more a day, but other accounts have measured it in places to have averaged as far as eight miles a day.
By contrast, scientists in South Africa, New Orleans, and other places affected by bubonic plague in the early 20th century devised experiments to clock their plague’s spread, and found it moving no faster than eight miles a year. It spread so slowly because modern bubonic plague was a rodent disease and often one dependent on the house rat.
These extreme differences in the spread of the Black Death and the bubonic plagues of modern times are seen despite the revolutions in transport with steam power, railway, and, by the early 20th century, automobiles.
Samuel Cohn is professor of medieval history at the University of Glasgow. He is the author of Cultures of Plague: Medical Thinking at the End of the Renaissance (Oxford University Press, 2010) and The Black Death Transformed: Disease and Culture in Early Renaissance Europe (Edward Arnold Publishers Ltd, 2002).
Posted by Mary Ann Bernal at 5:00 AM